An adventure in learning 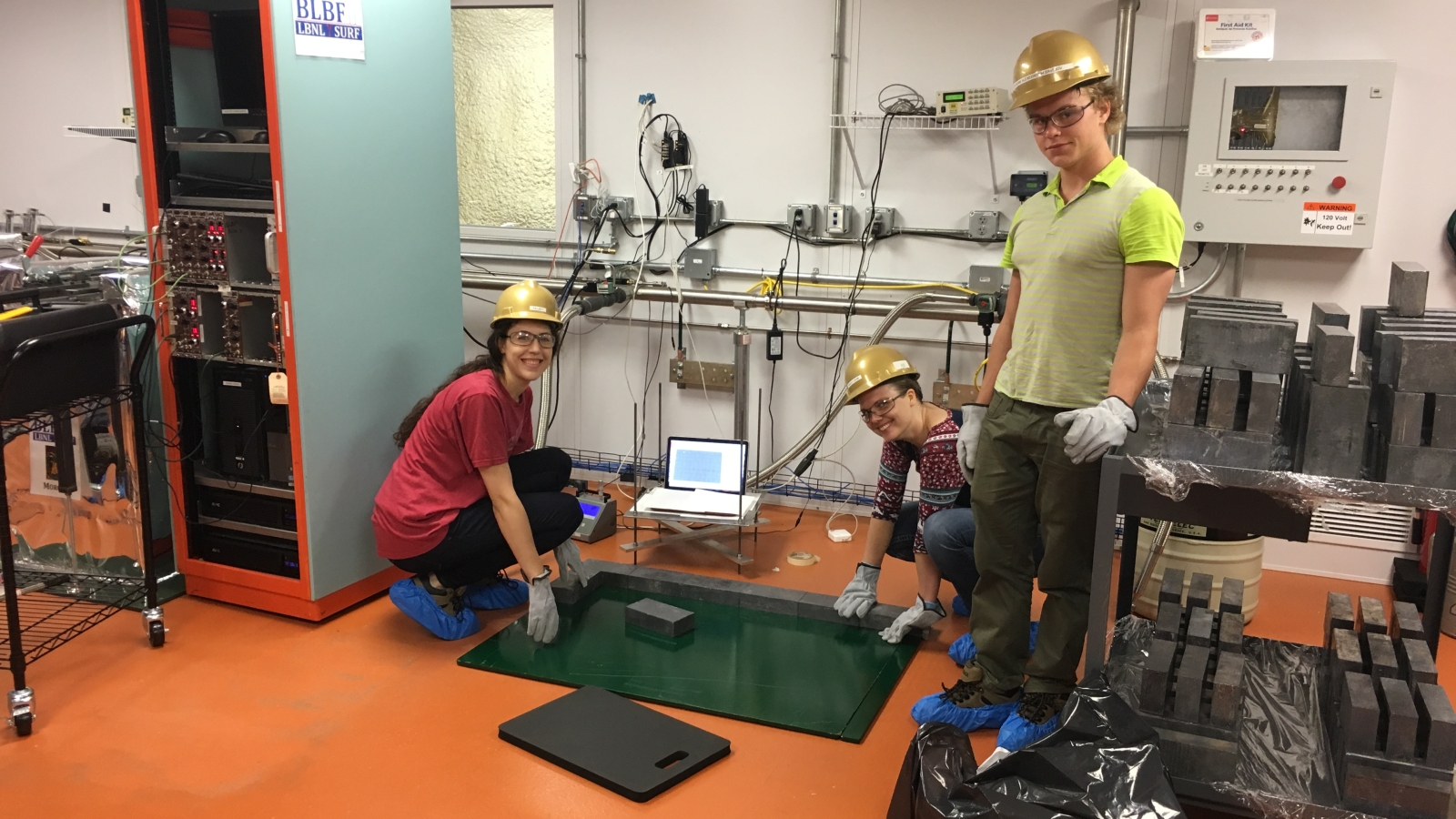 From left: Kelsey Oliver-Mallory, graduate student with UC-Berkeley, Bailey Leavitt and Theodore Savinovk, both with BHSU's Research Experience for Undergraduate students program, work on the lead shield for The Twins, a dual crystal low-background detector in the BHUC.

Kelsey Oliver-Mallory’s first few cage rides to the 4850 Level “felt like an adventure,” she said. Now, her trip to the Black Hills State University Underground Campus where she works in the low-background counting facility has become routine. But she still loves going to work there.

“I enjoy working on this project because it’s challenging and requires a lot of thought,” Oliver-Mallory said. “I’m never bored.”

Oliver-Mallory, a graduate student at the University of California-Berkeley, created the final designs for the shield that will surround the newest background detector, The Twins, a dual-crystal low-background assay device.

“Kelsey is the mastermind behind how The Twins detector is put together and for getting it up and running,” said Brianna Mount, assistant professor at BHSU and director of the underground campus.

Currently, the BHUC houses four operating low-background counters, each containing one high-purity germanium (HPGe) detector surrounded by a lead shield. The Twins detector contains two such crystals that surround the material being assayed and can be reconfigured to accommodate samples of different sizes. It is expected to begin running soon.

“Two detectors have twice the crystal mass leading to a two-fold increase in sensitivity,” Oliver-Mallory said.

Most of the materials being assayed at Sanford Lab are potential construction materials or completed components for LUX-ZEPLIN, or LZ, a second-generation dark matter experiment that will be located on the 4850 Level of Sanford Lab.

“LZ has a large queue of samples that vary in size and geometry. And for it to be successful in its search for dark matter, it needs materials that are as radio-pure as possible,” Oliver-Mallory said.

But even trace amounts of radioactive isotopes can interfere with an experiment’s results, which is why the background detectors are placed nearly a mile underground and surrounded by lead and copper shields. “This allows the germanium detectors to see tiny amounts of gamma ray radiation in the materials they are screening," Oliver-Mallory said.

Right now, several hundred photomultiplier tubes (PMT) that will be used in LZ to detect flashes of light are being assayed, a process that can take up to three weeks for a single PMT.

“With two crystals, we cut that time in half and get a higher level of sensitivity,” said Kevin Lesko, senior physicist at Lawrence Berkeley National Lab and a collaborator with LZ. “It’s also convenient to have this system so close to where the experiment is. Even the Majorana Demonstrator project has made use of the low-background counting facility.”

As work on The Twins progresses, Oliver-Mallory continues to take on a more active role.

“In the final stages, I will carry out relevant calibrations and write algorithms for analyzing and simulating data from the detector,” she said. “But as a graduate student, it’s my role to constantly learn from those around me and take on more responsibility. I owe a lot to my advisor, Kevin Lesko, and to Keenan Thomas who created many of the initial designs.”