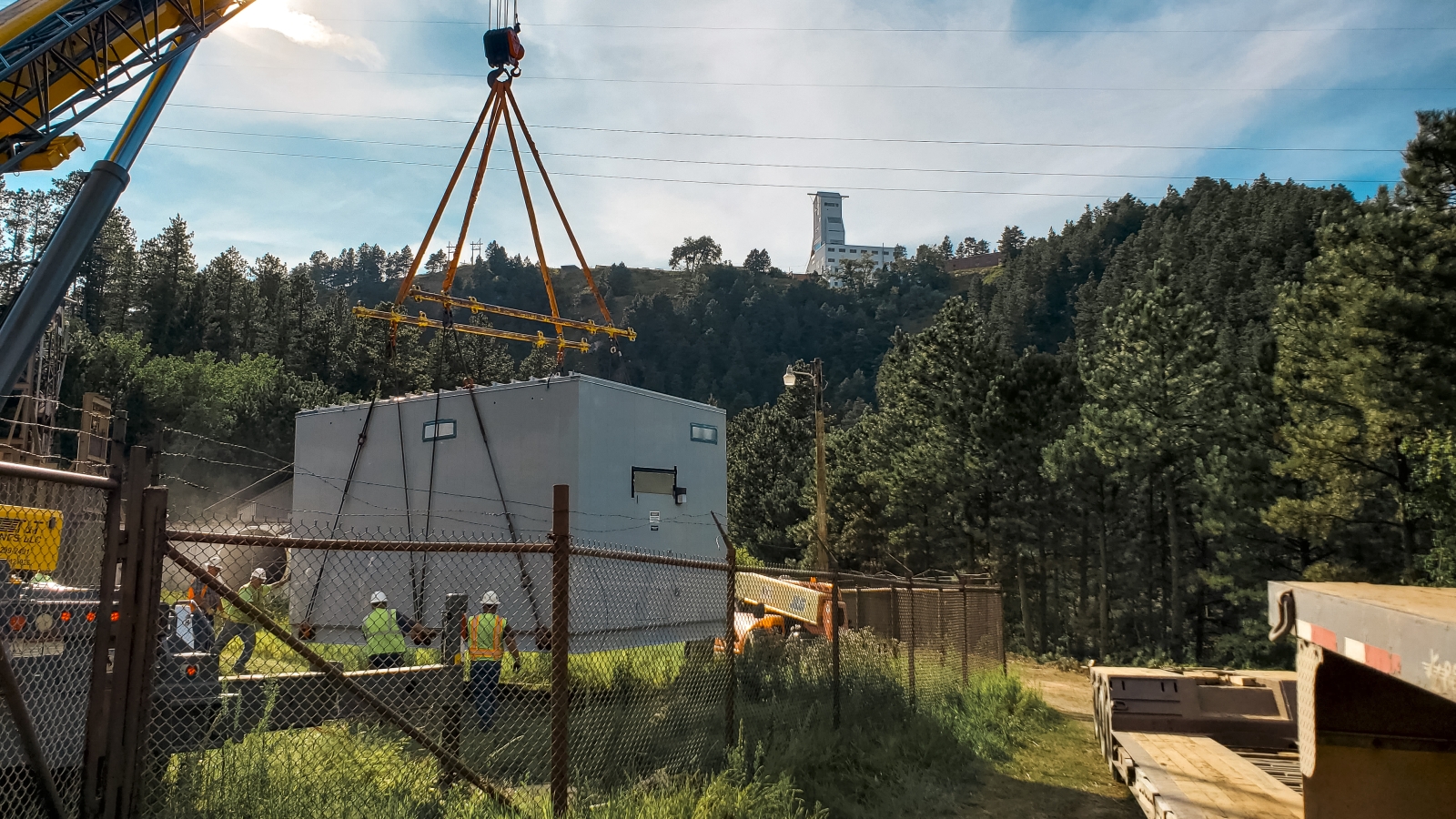 A crane lowers the prefabricated E-House containing the new Variable Frequency Drive onto a concrete slab near the Oro Hondo Shaft along Kirk Road, with the Sanford Underground Research Facility’s Ross Headframe in the background.

Several projects are underway at Sanford Underground Research Facility (Sanford Lab) to improve the reliability of the facility’s infrastructure. Crews are improving the facility for its role as the Far Site for Fermi National Accelerator Laboratory’s Long Baseline Neutrino Facility (LBNF), which will house the largest physics experiment on United States soil: The Deep Underground Neutrino Experiment (DUNE).

The LBNF project recently completed an upgrade of the Oro Hondo Fan, replacing its variable frequency drive (VFD). The Oro Hondo Fan is the main ventilation fan for the underground facility and is located on the surface along Kirk Road near Lead. This upgrade, completed with the support of Sanford Lab and four local contractors, ensures dependable ventilation in the underground spaces at Sanford Lab.

The project included the removal of the former VFD and the stick-built structure that housed it. These were replaced by a prefabricated Electrical House (E-House) and VFD, specifically designed for use at the Oro Hondo Shaft.

Josh Willhite, Fermilab’s LBNF conventional facilities manager for the work in South Dakota, explained that this upgrade increases the reliability of the underground ventilation system; such dependability is critical for future LBNF excavation and construction, as well as DUNE science.

“With the use of diesel-powered excavation equipment, followed by world class science underground, we need to make sure there is no preventable disruption to airflow or to our work,” said Willhite.

“Other experiments will benefit from this upgrade as well as it pulls in more fresh air through these ventilation systems,” said Headley.

“As is always the case when coordinating these efforts with Sanford Lab, the coordination and integration of all parties has been very good,” said Willhite.

DUNE, which is hosted by Fermilab, will consist of two neutrino detectors placed in the world’s most intense neutrino beam. One detector will record particle interactions near the source of the beam, at Fermilab in Batavia, Illinois. A second, much larger, detector will be installed more than a kilometer underground at Sanford Lab—1,300 kilometers downstream of the source. These detectors will enable scientists to search for new subatomic phenomena and potentially transform our understanding of neutrinos and their role in the universe.

The Long-Baseline Neutrino Facility will provide the neutrino beamline and the infrastructure that will support the DUNE detectors. Funding for the LBNF construction prep work comes from the Department of Energy Office of Science.