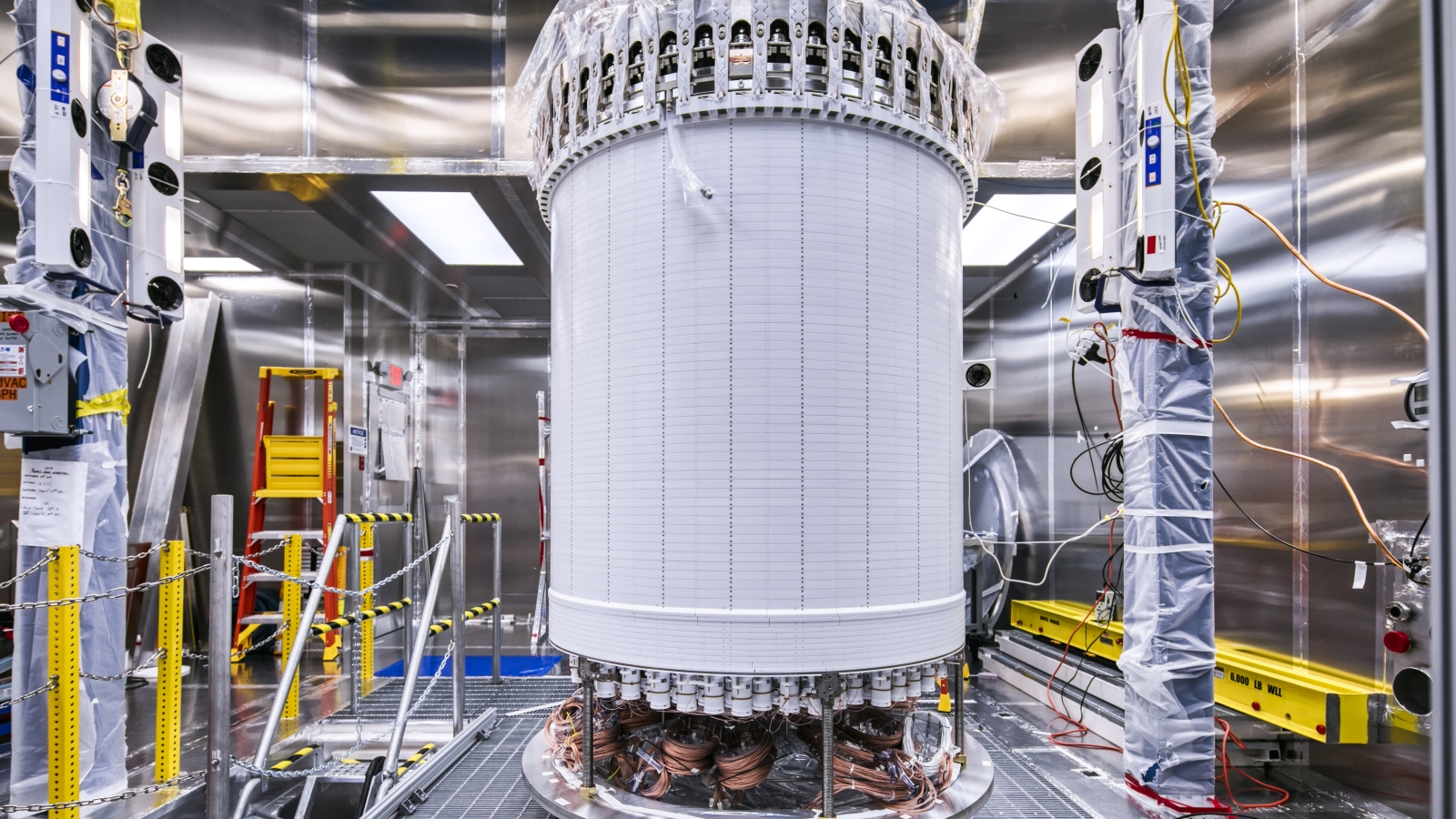 On July 26, researchers working in the Surface Assembly Lab (SAL) at the Sanford Underground Research Facility (Sanford Lab) had quite an audience. Nearly a dozen onlookers, including researchers, technicians and one very curious writer, peered through two windows into the cleanroom. From this vantage point, they watched researchers carefully peel back a protective layer of foil to reveal—for perhaps the last time in half a decade—the innermost piece of the LUX-ZEPLIN (LZ) dark matter experiment.

“This xenon detector will be at the heart of the LZ dark matter experiment,” said Henrique Araújo, Imperial College London, who leads the LZ collaboration efforts in the UK and co-led the development of the TPC with Tom Shutt from SLAC National Accelerator Laboratory (SLAC). The U.S. Department of Energy’s Lawrence Berkeley National Laboratory (Berkeley Lab) is leading the LZ project.

“The TPC is a complex system and it's a major achievement to have it fully assembled,” Shutt said.  “It takes us one important step closer to being able to look for dark matter. It is also gratifying because it involved assembling a large number of sub-systems designed and built by groups across the US and the UK over a number of years. So, it’s a coming together of sorts for the collaboration.”

While it was unwrapped, researchers in full-body cleanroom suits took final measurements and ran tests on the instrument, which will soon be sealed inside a cryostat vessel and transported to the 4850 Level of Sanford Lab. Once installed underground, the TPC will be hidden within layers of protective shielding until the experiment has finished taking data.

“We have some things in common with a space program,” said Araújo. “Before you launch, you do all of your work on the ground for years, perfecting the engineering so your instrument will work no matter what. LZ is a bit like a space experiment, just headed the opposite direction. We cannot expose it to underground air—that would compromise its performance. Once you deploy it underground, that's it. It has to work.”

Piecing together the detector

The assembly of the TPC began in December 2018, when components first began arriving at Sanford Lab. Dozens of institutions across the globe had been fabricating components since 2015 or participating in the assembly.

“In creating these components, we paid a lot of attention to selecting and screening materials with low radioactive contamination and low radon emission to lessen any potential background interference within the detector,” said Tomasz Biesiadzinski, a project scientist with SLAC who has led the assembly effort at Sanford Lab. In all, tens of thousands of specially designed components were integrated into the detector.

Since December 2018, the assembly team tallied 13,500 working hours at the SAL and drew from a broad reserve of expertise to properly address the mechanical, optical, electrical, cleanliness and background requirements of each component. With 250 members from 37 institutions around the globe and support from Sanford Lab’s support scientists and engineers, expertise covering all these areas was readily available.

“This type of experiment is still done the old-fashioned way—where the principal investigators, students, postdocs, engineers and technicians all work together to build it,” said Araújo. “The expertise that you need in order to assemble the experiment is so vast that you have to have a diverse group onsite. And working alongside people from these different backgrounds adds great joy to our time here.”

One researcher who contributed a substantial number of those hours was Nicolas Angelides, LZ collaboration member and graduate student at University College London, who presided over much of the cleanliness program for the TPC assembly.

“Dust particles can disrupt the detector signals,” said Angelides. “Dust also contains trace amounts of radioactivity, creating a background we need to control ahead of time.”

To protect against stray dust particles and radon—an atmospheric gas that could contaminate the detector—the entire assembly process took place within the Surface Assembly Lab, a laboratory space with a radon-reduction system and a class-100 clean room outfitted specifically for the TPC assembly. Within the clean space, strict cleanliness protocols are followed.

“All walls and floors are vacuumed and wiped down at least every week. Anything that can’t be wiped is put in an ultra-sonic bath, where sound waves are sent through a solvent to dislodge all small particles from every nook and cranny,” said Angelides.

High-efficiency air filters remove dust particles, some smaller than a single organic cell. If the air-particle concentration inside the room gets too high, an alarm will sound, alerting researchers to cover the detector. Because static electricity attracts dust, the assembly area is surrounded by neutralizing fans that quickly dissipate static charge. A total of twenty-six of these fans were pointed at the TPC alone.

Workers themselves pose a contamination risk to the experiment, as humans are a major source of dust. “We wear full-coverage cleanroom suits and follow a two-stage gowning procedure,” said Angelides. “Every step closer to entering the cleanroom is held to higher cleanliness standards and requires additional levels of gear. It takes a good quarter of an hour just to get to work!”

“What LZ has done more than any other project in the field is control the cleanliness of the materials and the assembly process,” said Araújo. “At the end of the day, nothing goes into the cleanroom or touches the detector that is not extremely clean.”

The design of LZ’s detector has been developed over decades of experimentation, including multiple iterations of the ZEPLIN program and the Large Underground Xenon (LUX) detector, from which LZ derives its name. The ZEPLIN program was the first to develop the liquid xenon TPC concept employed by LZ. In 2013, LUX had been declared the most sensitive dark matter detector in the world and retained that status until 2017—one year after it had been decommissioned.

“LZ sits on the shoulders of a number of smaller experiments,” said Araújo. “Each experiment solved their own issues at their own scale. By getting larger one step at a time, we have been able to search for new physics with ever larger experiments, and we are confident that LZ will work as it is designed to.”

Once underground, the detector will be cooled down and filled with ten tons of liquid xenon. This very dense liquid is an ideal medium for dark matter detection.

Researchers believe that if a dark matter particle interacts with a xenon atom, it will produce two flashes of light. The first flash occurs when the particle collides with the xenon atom; from this interaction some electrons are shaken off the xenon too. Then, guided by an imposed electric field, the electrons drift toward the top of the detector and are accelerated through a layer of gaseous xenon above the liquid, producing a second flash of light.

Although these flashes would be imperceptible to the human eye, the detector is lined with hundreds of photomultiplier tubes. These ultrasensitive sensors are capable of amplifying a signal from even a single photon of light.

“This TPC concept in which a single interaction produces two signals—the primary and secondary scintillations—is a powerful way to detect radiation,” Araújo said. “This is the technology that has been leading these dark matter searches because it allows us to say, with the precision of a few millimeters, where each interaction happens, and whether it is signal-like or background-like, which we can tell by the relative sizes of the two flashes of light.”

“A leading candidate for dark matter is the weakly interacting massive particle,” said Araújo. Different experiments world-wide are looking for this particle, endearingly nicknamed the WIMP (weakly interacting massive particle), within different regions of mass. LZ is designed to search for a particle within a mass region of a few protons to a few tens of thousands of protons.

“If there are particles in that mass range, we should have the world-leading sensitivity to spot them first,” said Araújo.

Major support for LZ comes from the DOE Office of Science, the South Dakota Science and Technology Authority, the UK’s Science & Technology Facilities Council and by collaboration members in South Korea and Portugal. 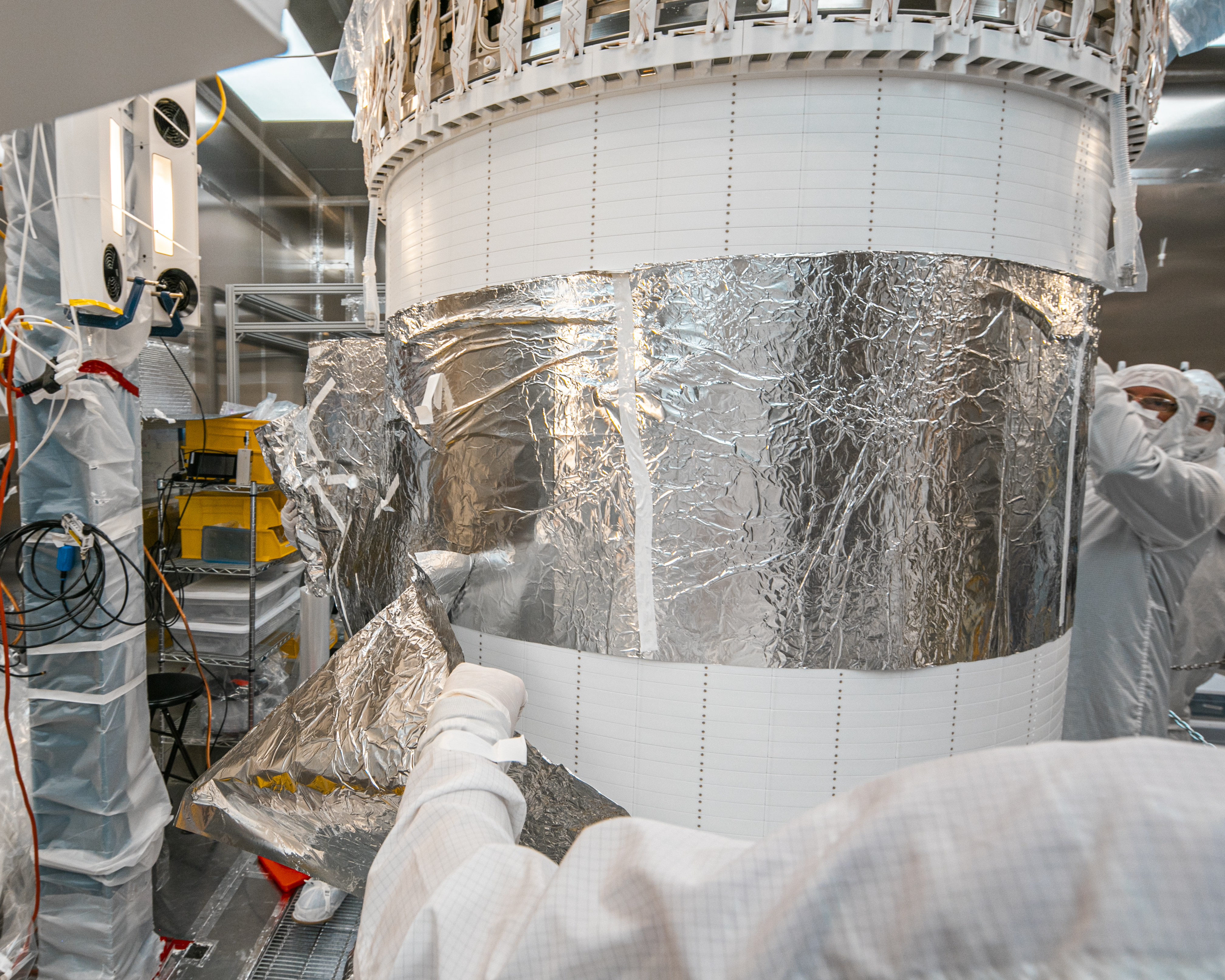 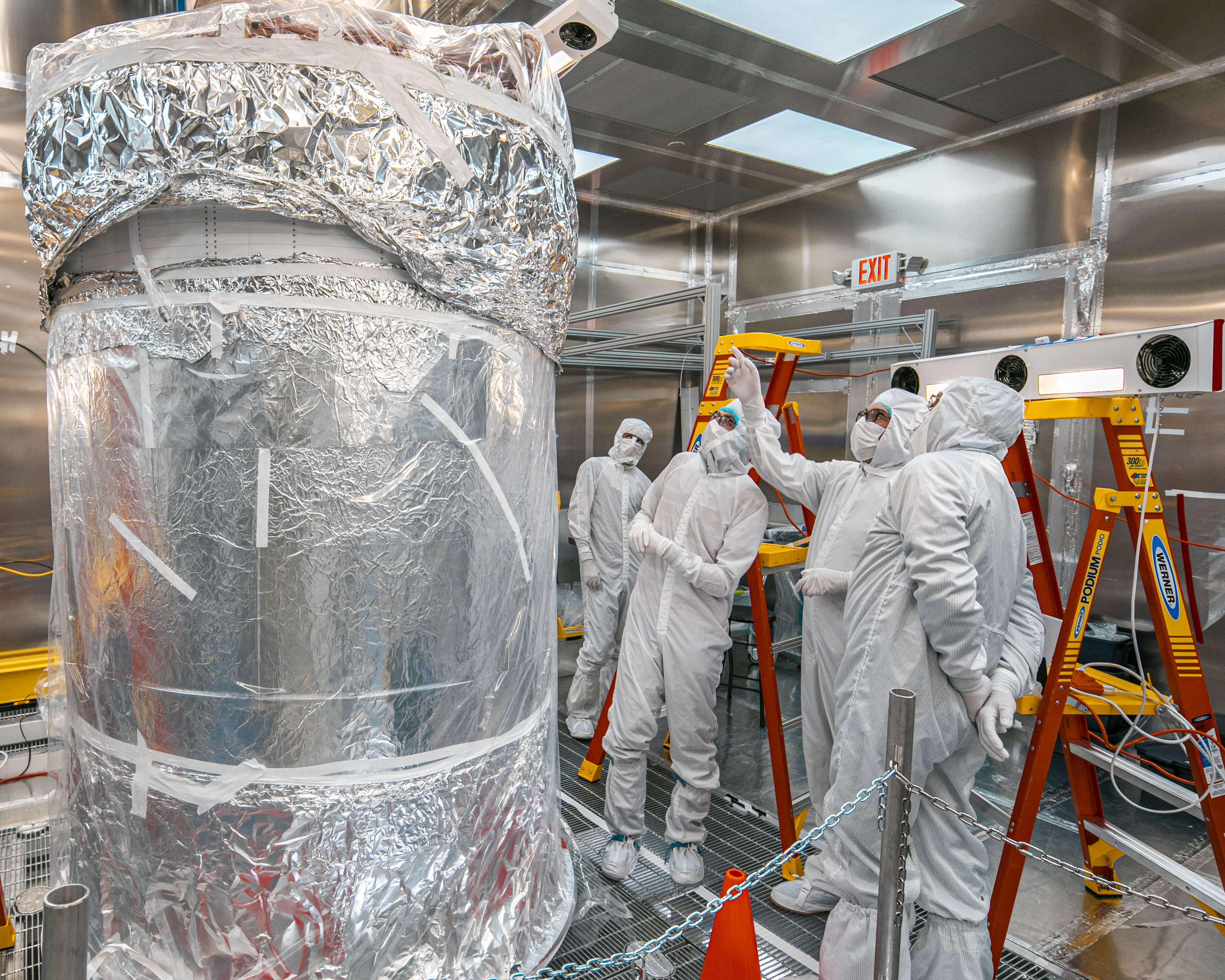 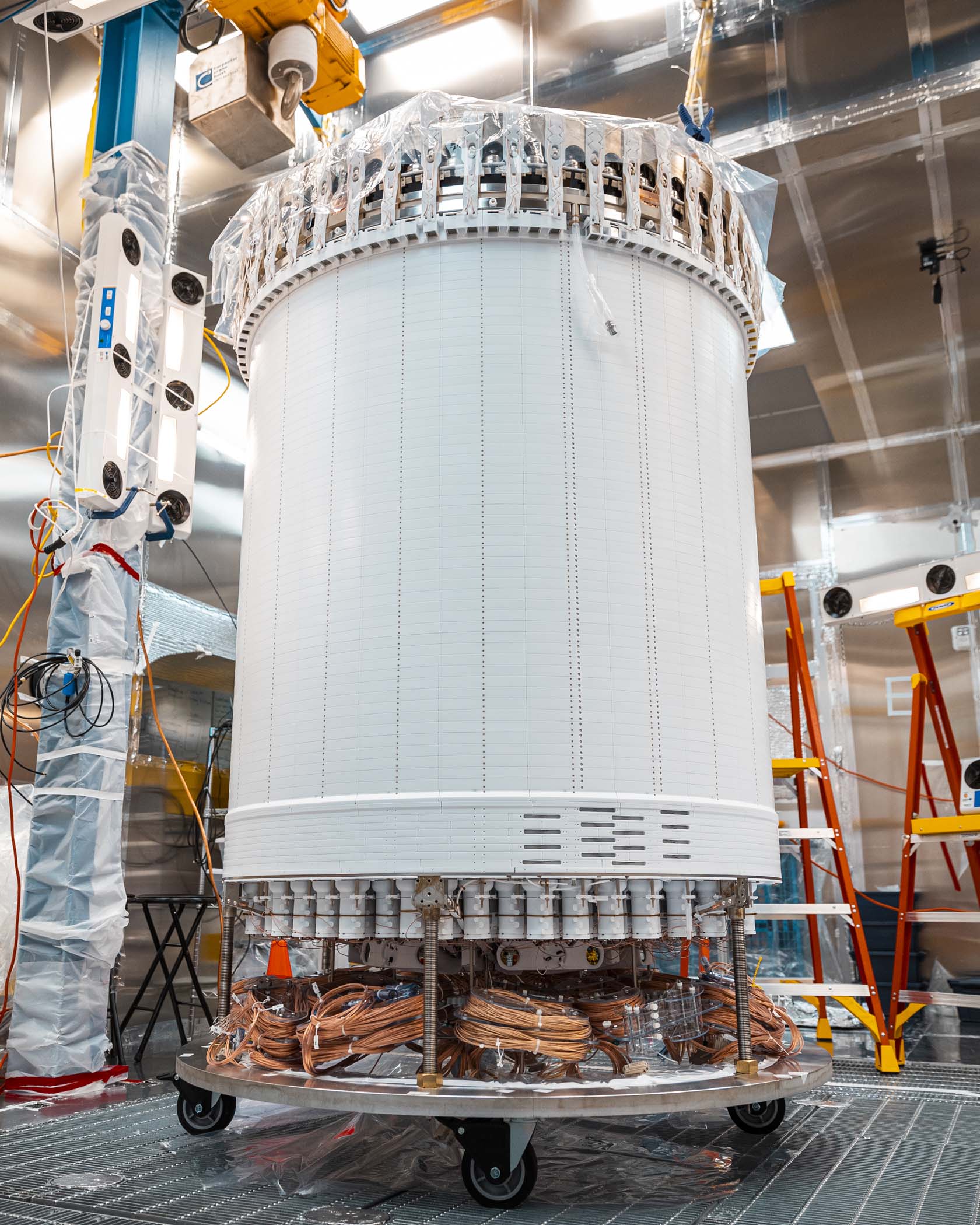 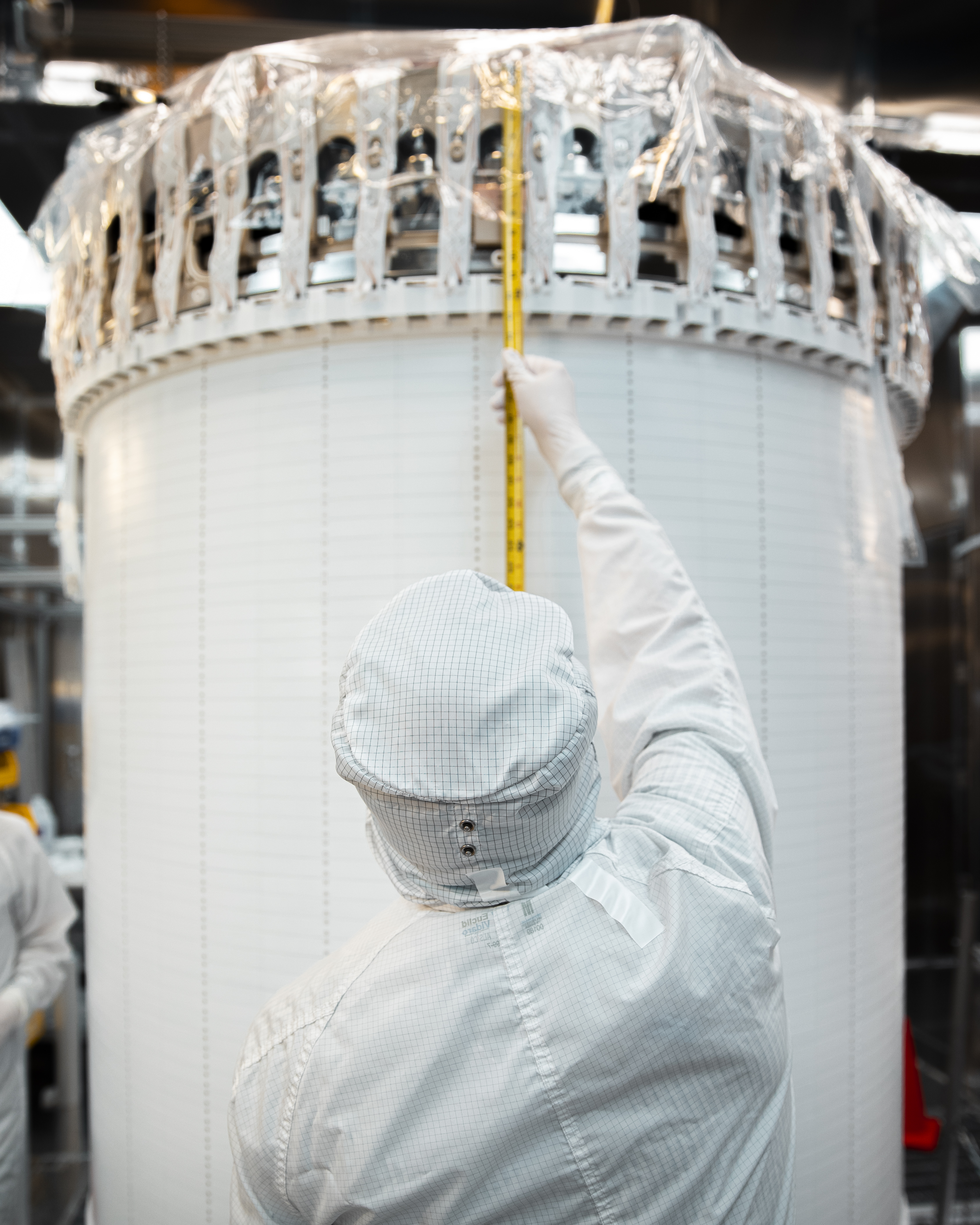 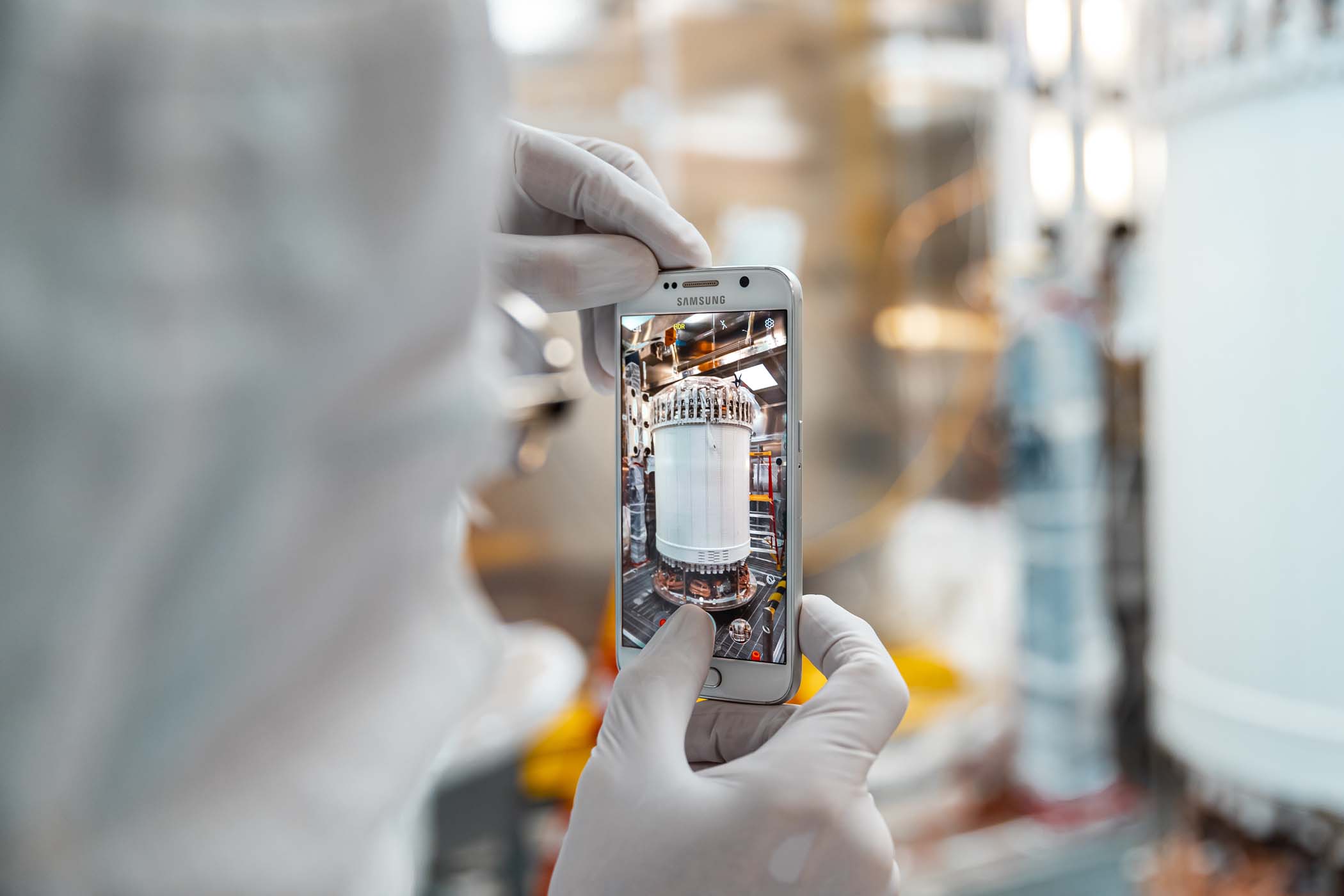 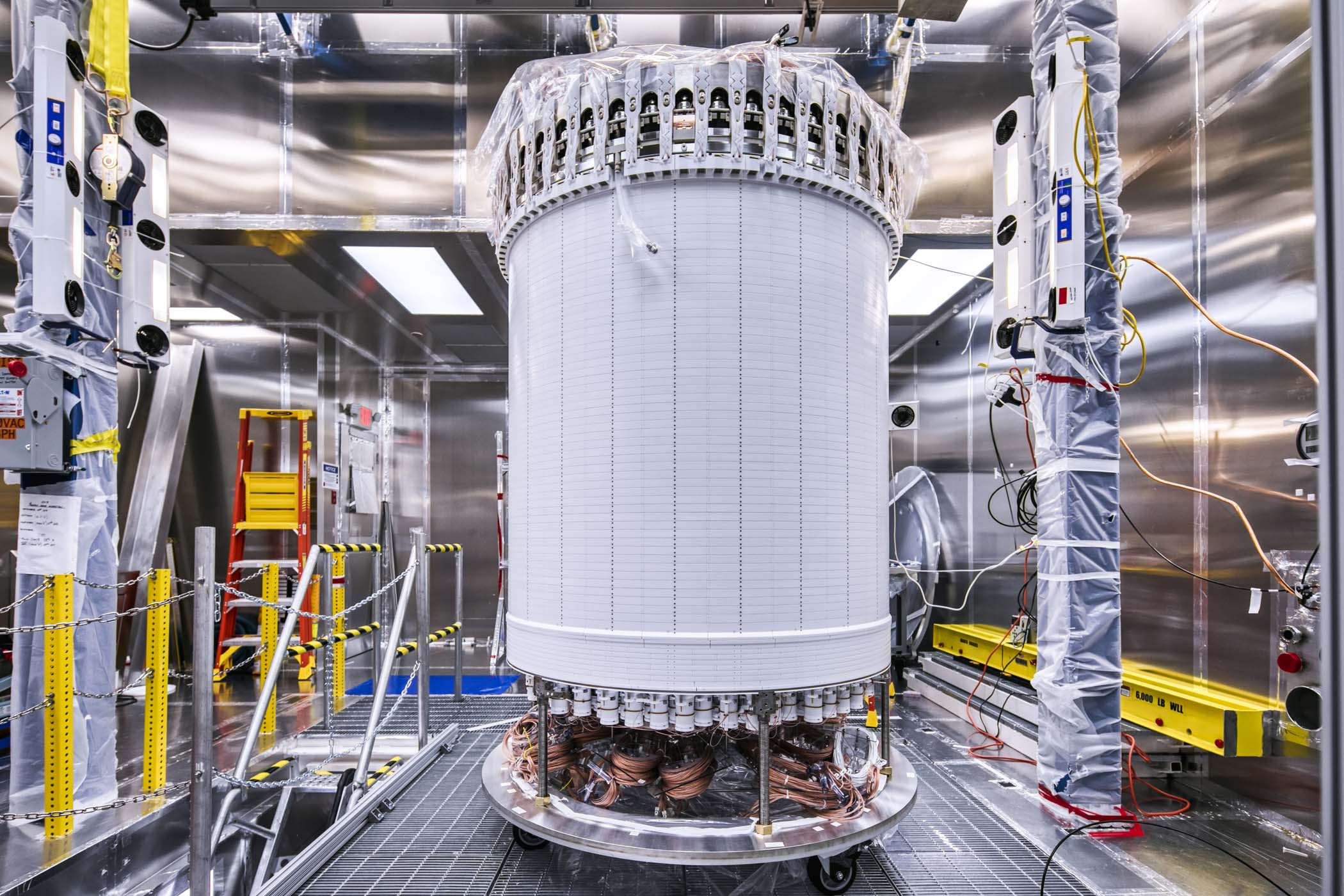 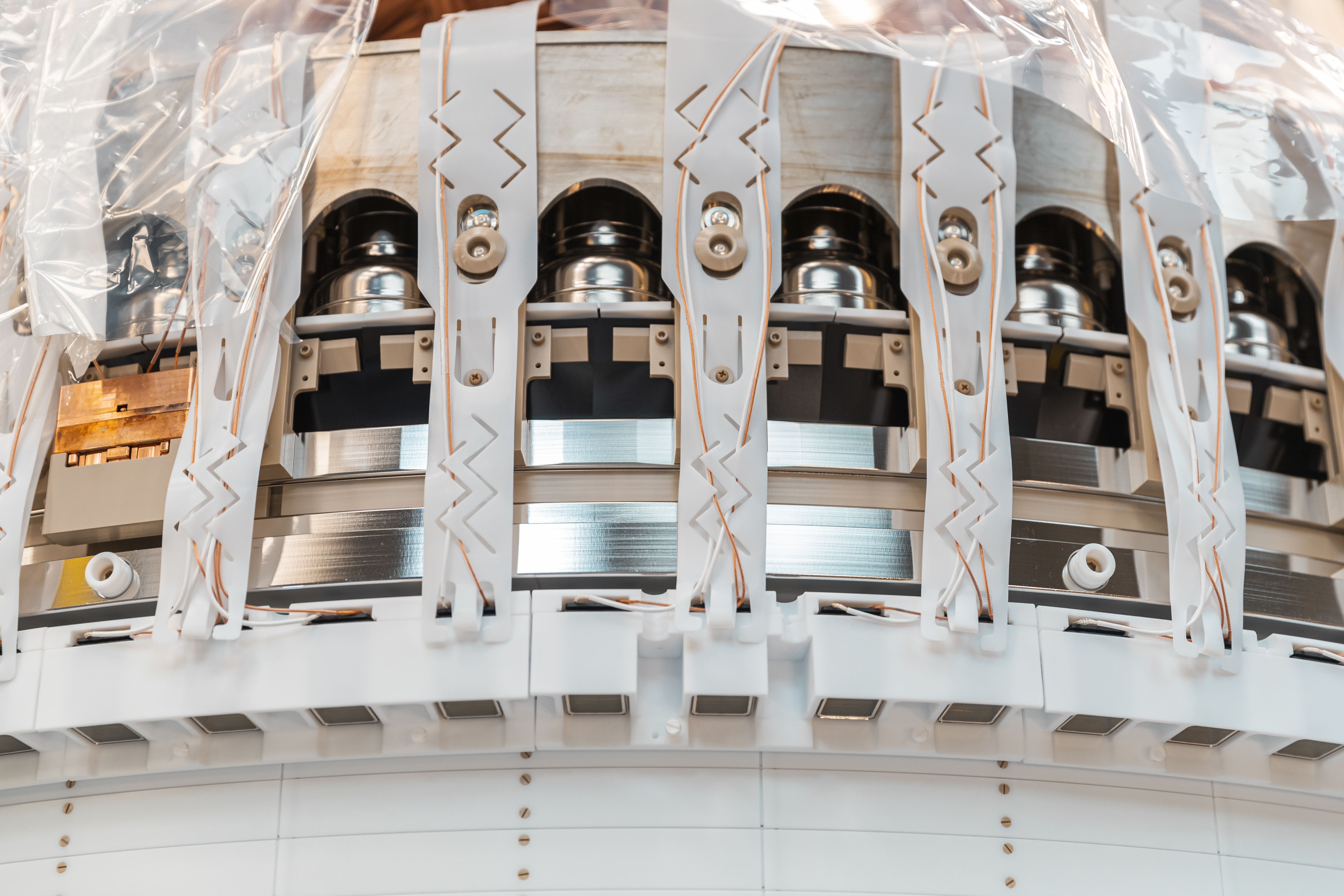 A close-up of the top of the recently assembled LUX-ZEPLIN xenon detector in the Surface Assembly Lab cleanroom at Sanford Underground Research Facility on July 26, 2019. White PTFE reflective paneling lines much of the detector. From the outside, a viewer can see the stainless-steel outer rings of the electric grids, the back of the PMT array and some of the PMT cabling. Photo by Nick Hubbard, Sanford Underground Research Facility. 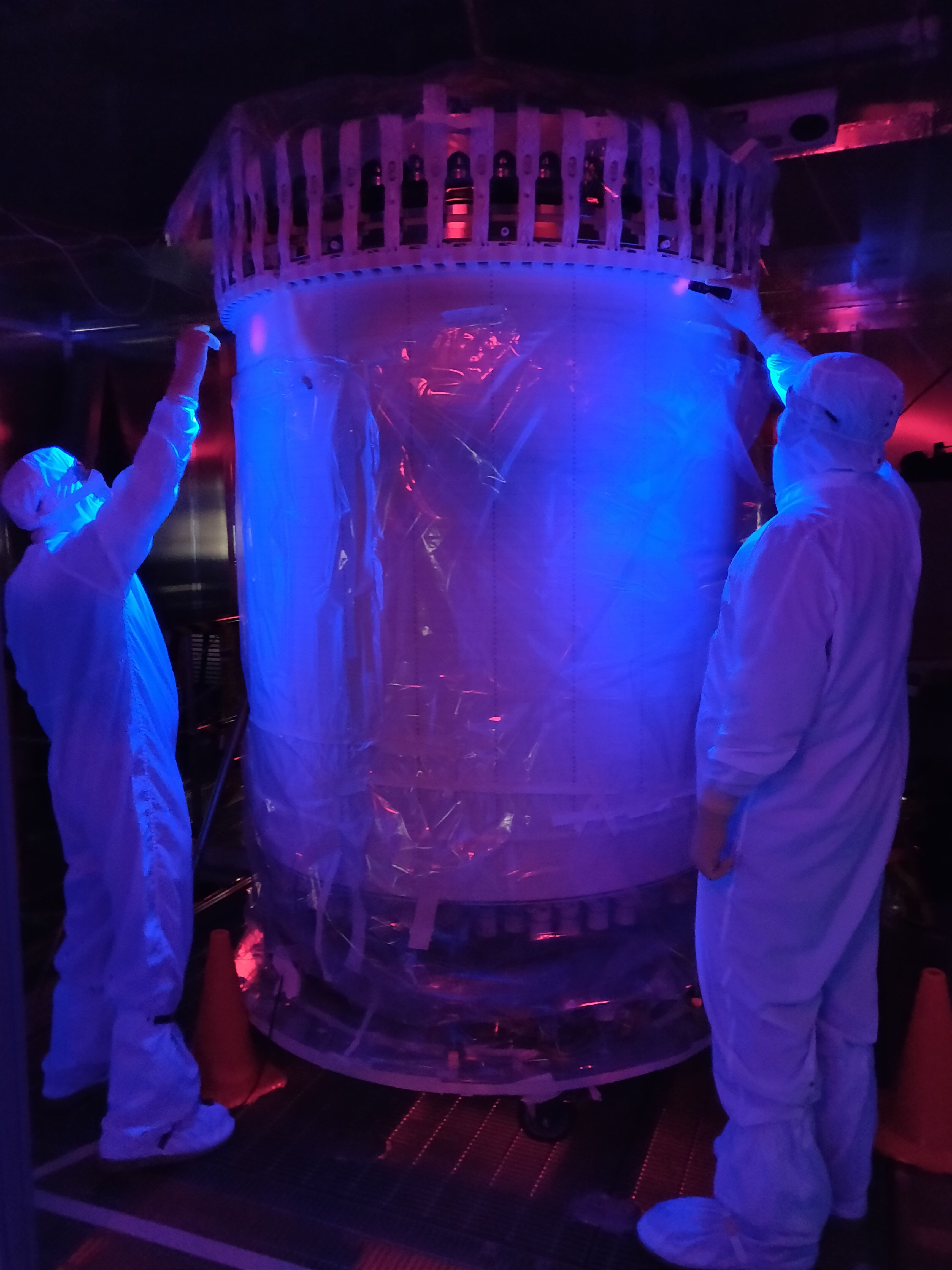 Under ultraviolet light, research check for dust on the detector. Photo By: Nicolas Angelides, LZ Collaboration. 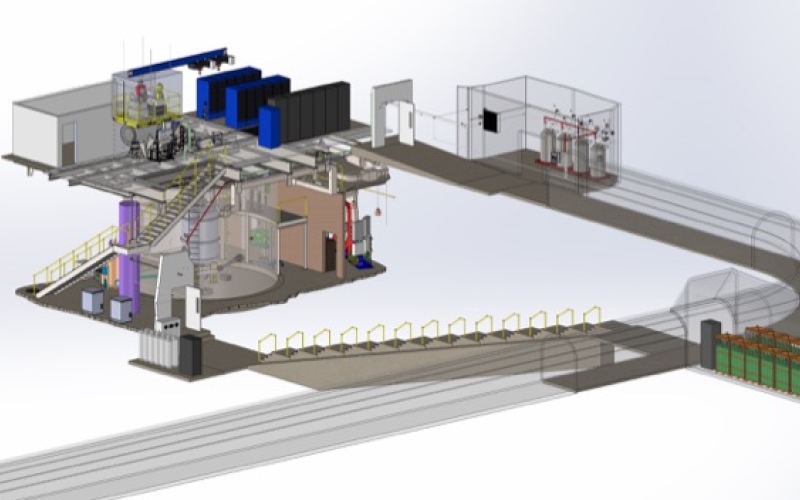