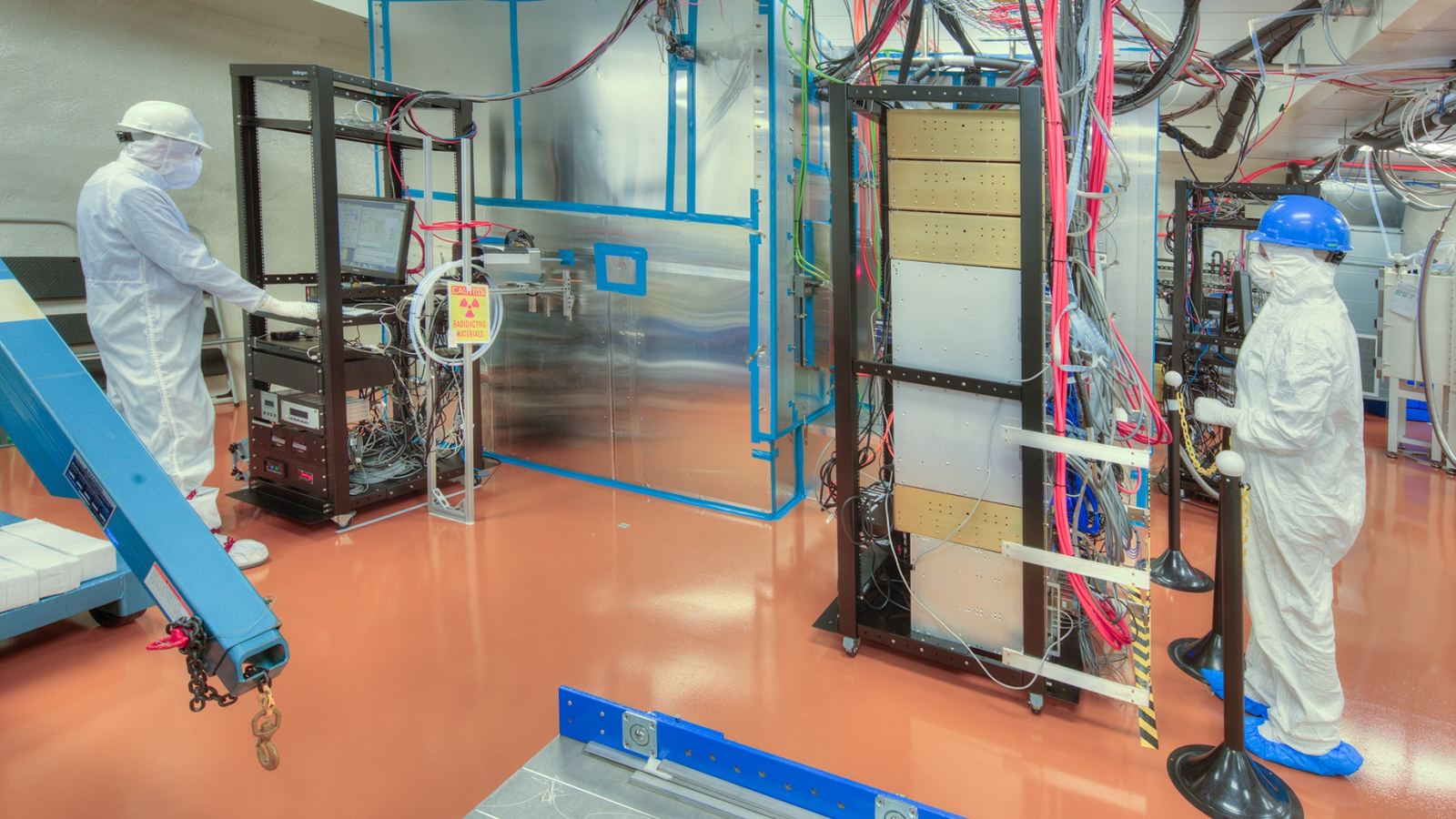 John Wilkerson (left) and Cabot-Ann Christofferson work on the systems for the Majorana experiment, which sits inside a six-layered shield to block backgrounds.

For years, the Majorana Demonstrator laboratories and machine shop bustled with activity. Dozens of collaboration members worked on various elements of the experiment— from electroforming copper to building a shield to machining every component for the detectors and cryostats. Today, nestled deep within its six-layered shield, Majorana quietly collects data with just a handful of team members to ensure things are working.

“We’ve made the transition from managing construction to overseeing an operation,” said Vince Guiseppe, assistant professor of physics at the University of South Carolina. “Since the winter, we’ve been running smoothly.”

The Majorana Demonstrator uses natural and enriched germanium crystals to look for neutrinoless double-beta decay. Such a discovery could determine whether the neutrino is its own antiparticle.

But the project is, first and foremost, a demonstrator, a research and development project built on a small scale to determine whether a 1-ton version is feasible, said Steve Elliott of Los Alamos National Laboratory. “For it to be feasible, we have to show that backgrounds can be low enough to justify building such a next-generation experiment.”

Which Majorana has done, Guiseppe said. “We’ve only been running for about a year and we appear to be meeting those goals. Our backgrounds are excellent.”

Guiseppe recently became a co-spokesperson for the project, along with Jason Detwiler of the University of Washington. The two replace Elliott, who will become co-spokesperson for LEGEND, the recently formed collaboration that will develop a much larger next-generation neutrinoless double-beta decay experiment

The Large Enriched Germanium Experiment for Neutrinoless ββ Decay, or LEGEND, collaboration was formed a year ago and includes members of the Majorana Demonstrator collaboration, the GERDA (GERmanium Detector Array) collaboration, and other researchers in this field.

GERDA and Majorana are searching for the same thing, but they’ve used different technologies to reach their goals. For example, where Majorana used electroformed copper and built a complicated six-layered shield to keep backgrounds out, GERDA used commercial copper and shielded its detector inside a tank of liquid argon, which scintillates, or lights up, when backgrounds enter.

The LEGEND collaboration wants to scale up to 1,000 kg of enriched germanium. By comparison, Majorana and GERDA each use approximately 30 kg in their experiments. But the plan is to start smaller, with a 200-kg experiment.

“LEGEND 200 will be the first incarnation and will be the roadmap to get to the ton-scale experiment,” Guiseppe said.

“The good news is we have a great collaboration with great people. We have a common vision and design and funding plans are moving forward. This is not something one of us can do alone. It’s important to have international partners.”

Although he’s looking to the future, Guiseppe remains focused on the here and now. “Both GERDA and Majorana have to complete their life cycles,” he said. “And there’s still a lot we can learn from running our current experiments.”