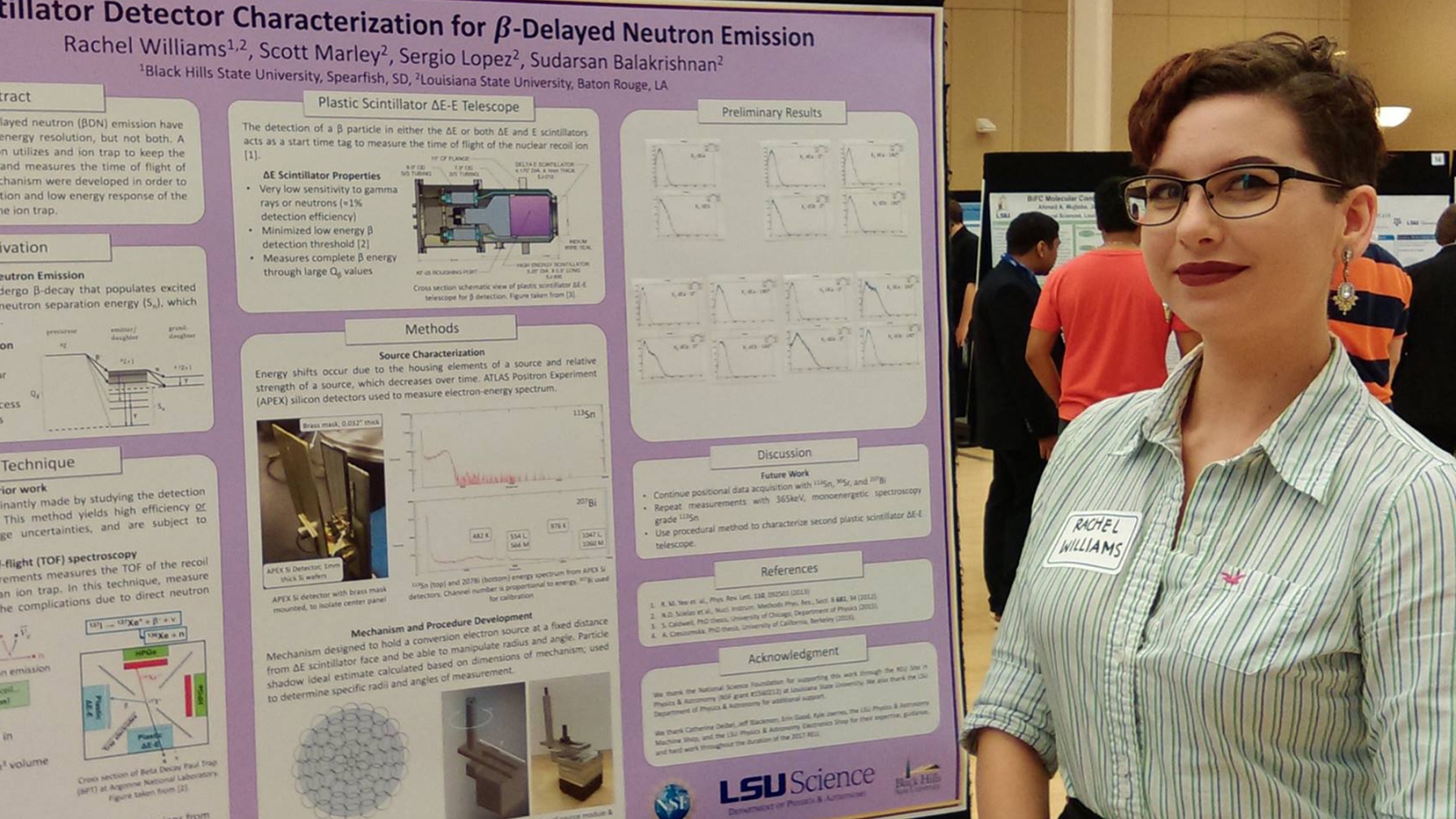 Rachel Williams, a senior at BHSU, participated in an NSF program that allowed her to do research at Louisiana State University.

Editor's note: The original article can be found on the Black Hills State University website. It was updated by Constance Walter for this version.

In the summer of 2016, Black Hills State University student Rachel Williams built a cosmic ray detector in Italy. This summer, Williams, a physical science and chemistry major, stayed stateside where she dove deeper into nuclear physics through a partnership with Louisiana State University.

“This program allowed me to extensively delve into applied nuclear physics,” said Rachel. “This has been one of the most fruitful summer programs that I have been a part of in my career.”

Williams was inspired to study physics while a senior at Spearfish High School “with great guidance from my physics teacher, Steve Gabriel,” she said. “Through his encouragement and through the QuarkNet program at BHSU, I had the opportunity to start working with Dr. Brianna Mount and Dr. Kara Keeter.” Mount and Keeter are physics faculty at BHSU.

“Sanford Lab has been a very positive experience in my career as it is a location for amazing research with global contributors,” Williams said. “Everyone I have met and worked with in my time at Sanford Lab has been very welcoming and eager to share their research.”

As a freshman, she was accepted into the Davis-Bahcall Scholars Program, a Sanford Lab initiative that gives students the opportunity to explore the world of modern scientific research at world-leading laboratories and universities.

“The Davis-Bahcall Scholars program was a stepping-stone along my career. It offered a unique opportunity to see cutting-edge physics across the world on a very up-close and personal level,” Williams said.

While at LSU, Williams worked with Dr. Scott Marley, assistant professor, and graduate students Sudarsan Balakrishnan and Sergio Lopez to characterize a detector used in beta-delayed neutron emission. The overall goal of the research is to better design safety standards for nuclear power plants as well as to understand r-process heavy element Nucleosynthesis, a set of reactions in nuclear astrophysics that create roughly half the atomic nuclei heavier than iron.

“Specifically, I designed the mechanism that is used to hold the radioactive source over the scintillator detector and rotate to characterize all areas of the detector,” Williams said.

As Williams prepared to finish her research experience and return to BHSU for the fall semester, she began to collect the initial data of the scintillator response using the mechanism she had designed.

She credits her LSU mentor Dr. Marley and the two graduate students she worked with for being “invaluable in her career,” and said she looks forward to their continued guidance as she completes her degree at BHSU.

But as much as she loves physics, this semester will see Williams's research interests change a bit. A psychology minor, Williams plans to work with Dr. Eric Clapham, associate professor of psychology.

"After I graduate from BHSU, I will be pursuing a Ph.D. in Cognitive Neuroscience," Williams said. "I am currently working diligently on applying to several potential graduate schools."

Note: This summer, BHSU also hosted a 10-week REU program similar to the one Rachel attended. The BHSU program centered on underground science at Sanford Lab. Students from across the U.S. were on campus for the program and were paired with BHSU faculty mentors for research.