For more than five years, Ross Shaft crews have been stripping out old steel and lacing, cleaning out decades of debris, adding new ground support and installing new steel to prepare the shaft for its future role in world-leading science. On Oct. 12, all that hard work paid off when the team, which worked its way down from the surface, reached a major milestone: the 4850 Level.

“As we got closer to the station and we could see the lights off the 4850, there was a lot of excitement from the crew,” said Mike Johnson, Ross Shaft foreman. “It was like, ‘Man, we’re finally here.’”

Mike Headley, executive director for the South Dakota Science and Technology Authority, praised the Ross Shaft team. “The Ross Shaft is critical to the future of Sanford Lab and I am incredibly proud of the hard work and dedication shown by this team.”

Refurbishing the shaft is just one step toward a much larger goal, said Chris Mossey, Fermilab’s deputy director for LBNF. “Completion of the Ross Shaft renovation to the 4850 Level is critical to support construction of the Long-Baseline Neutrino Facility. Thanks to the Sanford Lab crews, who have worked since August 2012, to reach this significant milestone.” 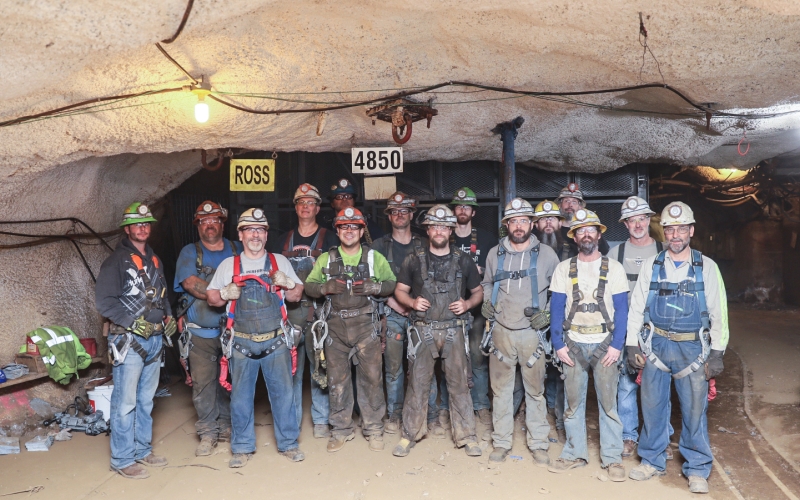 LBNF will house the international Deep Underground Neutrino Experiment (DUNE), which will be built and operated by a collaboration of more than 1,000 scientists and engineers from 31 countries. Fermilab will shoot a beam of neutrinos 800 miles through the earth from Fermilab to massive particle detectors deep underground at Sanford Lab's 4850 Level.

When complete, the Fermilab-hosted LBNF/DUNE project will be the largest experiment ever built in the United States to study the properties of mysterious particles called neutrinos. Unlocking the mysteries of these particles could help explain more about how the universe works and why matter exists at all.

But before scientists begin installing the DUNE detectors, the shaft needs to be completed to the 5000-foot level and a rock conveyor system installed to excavate the caverns that will house DUNE. Still, there's much to celebrate.

“This is a great accomplishment,” Johnson said. “We’ve got a team with different experiences and talents and they really worked together to reach this milestone." But Johnson said credit goes to a lot people who have never set foot in the shaft.

“Engineers, fabricators, vendors, electricians, procurement—everyone played a part in getting us to this point,” he said. “It takes a lot of planning and support. It was a real team effort. 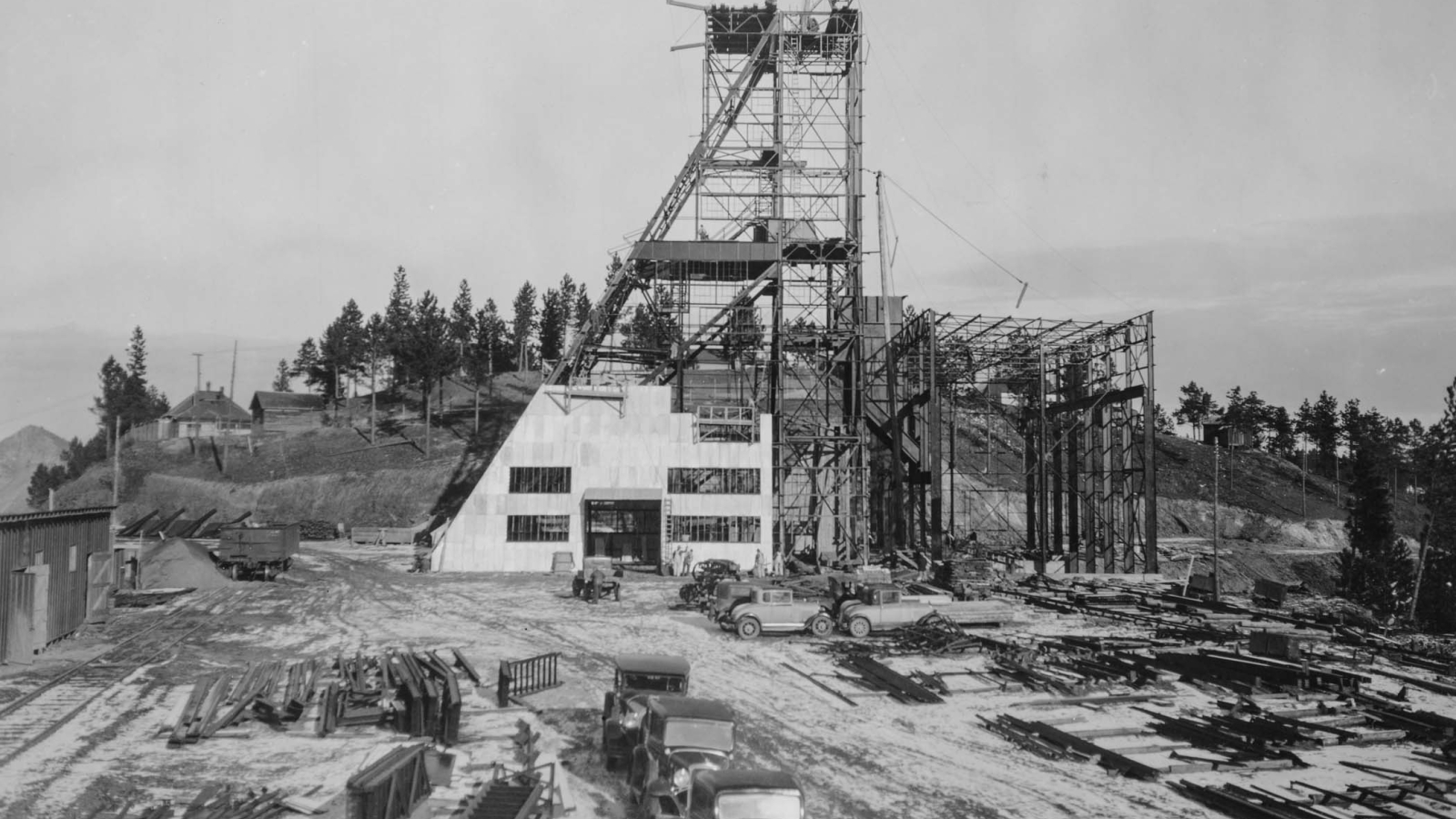 The Ross Shaft was named for Homestake Superintendent Alec J. M. Ross. Construction began in 1932, with the first ore hoisted in 1934. The shaft used conventional sinking methods from 137 feet down to the tramway level. Below the tramway, pilot raises were driven at various depths to complete the shaft down to the 3050 Level. The Ross was deepened to nearly 3,800 feet in 1935 but wouldn't reach the 5000 Level until the end of 1956.

The Ross Shaft was designed to meet production requirements for Homestake, when the Ellison, the main production shaft, began to suffer from subsidence. The new shaft was closer to the south-plunging ore body, providing access to an additional 6.5 million tons of ore in an area known as 9 Ledge. The ore averaged 0.269 ounces of gold per ton. In 1938, the average price for an ounce of gold was $20.67. 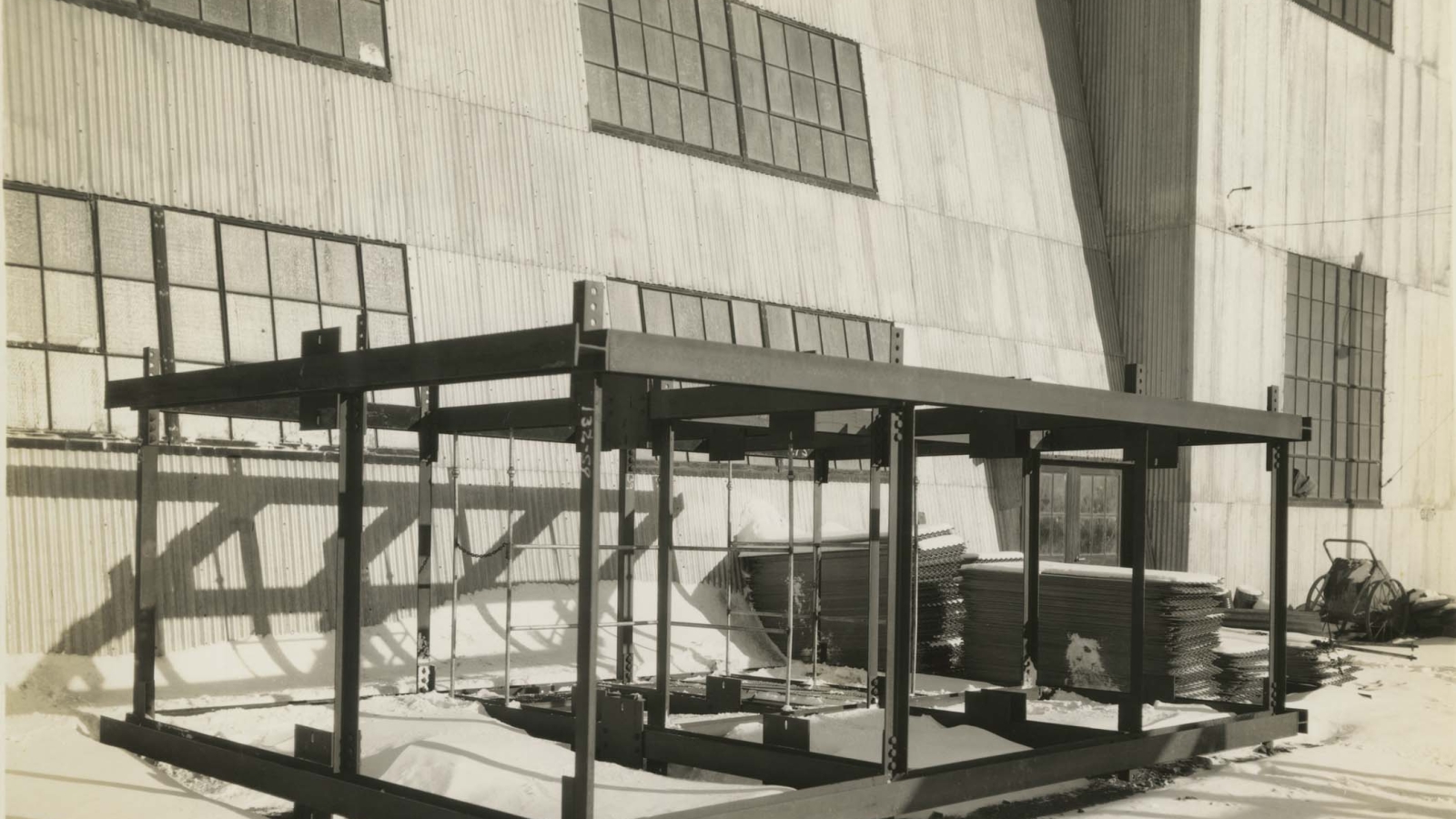 The Ross Shaft is 19 feet 3 inches by 14 feet and is divided into several compartments: two skips, a cage, a counter weight, a cable compartment, a pipe compartment and an access compartment (called a manway during mining days). Two sections of the shaft were lined with concrete for added ground support: the first 308 feet of the shaft and a section between the 2900 and 4100 levels.

For nearly 70 years, the Ross Shaft served as a main conduit for thousands of miners and millions of tons of ore. But debris, water and time took their toll on the structure. When the facility reopened as an underground research laboratory in 2008, the structure needed to be replaced to meet the needs of science 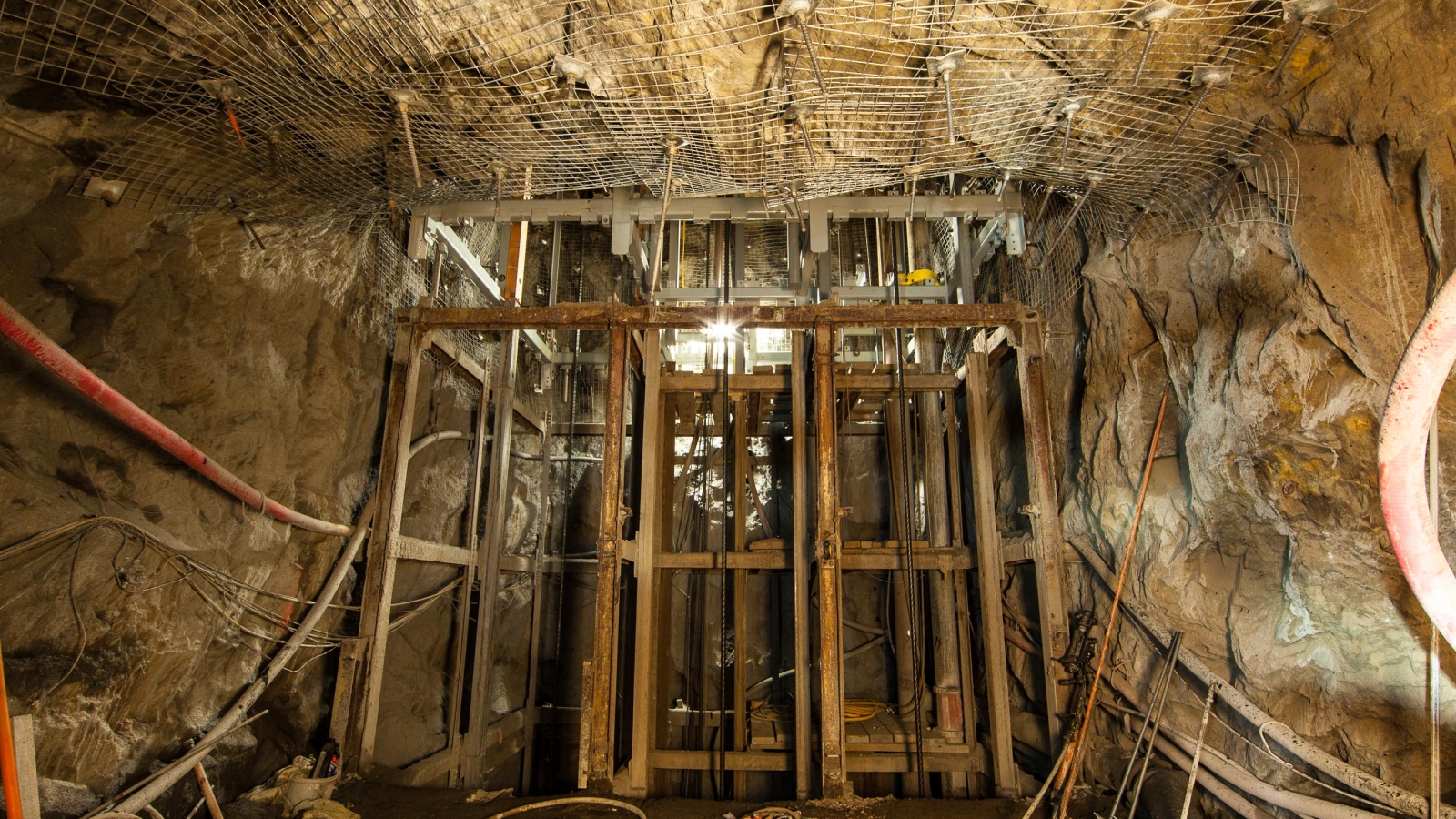 The SDSTA called on G.L. Tiley and Associates to develop a design that could meet the new requirements for world-leading science. De Vries coordinated the design efforts.

“We looked at options that included partial refurbishment. In the end, we concluded that a complete strip and equip was the right approach to take,” De Vries said. That included a more modern design that incorporated the use of hollow structural steel with set intervals of 18 feet.

“Essentially, using these larger sets speeds up the process of steel refurbishment. But it also gives us a much stronger design than the old-style steel sets and improves the structural integrity of the shaft,” De Vries added

Above: Old steel sets at the 300 Level station. Note: near the top of the station, a new steel set is visible. 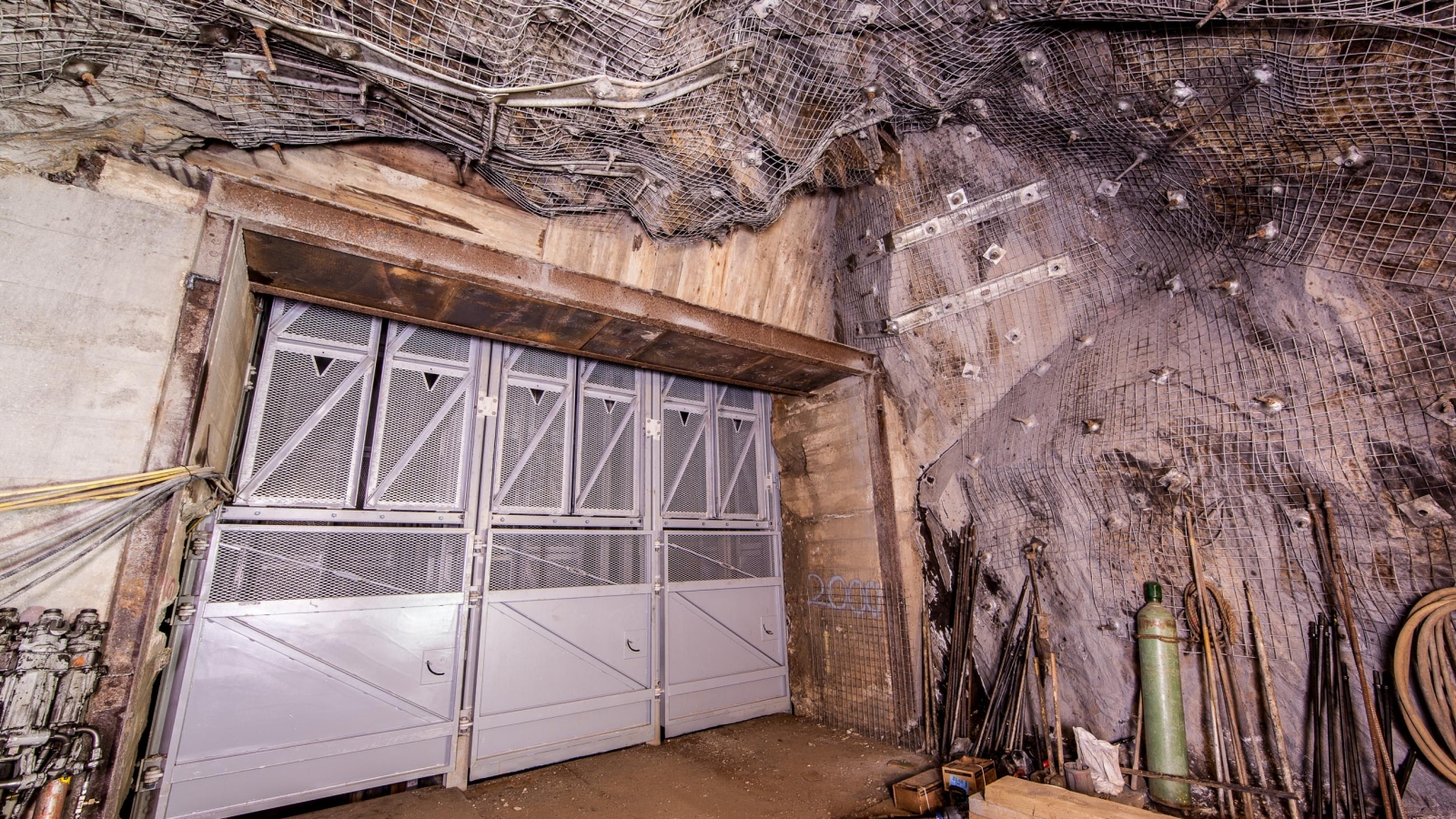 Two parts of the project required specialized structural design after the rehabilitation had begun to accommodate LBNF. Those areas include the brow at the 4850 Level and the spill collection area on the 5000 Level. De Vries worked closely with G.L. Tiley on the new designs—and sought the expertise of the crews on installation plans.

“I’ve always found that when we do that, when we incorporate the expertise the crews have with respect to steel construction, we can work out any challenge and do a much better job.”

And even with the changes in structural design, De Vries said it won’t hold up the project. 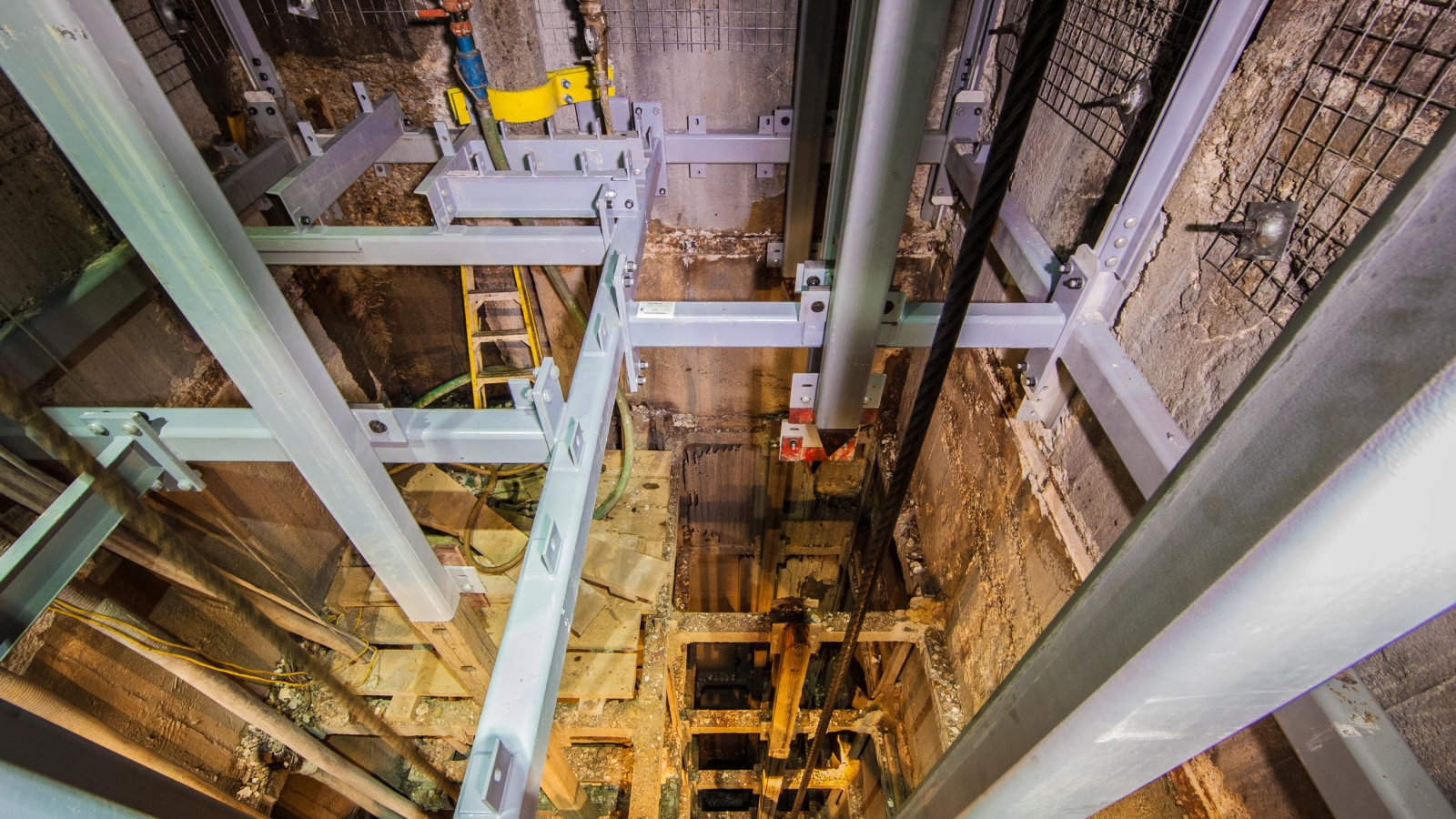 The Ross Shaft is a unique construction project that included a unique set of challenges. Of particular concern? A design that allowed continued access to critical systems like the pumping stations and ventilation, while providing emergency egress.

“From a construction point of view, it would have been easier and faster if we didn’t have to worry about ongoing access,” De Vries said. “We wouldn’t have had to shut down for shaft inspections of the lower sections or pump stations.”

Another challenge was the Ross Pillar, a 1,200-foot concrete zone within the shaft used as additional ground support during mining days. Over the years, normal ground movement caused misalignment from the 2900 Level to the 4100 Level. In some areas, the encroaching concrete bowed the steel, making it difficult to move the cage through the shaft.

“There was a lot of work that went into redoing this section and creating more room for the conveyances,” De Vries said. “In some places, the crews had to chip out the concrete liner with chipping hammers. They did a great job and I’m really proud of the work that was done.”

Above: Looking down the Ross Shaft where a new set meets an old set. 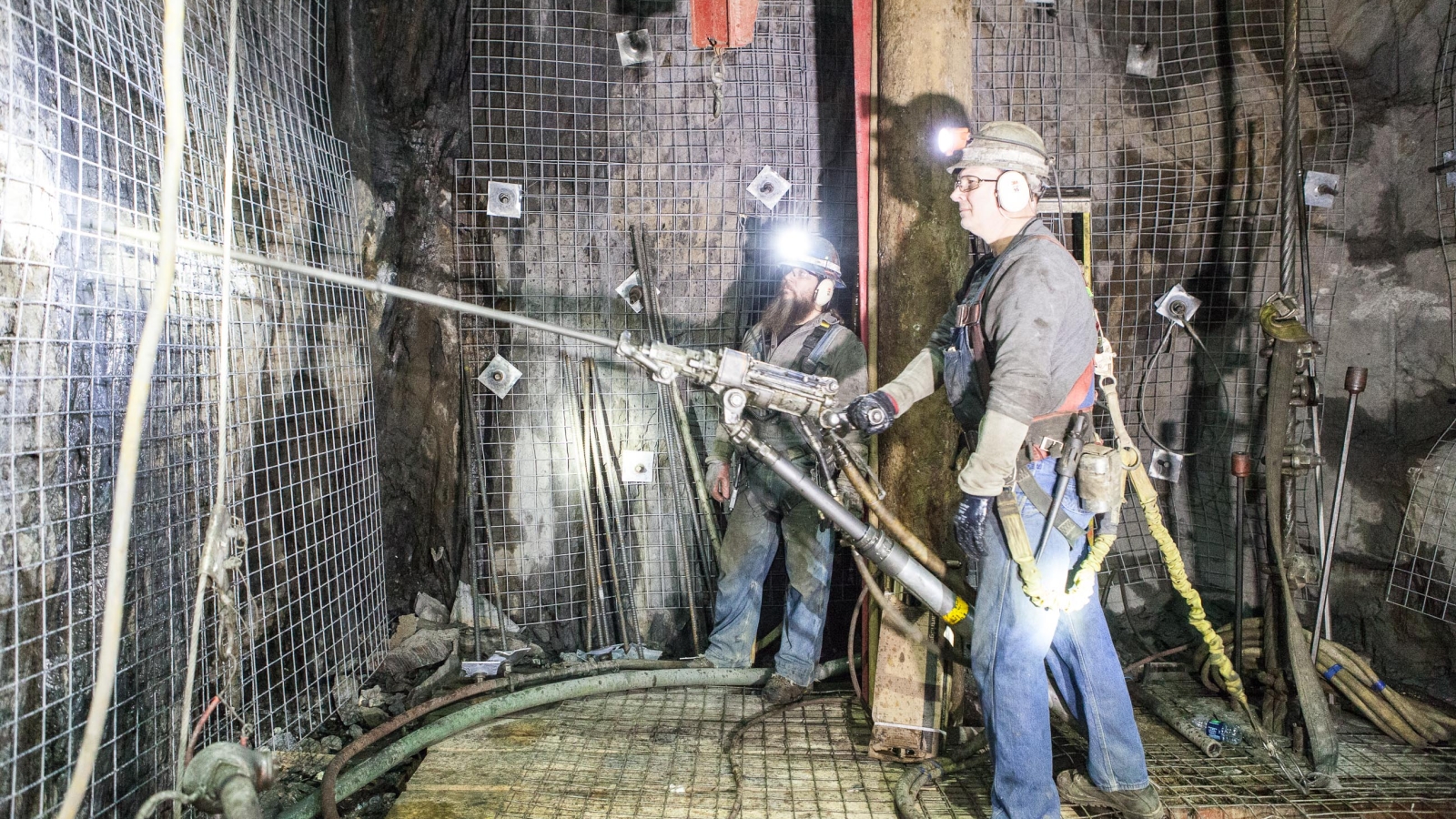 Throughout construction of the Ross Shaft, safety has been of the utmost concern, said Johnson. “This is hard work with a lot of challenges, so safety is a big deal.”

To mitigate risks, the team uses Job Hazard Analyses (JHAs) and follows Standard Operating Procedures (SOPs). The team starts its day with a tool-box talk. They go through the JHAs step by step and make sure they have everything they need to do the job safely.

Recently Johnson incorporated a “mid-shift” safety talk, something he used while working in the oil fields in North Dakota. “Things can change throughout the day, so we talk about the job mid-shift to see if we need to make any adjustments."

“You know, we’ve got our families at home and our family at work. Taking this extra step takes time, but if it keeps people safe, it's worth it,” Johnson said.

Above: Technicians install ground support in the Ross Shaft.

On Aug. 9, 2017 Fermi Research Alliance LLC, which operates Fermilab, awarded Kiewit/Alberici Joint Venture (KAJV) a contract to begin laying the groundwork for the excavation of LBNF, the facility that will support DUNE.

Approximately 875,000 tons of rock will be removed and conveyed to the surface, then moved to the Open Cut using a rock conveyor system. When installation of LBNF and DUNE equipment begins, every component, including the massive steel beams that will be used to build the cryostats, will go down the Ross Shaft.

“It’s kind of like building a ship in a bottle,” said Fermilab’s Chris Mossey. “We’re using a narrow shaft to move all the excavated rock up, and then all the parts and pieces of the very large cryostats and detectors for DUNE down to the 4850 level, about a mile underground.”

Construction on pre-excavation projects, including additional work on the brow at the 4850 Level and the rock conveyor system, is expected to begin in 2018. The main excavation for LBNF/DUNE is planned for 2019 and is expected to take three years.

Installation of the cryogenic infrastructure and the four detector modules for the experiment is expected to take about 10 years and will operate for more than 20 years. The Ross Shaft will play a role throughout, just as it did for many decades when Homestake mined for gold.

“Now it has a new purpose,” said Sanford Lab’s Headley. “It will support world-leading science for decades to come.”

Historical sources for this article include Steve Mitchell's "Nuggets to Neutrinos"

The Ross and Yates shafts are critical to science—today and in the future—at Sanford Lab. 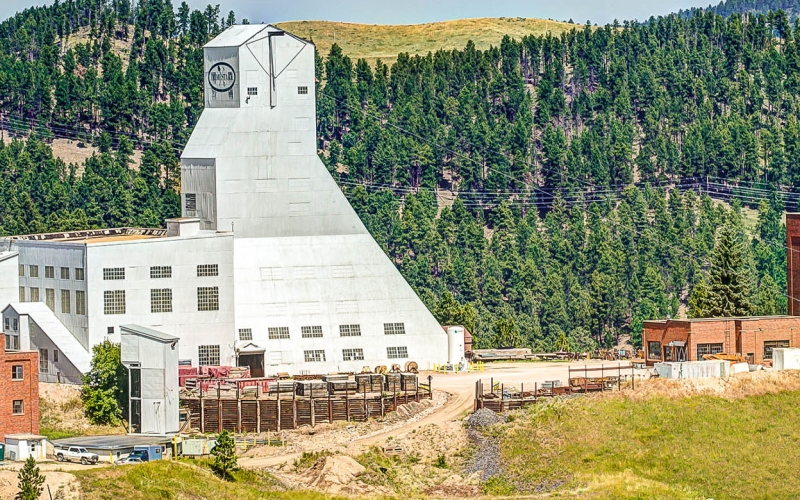 The Yates Shaft is the 5,000-foot life line that provides everything science needs to operate, including supplies, equipment and access to science experiments and underground infrastructure.
Full Details 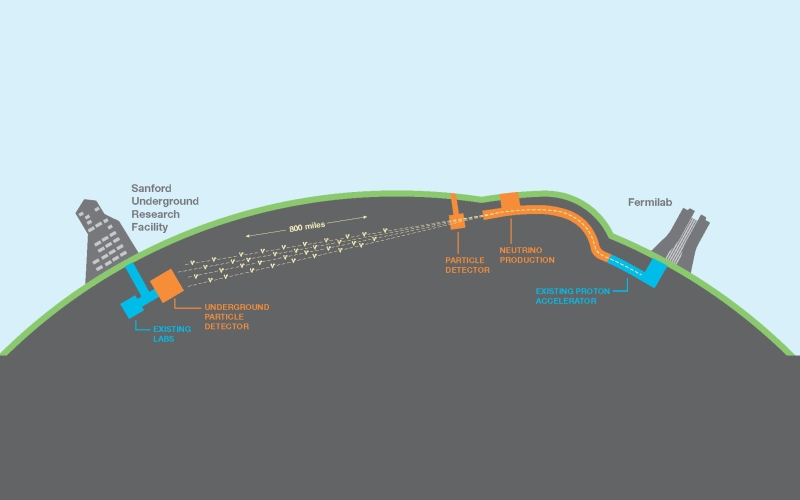