To advance geothermal systems, EGS Collab maps the hidden fractures behind a wall of rock 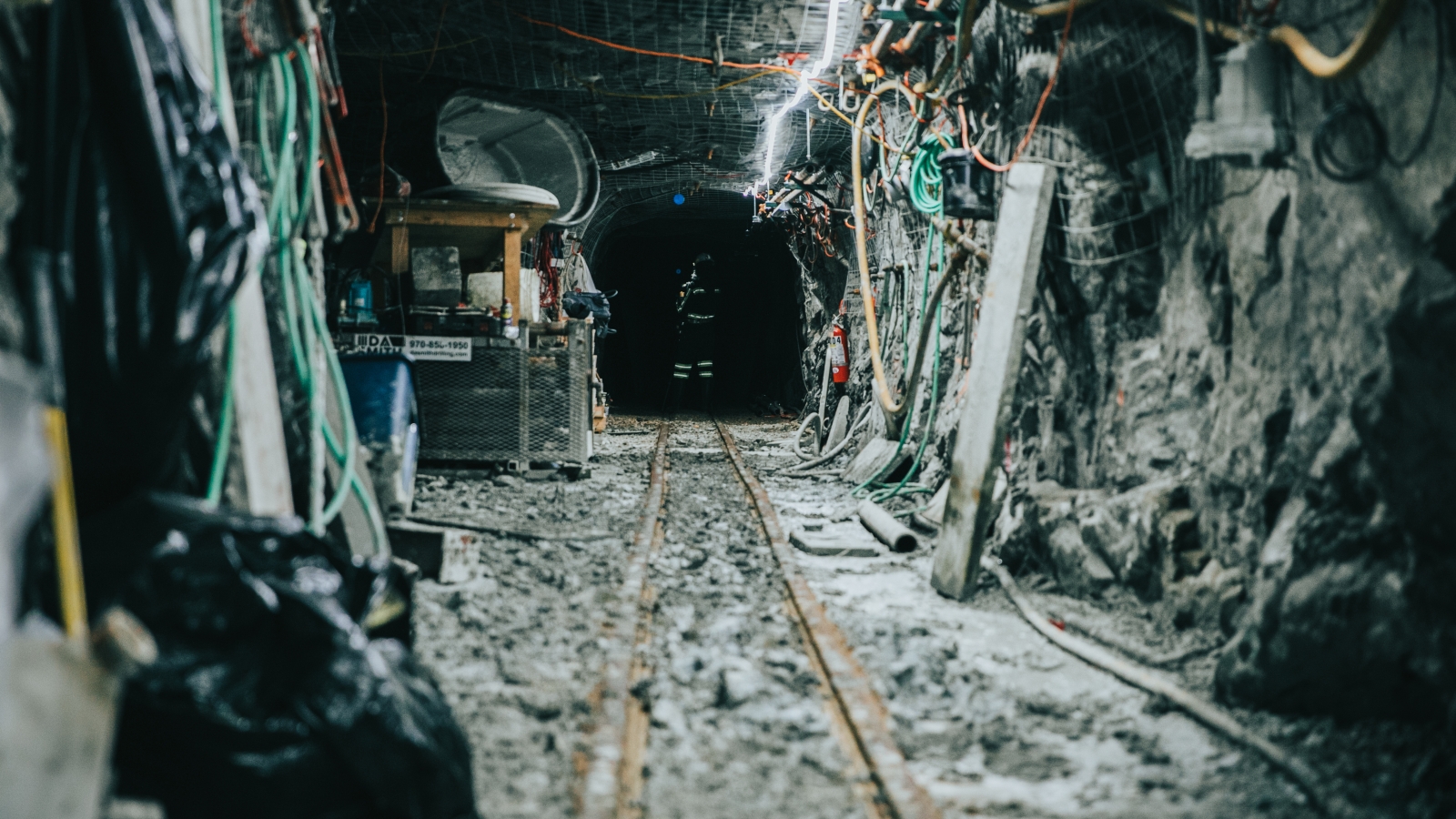 In 2021, the EGS Collab began outfitting a drift on the 4100 Level of Sanford Underground Research Facility for geothermal research.

Picture this: you’re standing in a drift, 4,100 feet below the Black Hills of South Dakota. Wrinkled rock arches over you. At first, the rock appears gray and featureless. But as you peer through the net-like metal mesh of ground support, you notice something interesting: a thick stripe of white quartz then faint, hairlike veins swirling like loose cursive against the dark, amphibolite rock.

The drift you’re imagining is a research testbed on the 4100 Level of Sanford Underground Research Facility (SURF) and home base for the Enhanced Geothermal Systems (EGS) Collab, a research group interested in extracting renewable energy from Earth’s deep, hot rocks.

“Geothermal energy extraction requires three things: hot rock, permeable pathways through the rock and fluid to extract the heat,” said Tim Kneafsey, a staff earth scientist at Lawrence Berkeley National Laboratory (Berkeley Lab) who leads the EGS Collab research group. “Hot rock is an abundant resource in the U.S., but it is often missing open pathways that allow you to extract the heat.”

Because pathways are often the limiting factor in geothermal systems, EGS Collab is investigating ways to maximize the usefulness of natural fractures that exist in rock formations.

While rock on the 4100 Level isn’t hot, it gives the EGS Collab a place to test a method called “hydraulic shearing” to open, or stimulate, a matrix of preexisting natural fractures in their testbed.

“By opening them and causing them to shift slightly, the roughness of the fractures keeps them propped open,” Kneafsey said. “This self-propping allows water to flow through and–in hot rock environments–transfer heat.”

Before natural fractures can be propped open, however, researchers first must locate them.

A library of rock

At their testbed on the 4100 Level of SURF, researchers drilled nine boreholes, which will be used later in the experiment to stimulate and monitor the rock’s response to hydraulic shearing.

The boreholes, which measure four inches in diameter, vary in depth, the shallowest measuring 180 feet and the deepest measuring 265 feet. When the rock, or core, is removed from these boreholes, it is carefully boxed and delivered to SURF’s Core Archive, a library of rock samples collected over several decades from underground.

The Core Archive was originally created by the geologists at Homestake Gold Mine. The core samples allowed them to probe the boundaries of gold, silver and copper ore bodies throughout the mine.

Earth scientists, however, are more interested in fractures than precious metals.

Megan Smith, an Earth scientist at Lawrence Livermore National Laboratory (LLNL), and Bill Roggenthen, a research scientist at South Dakota Mines, laid out the recently drilled core samples, each representing the length of one borehole.

On the surface, Smith and Roggenthen spent two days meticulously inspecting more than 1,000 feet of core, seeking natural fractures in the rock. Optimally, they look for fractures that span the length of the testbed, cutting through several boreholes that could be propped open using the hydraulic shearing technique.

It wasn’t an easy task.

Back underground, other researchers use the now-vacant boreholes to further probe their testbed. Lowering a series of sensors, called wireline geophysical logs, into the borehole, researchers explore the rock formation from the inside-out.

Perhaps the most straightforward of these sensors is called an “optical log,” which takes images from inside the borehole. These high-resolution images offer a 360-degree view of the borehole. The optical log alone, however, yields limited information.

“The rock is nearly black in some areas, and when you have a dark, shadowed fracture in a section of dark rock, all you get is a dark image, which doesn’t tell us much,” said Jeff Burghardt, lead geomechanic at Pacific Northwest National Laboratory (PNNL).

Other wireline logs can complete the picture. The “acoustic log,” for example, uses ultrasonic frequencies to map the borehole.

“We are making a series of snaps—short, sharp sounds—that reflect off of different materials in the borehole,” said Paul Schwering, senior geoscientist at Sandia National Laboratories. “If the snap hits solid rock, it will reflect really fast. But it it’s softer rock or if it’s been gouged out, then that response slows down.”

The list of wireline logs continues—and gets increasingly complex. The logs take measurements of geomechanical properties; monitor fluid and temperature conductivity; and even test electrical conductivity that yield insights into permeability, porosity and water quality. Using these tests, the researchers can infer information about the routes water takes as it flows through the rock.

After examining both the core and the void it left behind, researchers combine the information to get a more complete picture of their testbed.

“If we see something promising when we evaluate the core, we can correlate it to the wireline logs that were performed after the cores were drilled,” Smith said. If they see a correlation, they can be relatively certain of a fracture in that location.

If a specific section of core is promising, they use photography of the core to render a 3D model of that section.

“With the 3D model, we can rotate the core, move it around and even orient it back into the borehole, the way it was originally oriented, and measure directions and angles from that core very easily,” said Roggenthen.

Having mapped the invisible landscape behind a wall of rock, what have researchers learned?

“These wells are what we would call very ‘tight,’ meaning they hold the water very well. The hydraulic permeability—how well water can flow through rock—is very, very low in most of these wells,” Burghardt said. “The challenge before us is to enhance the permeability of this testbed.”

To test hydraulic shearing techniques, the EGS Collab will need to zero in on the few fractures that were located.

The boreholes will be outfitted with equipment that stimulates the rock with pressurized water, opening and propping the fractures, in an attempt to create an interconnected network. All the while, researchers will closely monitor changes in the rock and water flow between boreholes.

The information EGS Collab gathers will has real-world applications beyond the 4100 Level.

Every byte of data will inform expansive field experiments, like the Department of Energy’s FORGE laboratory in Milford, Utah. This field laboratory hopes to develop techniques that will enable powering 100 million American homes through geothermal energy.

“Getting EGS [Enhanced Geothermal Systems] demonstrations all the way through to commercialization and understanding how geothermal energy can be used to produce electricity—that’s the bottom line,” said Hunter Knox, a geophysicist at PNNL.

By mapping, stimulating and monitoring the subsurface at SURF, the EGS Collab is contributing to the nationwide goal of extracting clean, renewable energy from the ground beneath our feet.

This EGS Collab Project is supported by the U.S. Department of Energy, Geothermal Technologies Office; part of the Office of Energy Efficiency and Renewable Energy (EERE).