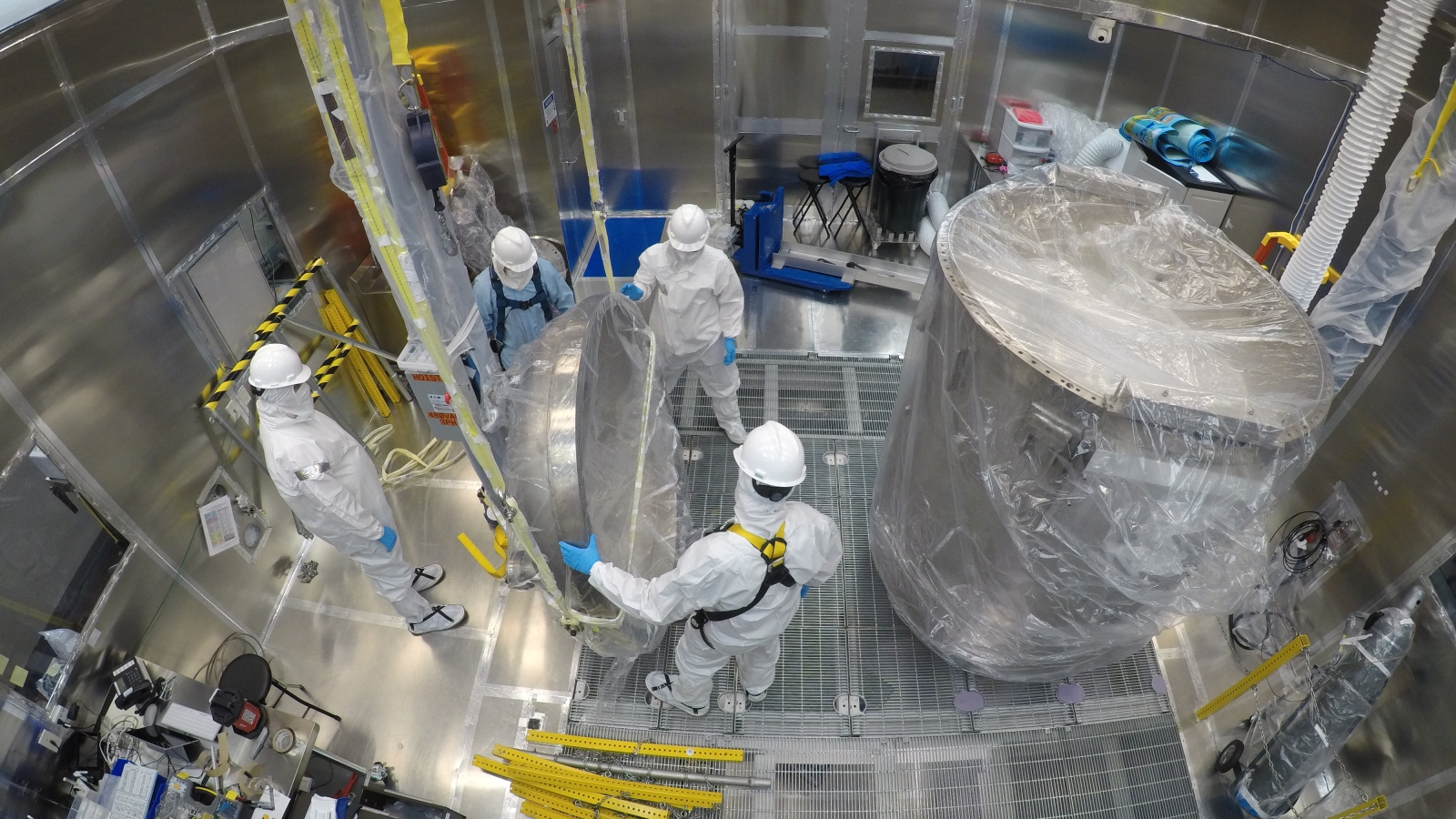 Engineers clean the LUX-ZEPLIN cryostat inside the Surface Lab's Class 1000 clean room in preparation for the next generation search for dark matter.

“In an abandoned gold mine, beneath the Black Hills of Lead, South Dakota…”

This line, or some version of it, has been the lead for countless stories centering on the Sanford Underground Research Facility (Sanford Lab). It’s a tantalizing hook—a vision of sagging rafters and drifts lined with jagged, untouched dikes of gold. Audiences love it, reading on if only to discover what could be happening in this deep, forgotten space.

When encountering the rich history of this area—a thriving gold mine, delving 8,000 feet below a modest mining town with houses crouched on steep hillsides—it’s tempting for writers to create a ghost town of Lead and a decrepit caricature of the Homestake Gold Mine.

There’s just one problem, though—this facility is anything but abandoned.

Shortly after the sprawling Homestake Gold Mine closed in 2002, an uncertain future and expensive maintenance costs forced Barrick Gold Corporation, which owned the mine, to switch off the dewatering pumps. Silencing these motors allowed water to begin rising unhindered. It spilled across the floor of the 8000 Level, inching its way up the shafts and filling one level after another. The steady rise of the water submerged rail tracks, tools, utility lines and even the underground hoistrooms—the mine truly did seem abandoned.

On the surface, however, discussions about the mine’s future had only begun. The National Science Foundation had taken notice of Homestake Mine, eyeing it as a possible future sight for the United States’ pioneering Deep Underground Science and Engineering Laboratory (DUSEL). Although the wheels of politics and financial support turned slowly, the efforts to turn the Homestake Mine into a science facility became a reality. With a generous donation from the facility’s namesake T. Denny Sanford, a land donation from Barrick Gold Corporation and the formation of South Dakota Science and Technology Authority (SDSTA), the Sanford Underground Research Facility was born.

Return to the drifts

“It was amazing to see new life breathed back into the facility,” said Eileen Brosnahan, who worked at Homestake for 29 years, before returning as one of the first Sanford Lab hires. “The shift from a world-renowned gold mine to a world-renowned science facility was incredible.”

It was a messy job, mucking out the 4850 Level, but you’d be hard-pressed to find traces of mine dust in the Davis Campus today—especially in the class-1000 cleanroom that houses the MAJORANA Demonstrator. Shotcreted walls, gleaming floors and espresso machine would make it possible for researchers to forget they aren’t in an ordinary office space—if only there were windows.

Battery-powered locomotives rumble through the East Drift, making the daily commute to the Ross Campus a bit shorter as it motors infrastructure technicians and researchers between the two campuses.

Far from decrepit, the facility is carefully maintained so scientists can conduct research safely. The Underground Maintenance Crew maintains more than 12 miles of underground space for science by bolting rock, maintaining ventilation paths and assessing infrastructure. A massive project—the rehabilitation of the Ross Shaft—reached a milestone when the work reached the 4850 Level in 2017. Crews stripped out old steel and lacing, cleaned out decades of debris, added new ground support and installed new steel to prepare the shaft for its future role in world-leading science.

“Laboratory space shielded by a mile of rock is hot property,” said Simon Fiorucci, a researcher with the Lawrence Berkeley National Lab (Berkeley Lab). “There are only a handful of locations in the world that can offer it, and the science experiments in need of protection from cosmic rays keep getting bigger.”

But that’s just half the battle. It’s really all the work that goes into making it a functional science facility that matters: access, utilities, cleanliness and, most importantly, a team with the success of the science at the top of their priorities.

“There is simply no other place like Sanford Lab,” Fiorucci added.

Science resumed on the 4850 Level for the first time in decades with the MAJORANA Demonstrator Project. In 2011, researchers began electroforming the world’s purest copper in a temporary cleanroom in the Ross Campus. The Majorana experiment uses pure germanium crystals enclosed in deep-freeze cryostat modules, protected by copper and lead shielding to answer one of the most challenging and important questions in physics: are neutrinos their own antiparticles? And if they are, what role do they play in the formation of the universe? In the existence of humans?

“Being able to do chemistry like electroforming so far underground is a huge advantage for both the MAJORANA Demonstrator project and future physics experiments that need to avoid cosmic radiation,” said Cabot-Ann Christofferson, a researcher with the Majorana experiment and a chemistry instructor at SD Mines.

While the 10 operating baths plated the world’s purest copper for the Majorana collaboration, the Large Underground Xenon experiment (LUX) began moving into the Davis Campus just one kilometer away.

Just three months after it began scouring the universe for Weakly Interacting Massive Particles (WIMPs), LUX was declared the world’s most sensitive dark matter detector in October 2013. As Sanford Lab began to realize its potential, its reputation grew.

“The campus at Sanford Lab is an ideal location,” said Kevin Lesko, senior scientist at Berkley Lab who manages the low background counting facility on the 4850 Level. “Not only does its depth create a shield for detectors, but it’s in the thick of major physics experiments—it’s where the action is.”

As leading projects seek space within these coveted walls, hundreds of researchers come from institutions across the globe, sprinkling the drifts with distinct accents and cultures, all united by a desire for shared discovery.

The facility has become a vibrant space for research—and a touchstone for STEM and higher education outreach. Excited K-12 students try their hands with design challenges; wide-eyed undergraduate students collect biology samples, switch physics samples in low background counters or guide programmed robots through an obstacle course for the annual Robotics Competition; and doctoral students test, assemble, monitor, adjust and patiently wait for the universe’s most rare events to occur and signatures to appear—all the while planning for the next generation of their research.

The research has not stalled with Majorana and LUX. The scientific strides taken by Majorana helped demonstrate the usefulness of a larger, next-generation experiment, LEGEND 200. LUX-XEPLIN (LZ), the next generation of LUX, is being installed in the Davis Campus—just down the drift from Majorana.

“LUX was really fortunate to help start up SURF a decade ago,” said Fiorucci, a researcher with LZ. “LZ is building upon that success by re-using the LUX space to deliver the next generation of world-leading dark matter detection.”

And then there’s the Deep Underground Neutrino Experiment (DUNE). Powered by the Long-Baseline Neutrino Facility (LBNF), this massive experiment is expected to draw in even more revenue and jobs—and, of course, science. The experiment is hosted by Fermi National Accelerator Laboratory and includes significant contributions from CERN and several countries. According to a report completed by Anderson Economic Group, LLC, for Fermilab, this project is anticipated to flush $950 million into South Dakota’s economy, generate $340 million in income for South Dakota households, and create almost 2,000 jobs in the region at the peak of construction. DUNE also happens to be the largest underground neutrino experiment in the world.

The true testament to the vibrant life at Sanford Lab is the people who work in the drifts, offices and science laboratories every day.

“Sanford Lab has more than 120 staff members and 50 percent of them were Homestake Mining Company employees. They have decades of experience operating the Sanford Lab infrastructure,” said Mike Headley, executive director of SDSTA. “Sanford Lab staff, along with hundreds of researchers from around the world, are moving the laboratory forward to host even more world-leading experiments.”

Strikingly different—and incredibly necessary—tracks of life intersect at Sanford Lab. Riding the 7:30 a.m. cage, you might rub shoulders with a dedicated infrastructure technician who grew up in Central City and has been a part of this underground network’s legacy for fifty years. On your left, you could meet a visiting researcher from Scotland, here to inspect data from his astrophysics experiment at CASPAR. Listening close, you’ll hear voices discuss the day’s work in one breath and their daughter’s soccer tournament in the next.

On the surface, then again on the 4850 Level, workers gather to review the day’s safety and procedure overviews. You can hear their chatter, and often laughter, echo down the drift. Later, an espresso steams in a researcher’s mug in the Davis Campus while he checks his email for updates from the surface. Other workers motor slowly to the Ross Campus, passing an unassuming sign on the side of the drift that reads: Future Sight of LBNF/DUNE, reminding them that even more neighbors are about to move in.

“While the facility was once an active mine with a deep legacy, it’s now a laboratory making its own rich history in science,” said Headley.

Sanford Lab is a place where life is lived in the extremes, a place of vibrant growth—a place that is anything but abandoned.