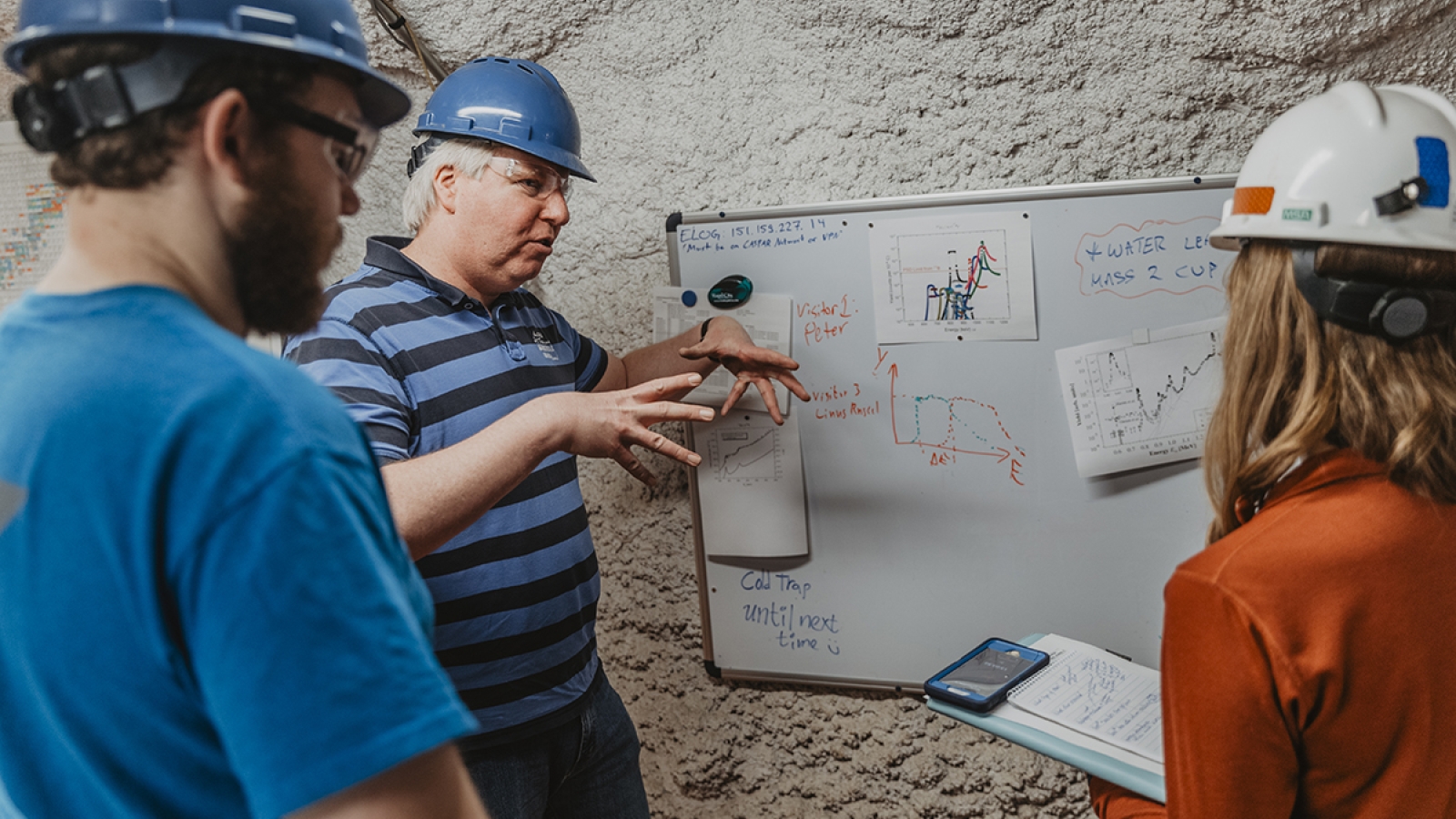 Enflaming night skies like the fires of a billion isolated blacksmiths, the nuclear burning inside aging and collapsing stars produces about 50 percent of the elements on the periodic table.

Young stars begin with the basics. Hydrogen, remnant of the Big Bang, fuses together inside the core of adolescent stars, producing helium. As stars get older and hotter, they begin to fashion heavier elements like carbon, oxygen and neon. In the last throes of life, the star will create hefty elements from iron to uranium before dying a brilliant death, blasting these elements into space where they will eventually coalesce into planets or reignite into a new generation of stars.

This occurs on a timescale marked by eons, creating worlds that won’t come into existence until long after our own dissipates. However, by studying the ongoing handiwork of stars, researchers are discovering how the elements in our own world were formed long ago.

Today, astrophysicists are studying the individual stellar processes that created our planet—the nitrogen-saturated skies, the gold-riddled crust and the carbon-infused surface.

“Our goal is to explain where these elements in our natural environment came from, how they were produced and how they made their way to us, because that's to some extent still unknown,” said Frank Strieder, principal investigator of the Compact Accelerator System for Performing Astrophysical Research (CASPAR). The experiment, housed on the 4850 Level of the Sanford Underground Research Facility (Sanford Lab), is designed to look at how a range of these elements—from iron to uranium—were originally formed inside stars.

“From all the reactions that happen in the stars, we take a couple of important reactions and study them case-by-case,” explained Strieder, who is a professor of physics at the South Dakota School of Mines & Technology (SD Mines).

After firing alpha particles down the beamline at other elements like boron and graphite over the past two years, researchers are introducing CASPAR’s beamline to a new target: neon-22.

To build bulky elements like iron, silver and xenon, the nucleus of a smaller atom must capture a stray neutron in a transformation called the s-Process. The s-Process, or the slow-neutron capture process, is well-understood by researchers today.

What remains a mystery—and the current focus of CASPAR’s research—is the sheer abundance of neutrons available in the stars.

On their own, neutrons are unstable, lasting just 15 minutes before decaying into a proton, an electron and an antineutrino. To feed the star’s ongoing demand for neutrons, there must be a source constantly producing these short-lived particles en masse.

One possible candidate is neon-22. Alongside the heavy-element formation inside a star, neon-22 is transforming into magnesium-25. When this happens, a single neutron is emitted.

While researchers know this reaction is responsible for some of the neutrons that briefly hurtle through the stars, they are unsure just how much this reaction supports the star’s impossibly high demand for neutrons.

Answers from the underground

On the surface of the earth, significant backgrounds have long kept researchers from studying neon-22’s transformation at the same energies that would occur inside a stellar environment. While they can replicate the reaction at higher energies, the data needs to be extrapolated down, leaving large gaps of uncertainty.

But CASPAR’s low-energy beams, shielded by a mile of rock, can mimic reactions at relevant energies.

This month, researchers are prepping for a test that could reveal how integral neon-22 is to the production of neutrons in a star—or tell them to look elsewhere for the source of these flighty particles.

To duplicate neon-22’s transformation into magnesium-25, the team will focus a beam of alpha particles on a chamber filled with neon gas.

“The challenge with this experiment is the neon itself. Neon is a noble gas, and it is nearly impossible to deposit neon atoms onto a solid target and keep them there. That’s why we have to use a gas target,” explained Tom Kadlecek, a PhD student at SD Mines who is working on the neon-22 campaign.

The accelerator beam travels in a vacuum through a beam pipe that is guided by magnets. The team designed a unique chamber that allows neon gas to circulate through a portion of the beamline. A detector surrounds this section, poised to count the number of neutrons produced as the beamline collides with neon gas.

“We will run this test over the course of a couple of weeks, measuring first at higher energies, then going as low as possible,” Strieder said. “From this experiment, we can calculate the number of neutrons per second that are produced inside the core of the star.”

By gaining a better understanding of this isolated reaction, CASPAR’s latest experiment could enhance current stellar models. More importantly, perhaps, it could explain how life-giving elements are formed deep in the heart of collapsing stars. 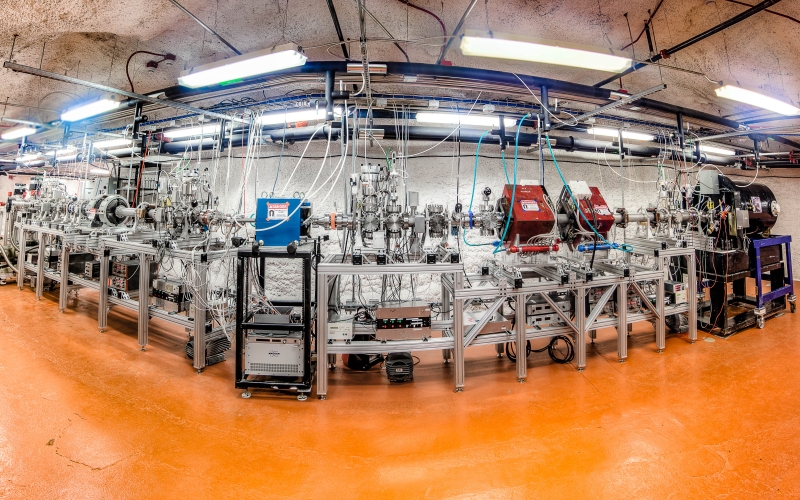 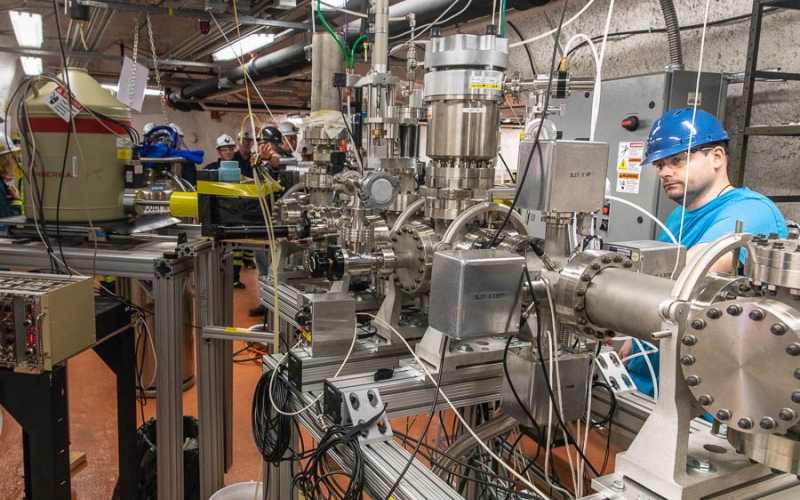