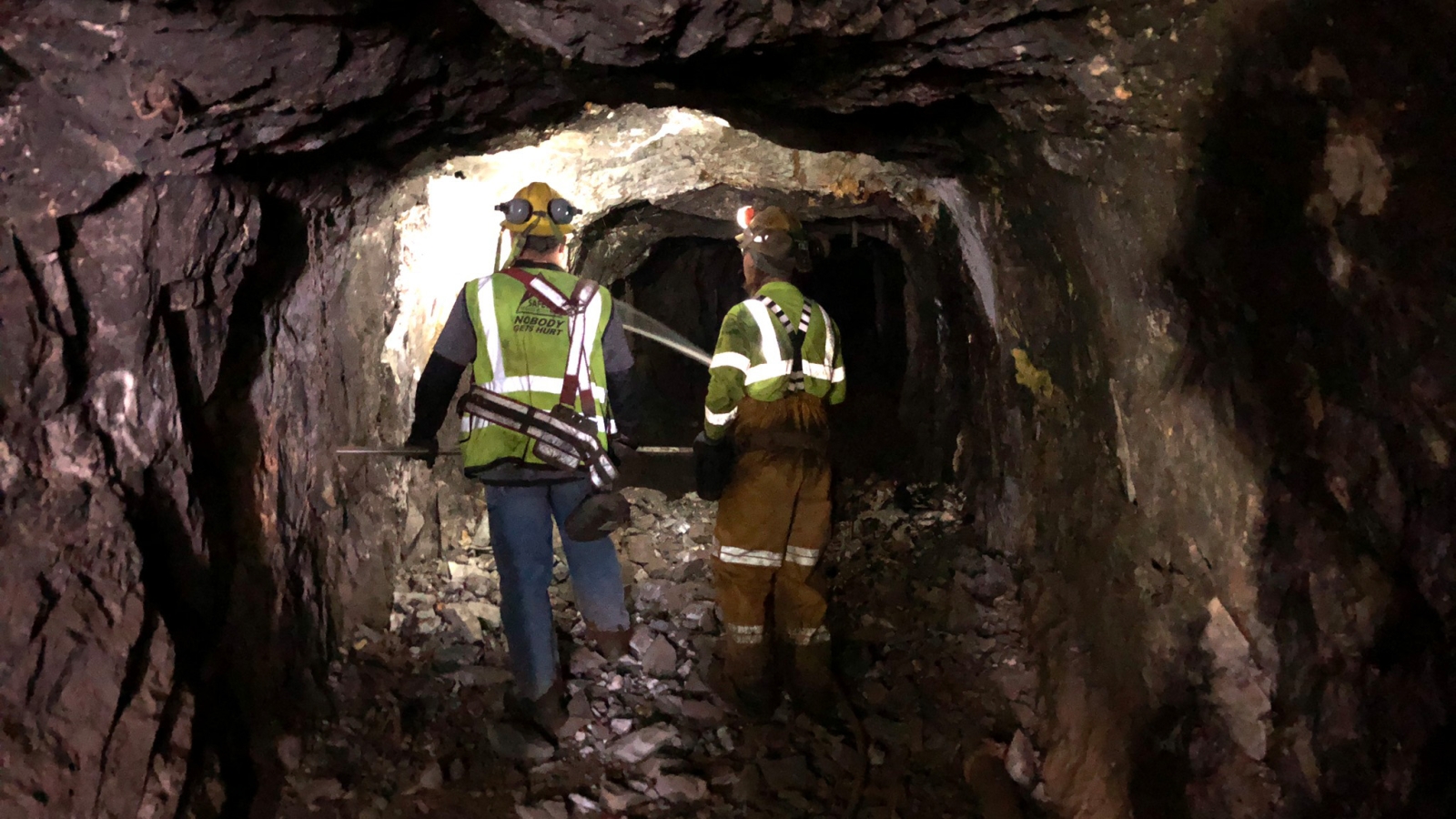 Excavation activities for the Long-Baseline Neutrino Facility began with first blast on June 23. Workers inspect the space cleared by the blast 3,650 feet below ground at the Sanford Underground Research Facility in South Dakota. They will eventually excavate hundreds of thousands of tons of rock to make way for the international Deep Underground Neutrino Experiment, hosted by Fermilab, and LBNF, which is the infrastructure that supports and houses the experiment.

This article was originally published by Fermilab. See original.

It started with a blast.

The blast is the start of underground excavation activity for the experiment, known as DUNE, and the infrastructure that powers and houses it, called the Long-Baseline Neutrino Facility, or LBNF.

Situated a mile deep in South Dakota rock at the Sanford Underground Research Facility, DUNE’s giant particle detector will track the behavior of fleeting particles called neutrinos. The plan for the next three years, is that workers will blast and drill to remove 800,000 tons of rock to make a home for the gigantic detector and its support systems.

“The start of underground blasting for these early excavation activities marks not only the initiation of the next major phase of this work, but significant progress on the construction already under way to prepare the site for the experiment,” said Fermilab Deputy Director for LBNF/DUNE-US Chris Mossey.

The excavation work begins with removing 3,000 tons of rock 3,650 feet below ground. This initial step carves out a station for a massive drill whose bore is as wide as a car is long, about four meters.

The machine will help create a 1,200-foot ventilation shaft down to what will be the much larger cavern for the DUNE particle detector and associated infrastructure. There, 4,850 feet below the surface — about 1.5 kilometers deep — the LBNF project will remove hundreds of thousands of tons of rock, roughly the weight of eight aircraft carriers.

The emptied space will eventually be filled with DUNE’s enormous and sophisticated detector, a neutrino hunter looking for interactions from one of the universe’s most elusive particles. Researchers will send an intense beam of neutrinos from Fermilab in Illinois to the underground detector in South Dakota – straight through the earth, no tunnel necessary – and measure how the particles change their identities. What they learn may answer one of the biggest questions in physics: Why does matter exist instead of nothing at all?

“The worldwide particle physics community is preparing in various ways for the day DUNE comes online, and this week, we take the material step of excavating rock to support the detector,” said DUNE spokesperson Stefan Söldner-Rembold of the University of Manchester. “It’s a wonderful example of collaboration: While excavation takes place in South Dakota, DUNE partners around the globe are designing and building the parts for the DUNE detector.”

A number of science experiments already take data at Sanford Underground Research Facility, but no activity takes place at the 3650 level. With nothing and no one in the vicinity, the initial excavation stage to create the cavern for the drill proceeds in an isolated environment. It’s also an opportunity for the LBNF construction project to gather information about matters such as air flow and the rock’s particular response to the drill-and-blast technique before moving on to the larger excavation at the 4850 level, where the experiment will be built.

“It was important for us to develop a plan that would allow the LBNF excavation to go forward without disrupting the experiments already going on in other parts of the 4850 level,” said Fermilab Long-Baseline Neutrino Facility Far-Site Conventional Facilities Manager Joshua Willhite. Following a period of excavation at the 3650 level, the project will initiate excavation at the 4850 level.

Every bit of the 800,000 tons of rock dislodged by the underground drill-and-blast operation must eventually be transported a mile back up to the surface. There, a conveyor is being built to transport the crushed rock over a stretch of 4,200 feet for final deposit in the Open Cut, an enormous open pit mining area excavated in the 1980s. As large as the LBNF excavation will be, the rock moved to the surface and deposited in the Open Cut will only fill less than one percent of it.

Excavation at the 3650 level will be completed over the next few months, with blasting at the 4850 level planned to begin immediately after.

Learn more about the science of the DUNE experiment at lbnf-dune.fnal.gov.

Work on LBNF and DUNE is supported by the DOE Office of Science and international partners in more than 30 countries.

Fermilab is supported by the Office of Science of the U.S. Department of Energy. The Office of Science is the single largest supporter of basic research in the physical sciences in the United States and is working to address some of the most pressing challenges of our time. For more information, visit science.energy.gov.