Cryogenics are critical to the success of the Deep Underground Neutrino Experiment.
Constance Walter 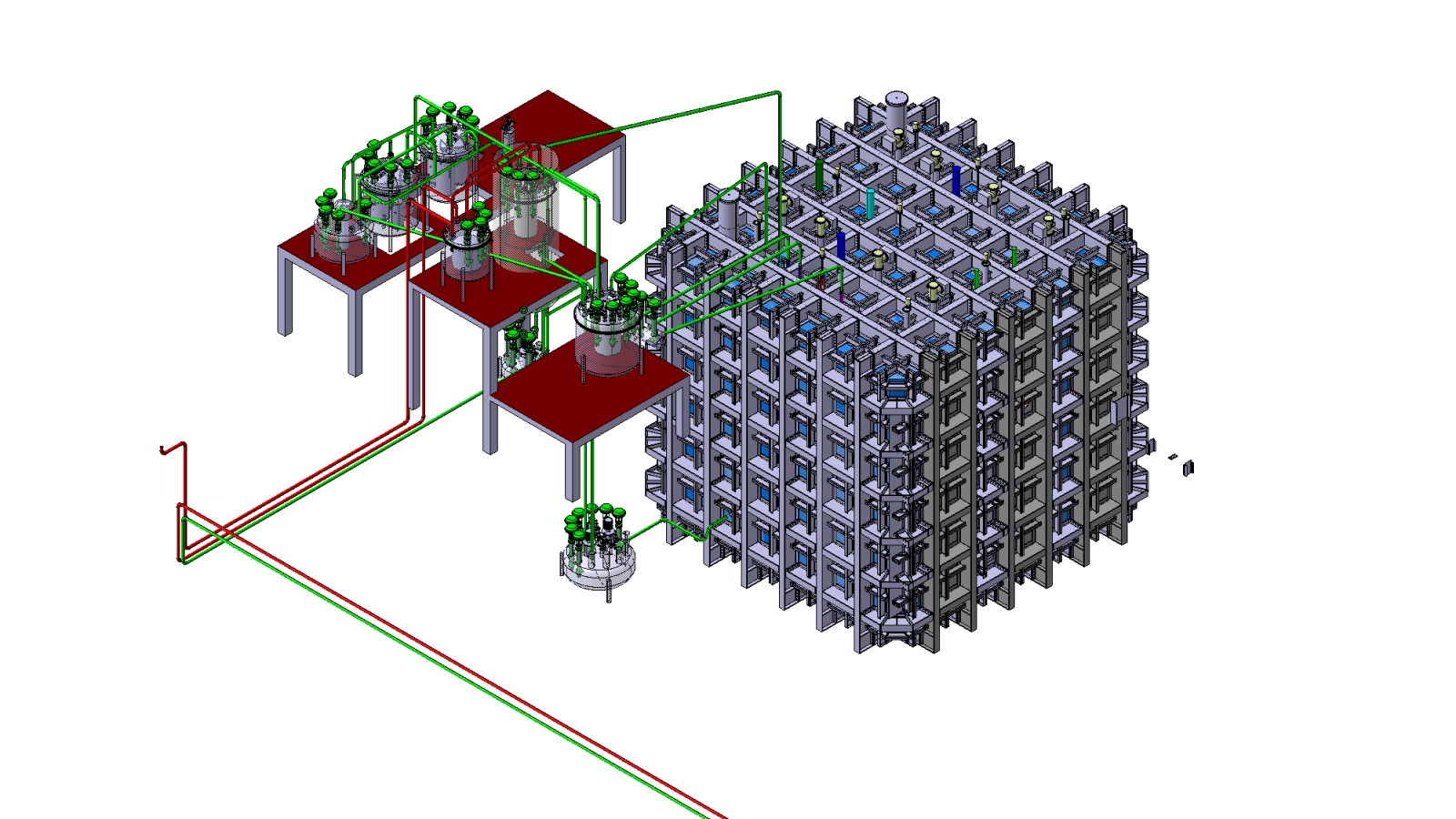 Rendering of the cryostat housing the dual-phase DUNE prototype detector and its cryogenics system.
Image Courtesy of CERN.

In the next frontier of particle physics, scientists with the Long-Baseline Neutrino Facility and associated Deep Underground Neutrino Experiment (LBNF/DUNE) hope to make discoveries about neutrinos that could answer fundamental questions about the origins of the universe, learn more about the properties of neutrinos and do further studies in proton decay. They will do this by sending a beam of neutrinos 800 miles through the Earth from Fermi National Accelerator Lab (Fermilab) in Batavia, Ill., to underground detectors at the Sanford Underground Research Facility in Lead, S.D.

But before they can begin that work, they need to be sure the detectors and cryogenic systems will work the way they need them to. That’s where engineer David Montanari comes in.

Montanari, the cryogenics infrastructure DOE project manager for the LBNF Far Site Facilities and the U.S. liaison at CERN for LBNF, oversees the design of the DOE scope of the cryogenics systems that will cool and purify the liquid argon inside the cryostats. It’s a big experiment—DUNE will be 100 times bigger than any liquid-argon particle detectors that have come before—that requires big prototypes.

“Large cryogenis systems are not a mystery. They have been done before and they exist in the industry,” Montanari said. For example, he said, the gas industry uses large tanks to store and cool natural gas and move the liquefied version around the world. “There are large air separation plants where they’ve produced liquid argon and liquid nitrogen—the liquid gases that we use in our experiments,, one as a mediumthe oter as a coolant—and they can make it pure. The point is always that we want to make the liquid argon super pure, detector grade; that is what separates us from industry.”

DUNE scientists chose liquid argon for its high sensitivity to particle interactions and its capability to identify the topology of the interactions themselves. And it is relatively cheap. In essence liquid argon provides a huge mass at a finite cost and high resolution. To keep it in a liquid state, it must be cooled to minus 301 degrees Fahrenheit (minus 184 degrees Celsius or 88 degrees Kelvin).

The large DUNE prototypes being designed now are not be the first. Scientists built and tested a small, 35-ton at Fermilab

“This proves that that we can make a cryostat with the membrane cryostat technology (the same planned for LBNF/DUNE), put a detector inside and achieve the purity we need,” Montanari said. “Now, we want to do it bigger and and make sure the bigger one is pure as well.”

“This is important because we want to optimize the design and construction,” Montanari said. “So, by the time we go to LBNF/DUNE, we know how to make it and how to make it faster and better.”

In a presentation at the recent DUNE Collaboration meeting, co-spokesperson Mark Thomson, professor of physics at the University of Cambridge, said the goal is to have the prototypes completed by the fall of 2018. “In comparison,” he said, “the Empire State Building was built in 400 days.”

It’s an aggressive timeline, but one with a purpose, Montanari said. The prototypes will be built at CERN and the Collaboration plans to use a particle beam produced by a particle accelerator to test the prototypes. “The timing is essential because the DUNE collaboration wants to take physics data with the beam as long as there is a beam.”