“Everything has to be bigger, colder, or more sensitive. Science always pushes engineering one step further,” said Christopher Mossey, the Fermilab Deputy Director for the Long-Baseline Neutrino Facility (LBNF).

Mossey leads an international team of engineers, scientists and other specialists who are designing and overseeing the construction of LBNF—a facility spanning two laboratories more than 800 miles apart. This facility provides everything, from caverns to cryogenic systems to particle beams, to power the international Deep Underground Neutrino Experiment (DUNE) to be installed at LBNF.

The experiment begins at the Department of Energy’s Fermi National Accelerator Laboratory (Fermilab) near Chicago, where a particle accelerator will propel a beam of neutrinos 800 miles through the Earth to underground detectors at the Sanford Lab in Lead. Four massive cryostats outfitted with electronic equipment and filled with 70,000 tons of liquid argon will detect neutrino activity. It works like this: rarely, neutrinos will interact with argon nuclei, creating signatures that will help scientists better understand the properties of neutrinos and, quite possibly, determine why matter exists at all.

At Neutrino Day X, Sanford Lab’s tenth-annual free science festival, Mossey will expound on the challenges and the novel engineering solutions needed to make DUNE possible. Mossey, a retired and decorated rear admiral with the United States Navy, has more than three decades of experience leading the design and construction of environmental and facility programs for the Department of the Navy. Mossey previously served as the commander of the Naval Facilities Engineering Command.

“Neutrino Day gives people throughout the region the opportunity to learn more about the exciting initiatives happening in their backyard—or deep underground,” Mossey said. “These engineering processes are creating a space that could help us better answer fundamental questions about the nature of the universe.”

One of the biggest challenges for LBNF is the excavation of about 875,000 tons of rock from the 4850 Level of the Sanford Lab to make space for the enormous DUNE detectors. The rock must be removed using advanced blasting techniques—without interrupting other extremely sensitive experiments taking place on the 4850 Level. Additionally, the team had to design blasting procedures in a way that would minimize the impact on the facility’s vast underground system of drifts (tunnels) and shafts.

“We conducted a test blast program to insure the over-pressured air and rock vibrations would have minimal impact on the other experiments,” Mossey said. “We got great information that way, such as how to best synchronize the timing and the size of each blast. We also now understand the safeguards we need to implement, like creating a bulkhead to mitigate the effects of the blasts.”

The next behemoth task is removing the rock from underground. The rock will be carried up the Ross Shaft and crushed at the surface, then transported along a 3,700-foot conveyor system, over Highway 85 and into the Open Cut.

“This conveyor repurposes an old tramway that was used during the gold-mining days,” Mossey said. “The tramway has to be reinforced and renovated in places, but it allows us to use an existing path through the mountain to deliver the rock to the open cut.”

Once the underground caverns have been excavated, the team must build the four cryostats that will hold the liquid argon, along with numerous monitoring systems. CERN, the international research laboratory in Geneva, Switzerland, is playing a critical role in the construction of LBNF through the CERN Neutrino Platform under the leadership of Marzio Nessi. Besides building massive prototype cryostats to test the various technologies planned to support the neutrino detectors, CERN will build the first cryostat underground at Sanford Lab. Materials for these cryostats, which will be 25 times larger than the prototypes, include the highest commercially produced steel beams in the world and the same technology for the cold vessels adopted by the LNG sea carriers to transport liquid natural gas.

How will these materials be delivered to the cavern?

“You have to get every single one of these pieces down a narrow shaft,” Mossey explains. “The cryostats will be delivered in tens of thousands of pieces. The steel beams have to be lowered through the shaft, navigated around drift corners and assembled on-site.”

The 70,000 tons of liquid argon will be cooled and maintained at negative 300 degrees Fahrenheit. Pipes will move argon gas down the utility compartment in the Ross Shaft; once it reaches its destination, the argon will be liquefied and stored in vessels designed with technology borrowed from the natural gas industry. DUNE’s massive insulated vessels will feature a membrane system that is similar to one used by liquid natural gas transport ships.

The construction at the 4850 Level is only half of the project. Mossey also directs the LBNF engineering systems at Fermilab, where LBNF will build the beam line that will use an existing particle accelerator ring to help create the neutrinos that will go straight through the Earth to South Dakota. When DUNE begins operations, a beam of particles, bent by powerful magnets, will be send toward a carbon target, and directed through a straight, 200-meter-long “decay pipe,” creating muon neutrinos that will race toward the detectors at Sanford Lab.

“It starts with a room full of experts who can inform each other’s ideas,” Mossey said. “Each choice impacts other systems.”

An integration team puts potential solutions into computer-aided designs (CAD) to ensure the processes will fit together seamlessly.

“It requires us to simulate, prototype and examine the assumptions we make about how everything will integrate,” Mossey said. “We have layers of CAD drawings to simulate how a minor change can affect a detector module, within a cryostat, within a cavern.”

Mossey says understanding the tenets of engineering is vital because they impact every aspect of our lives—from the mundane to the interstellar.

“Engineers are problem-solvers,” Mossey said. “Engineering enables everything from supporting the utilities throughout a small city like Lead, to building the systems that probe the universe.”

DUNE and LBNF on the Move

Adapted from the July 21, 2015 edition of Fermilab Today By Joe Lykken 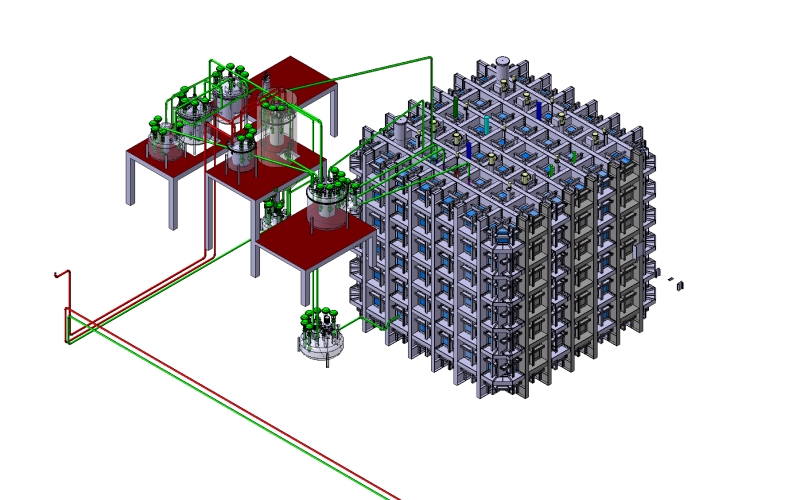 Cryogenics are critical to the success of the Deep Underground Neutrino Experiment.
Full Details