The experimental art of particle physics 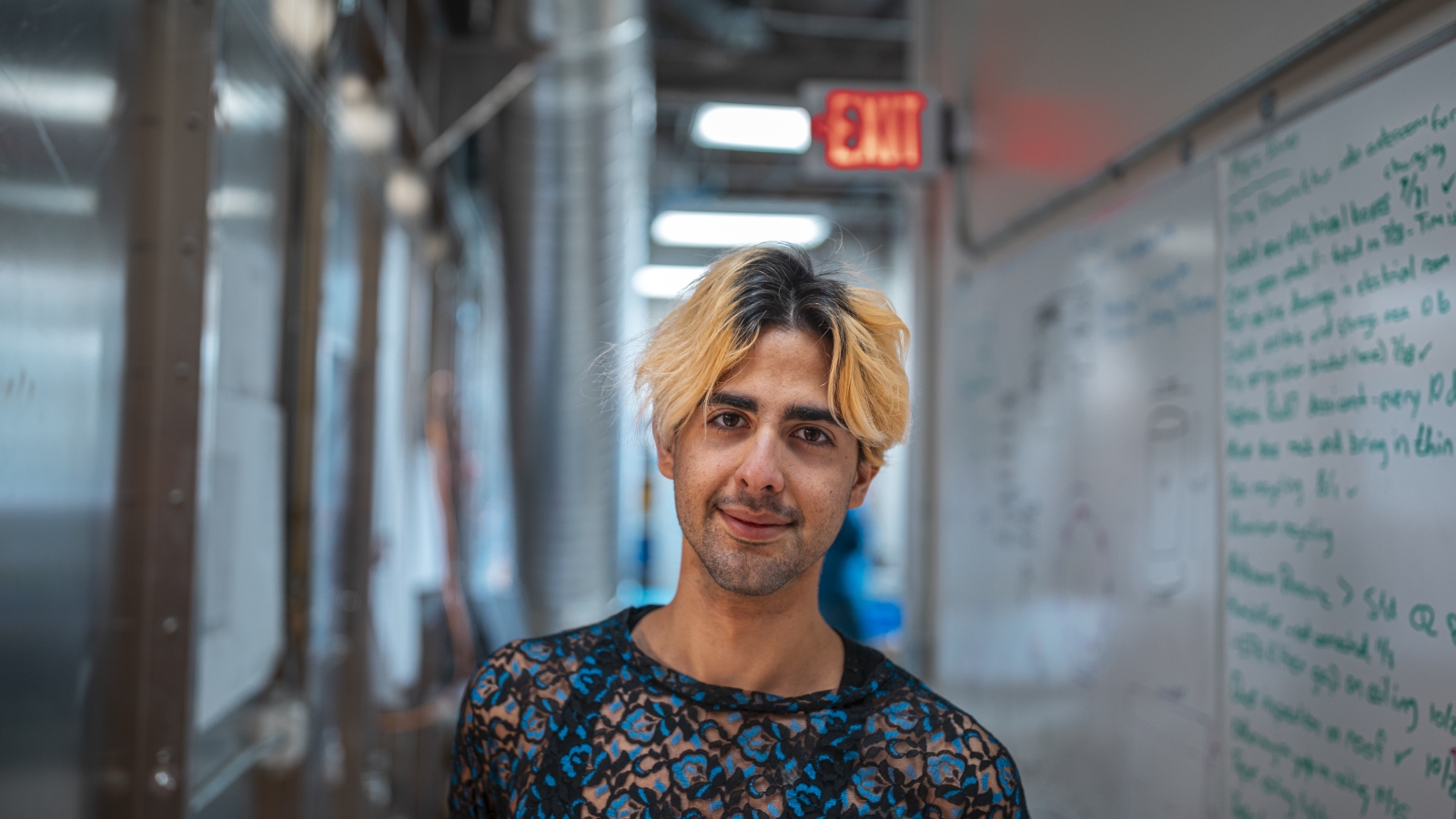 Nicolas Angelides didn’t intend to be a physicist. It was art that first captured his attention. These days, however, he sees very little distinction between the two disciplines.

At work, Angelides is covered head-to-toe in cleanroom garb as he works on assembling a world-class xenon detector. But you might be surprised to know he considers himself first and foremost an artist, who spends a lot of time studying physics.

A graduate student studying experimental physics at University College London (UCL), Angelides works as the cleanliness monitor on the LUX-ZEPLIN (LZ) dark matter experiment at Sanford Underground Research Facility (Sanford Lab). According to the LZ team, he brings meticulous attention to detail, sincere enthusiasm and a fabulous sense of style to the collaboration.

We recently spoke with Angelides about growing up in Cyprus, finding a home amid the artistic community and his opportune brush with the beauty of physics. The interview has been condensed and edited for clarity.

Where does your story begin?

I was born and raised in Cyprus, a relatively small island on the very east side of the Mediterranean. My family is a rather big, Mediterranean family. I have two older brothers and multiple dozen cousins.

My parents were robbed of the opportunity to go to university because of military disputes that were happening on the island. So growing up, I was encouraged to pursue a university education.

My older brothers flew through school without incident. And then here comes me. I was weird to say the least. I never cared about fitting in. As a child and a teenager, my main goal was to become a sculptor. My parents weren't entirely delighted by that, but they trusted me—to a degree. Being born gay in a very religious culture also meant that I wasn't very close to my family.

Because of that, the first community I really took to was the artist community. I joined a studio in Cyprus, and there I found a home. Joining that studio gave me my first opportunity to embrace art and commit myself to it. It also provided interesting conversations about philosophy. There, for the first time, I saw the philosophical, questioning side coming out of me.

I was doing both sciences and art in school in Cyrus, but neither of those would've been enough to help me apply to a university. To improve my chances of getting into institutions in the United Kingdom, I began taking qualifications and site exams—things I could be doing in the afternoons and outside of school. I picked up math, physics, chemistry and other subjects. It was encouragement from teachers and parents, and I was just having fun.

All of this with the goal of studying art in the United Kingdom (UK)?

Right. I was taking math and sciences, but at the end of the day, I wanted to be an artist. But everything changed when I started seeing physics as more of an art than a science.

In the studio, I try to isolate and represent elements of nature in materials. Let's say I take something that isn't material, like a movement or an emotion, and I try to put it in a material like clay or charcoal—I try to communicate in a way that people can visualize what I am trying to tell them.

In the same way, that's what physics does. Using numbers and computer code, it puts together beautiful models that isolate and represent elements of nature.

Over the course of a few weeks, I had this change. Suddenly, I wanted to be an artist doing physics. And I think that's exactly what I ended up doing.

How did you end up working at an underground laboratory in South Dakota?

Let's go back to the ‘I never fit in, and I was a bit of a rebel artist.’ At one point, before I was finished with school, I applied to university for a degree in physics. An offer came from the University of Edinburgh. I was 16 at the time.

Although my parents didn't really enjoy the idea of sending me away early, they let me go. I walked in and said, 'I'm going to do things my way.' Sometimes I think I robbed them of a normal child. Four years later, I graduated with a theoretical physics master's degree from the University of Edinburgh.

During my time there, I had the wonderful opportunity to work with the LZ dark matter group. I was very eager; I always wanted to do more. During the summer, I would stay in Edinburgh, doing part-time receptionist work to support myself financially and then doing research at the university. I made great connections and managed to be part of LZ at a very early time as an undergraduate. I knew I wanted to be a Ph.D. student, so I applied to a few universities, both within the UK and the EU (European Union). I ended up joining UCL.

My position with UCL is interesting because my time is split 50/50: 50 percent is spent studying particle physics (what LZ is doing), and 50 percent is spent studying cosmology (studies of the history of the universe using astrophysical observations). The idea of the project, which I'll be returning to when I go back to London, is to bridge the worlds of cosmology and particle physics.

Over the past couple of months, you’ve really invested in community outreach. Can you talk about why science outreach is important to you?

I have two main drives for my passion for outreach. The main one is that, to be part of the physics community is to be really excited about physics. I want to show people that we can study the universe, break it down, characterize it, understand what it's made of and still maintain, if not enhance, the universe’s beauty.

Knowing how a rainbow comes about doesn't take anything away from the beauty of a rainbow. You can create rainbows once you understand how rainbows are made.

This is what physicists want to do. We want to understand where we are living, what we are touching and interacting with and hopefully help people along the way. We could move toward a more energy efficient future, become more aware about the stars and the galaxy and how we can expand civilization. Who knows?

The second reason I love outreach is more selfish. I came into science from a weird angle. I came in inspired by the beauty and the artistry that goes into science. I want to show people that if you can't imagine yourself sitting down over a desk solving equations all day, that's okay. That’s not what physics is about. You could be in the middle of the beautiful Black Hills building a dark matter detector!

Let's circle back around to the reason you got started in the first place. Are you still making art?

One of the reasons I chose London for my Ph.D. is because I am in the center of it all. In a collaboration with students from the Royal College of Art in London, an exhibition was put together, highlighting the beauty of topics in physics. I worked on a piece in that collection that was called Instance. I've also given loads of talks. It's really where we allow physics to be the inspiration for other things that I've had the most fun, like the exhibition or outreach events.

There is a degree of freedom in research paralleled only by studying art. In both areas, you pick a topic, study it, and it results in several pieces. Whether it’s art pieces or experiments, you do loads of projects, always building on toward a result.