Green thumbs in the Ross Hoistroom 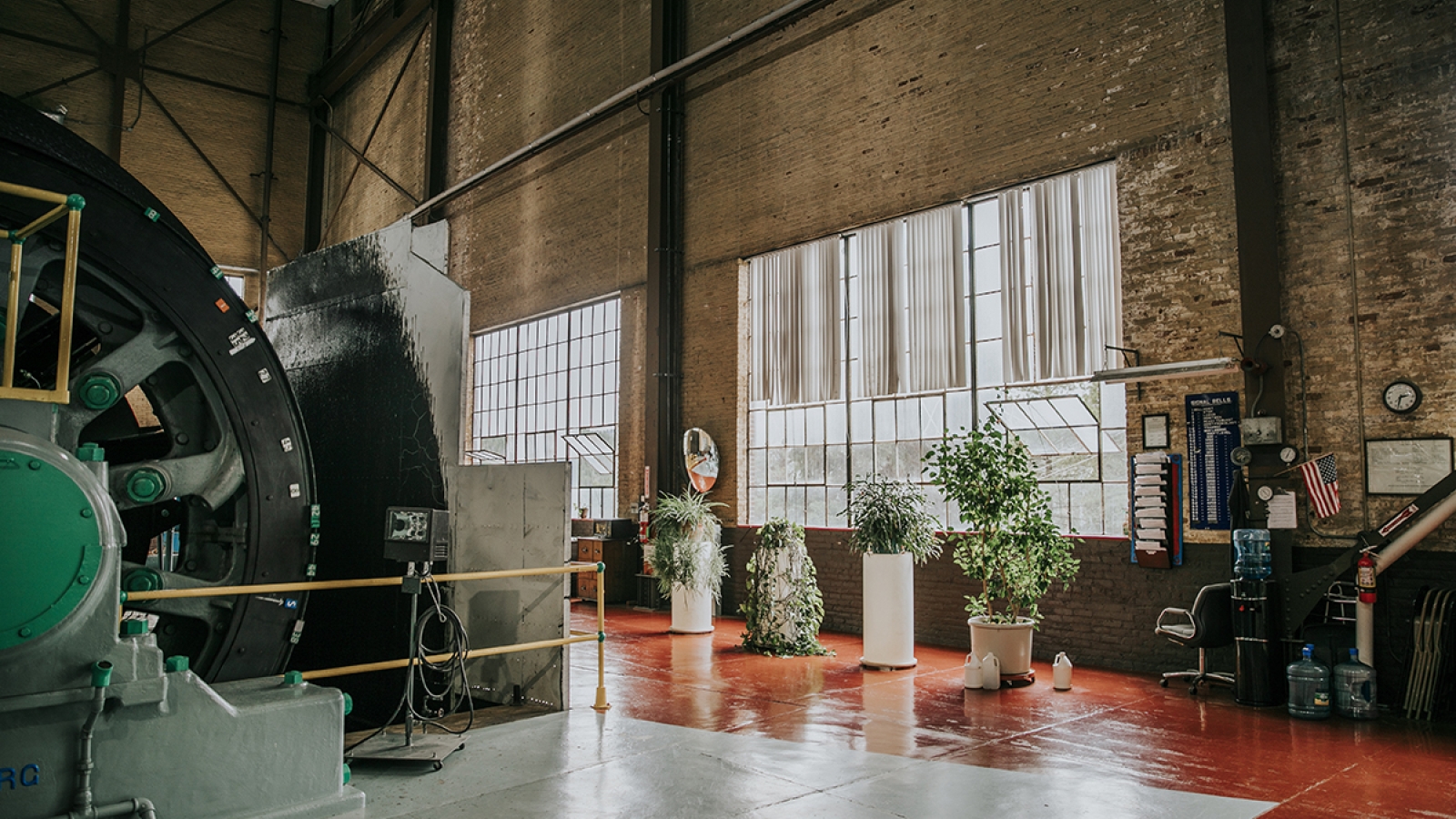 A collection of plants grow in the Ross Hoistroom.

In the Ross Hoistroom, thick rope spools like thread around massive conical drums. The heavy braid of hemp and steel rope extends from the hoistroom to the Ross Headframe, raising and lowering a cage conveyance throughout the 5,000-foot underground Ross Shaft. From their platforms, hoist operators monitor the ropes as they coil around the drums, bringing the cage up the shaft, then uncoil again, lowering the cage back underground. The background hums as generators transform alternating current electricity into direct current, and the drone is occasionally interrupted by radio messages from the cagers in the shaft: Cage to the 4850… Cage down on chairs…

The Ross Hoistroom is an engine for underground travel at Sanford Underground Research Facility. In the past decade, the engineering powerhouse has served an additional, and rather unexpected, purpose.

Many features of the building—from its wide, west-facing casement windows to its regulated ventilation and warm temperatures—make it oddly akin to a greenhouse. Even the constant hum of the motor-generator sets seems to urge the growth of plants.

“Because plants love music, the noise and vibrations of sound. You’re supposed to talk to them, you know, and I think the noise has a lot to do with encouraging growth,” said Cindy McCormick, a hoist operator in the Ross Hoistroom and resident green thumb.

Whatever the contributing factors, plants thrive in the Ross Hoistroom. And over the years, amidst enormous machinery, red velvet and hibiscus, dieffenbachia and schefflera, white pines, aloes, and Hindu rope plants have found a haven for growth in the hoistroom.

When McCormick became a hoist operator in the Ross Hoistroom 1993, one plant was already there. 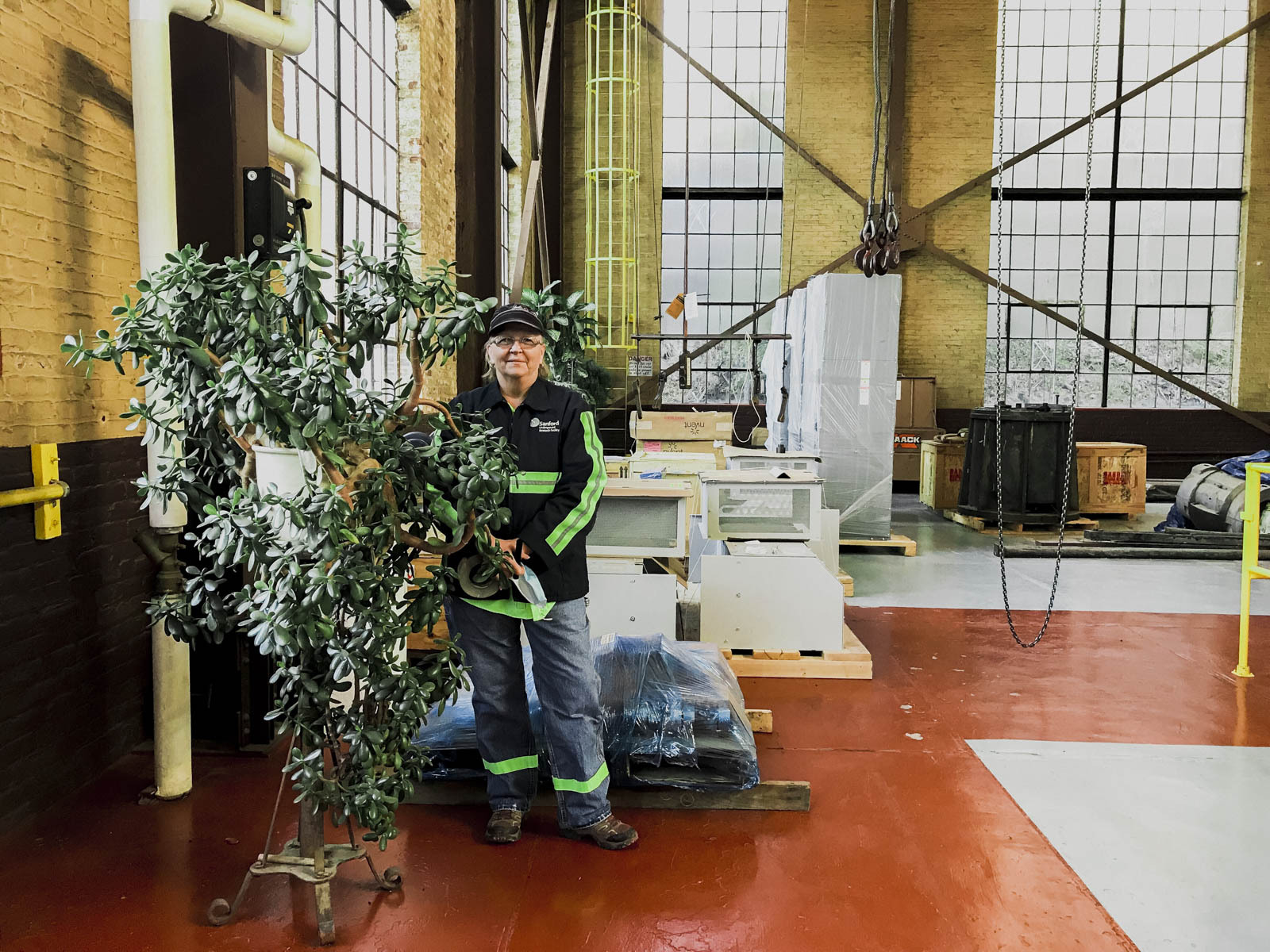 Cindy McCormick, a hoist operator at Sanford Lab, stands beside the Ross Jade, which is estimated to be over 60 years old. Photo by Erin Lorraine Broberg

“We call it the Ross Jade,” said McCormick, who heard that the jade plant was brought to the hoistroom as early as the 1950s. “It was here in the Homestake days, and when they shut down the hoistroom, it went over to the main office. There, someone must’ve overwatered it. The stems got really mushy with just a few sticks hanging over—it was just barely alive when I came back. But we got it back, and it just loves it right here.”

McCormick, Laurie Adkins, and several other hoist operators have taken in dozens of plants over the past decade. 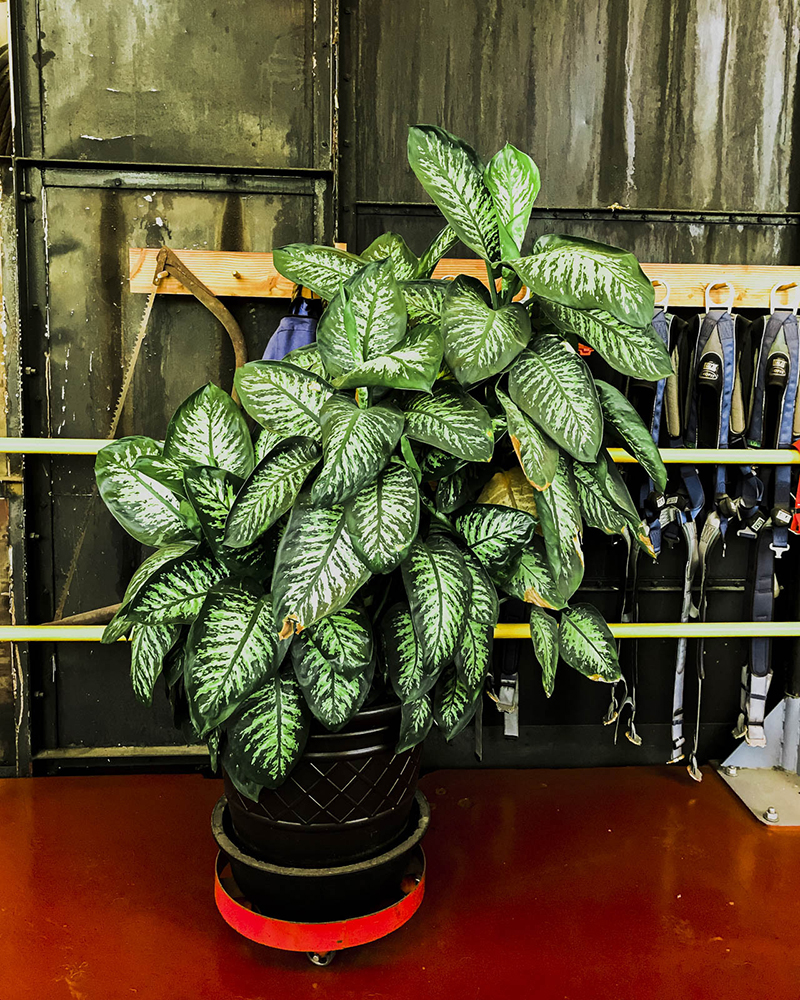 A dieffenbachia grows in the Ross Hoistroom at Sanford Lab. Photo by Erin Lorraine Broberg

And each plant has its own backstory. One was donated in a cardboard box when a friend moved to another state. Others, with shriveled stems or soggy roots, were brought in by apologetic coworkers who hoped to give their houseplants a second chance at life. Many were brought specifically as presents for the green thumbs in the Ross Hoistroom. 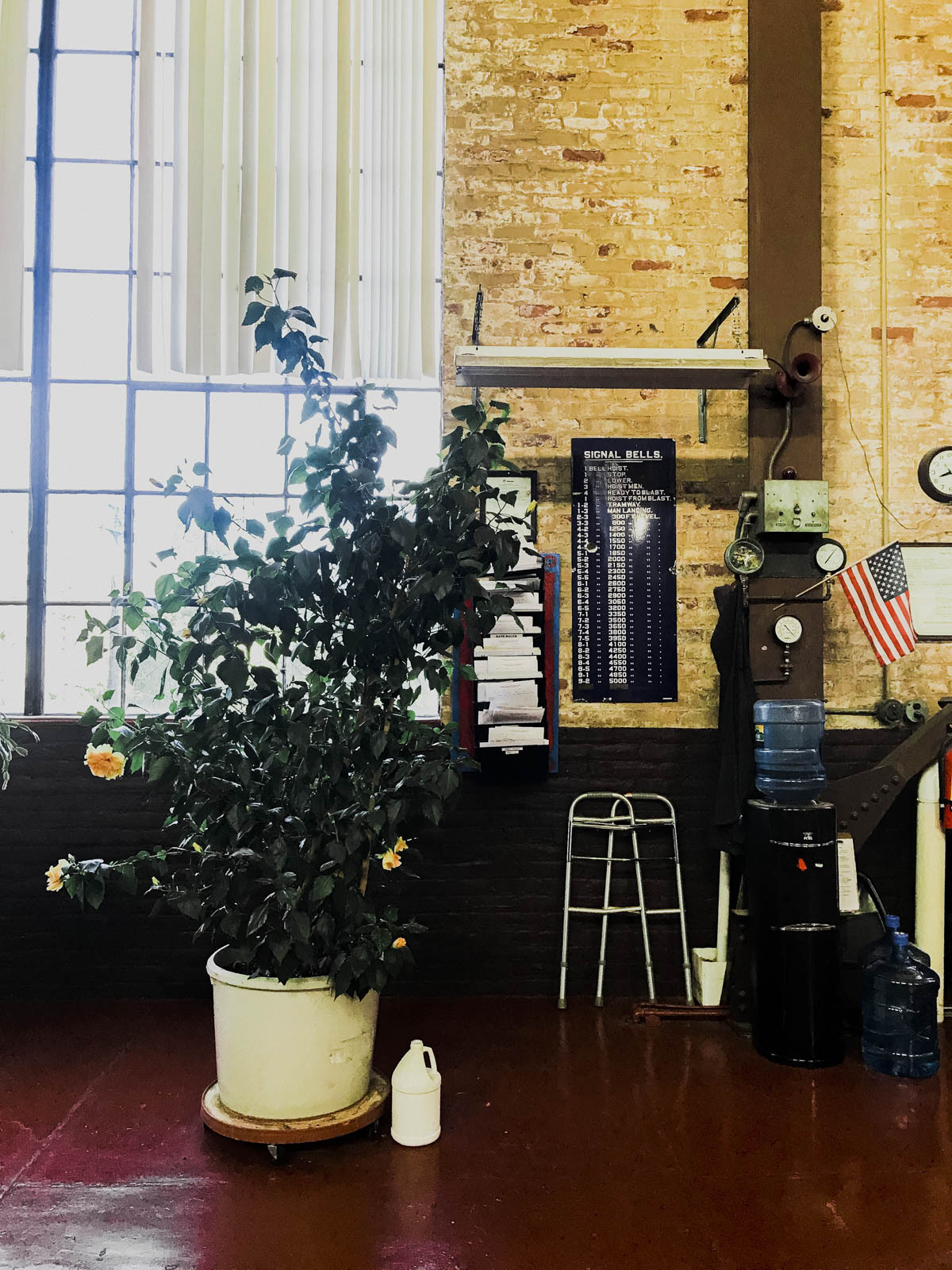 This hibiscus was "just a couple of sticks" before it was rescued from a coworker's office, McCormick recalled with a laugh. Photo by Erin Lorraine Broberg

Soon, the Ross Hoistroom will receive several planned upgrades. New electric motors will replace the AC/DC motor generator sets, and the hoist operators will work from enclosed platforms. Without the motor generator sets, the ambient temperature of the building will be considerably lower, in the fifties or sixties depending on the external weather. The changes mean the building will be much more efficient, but also less hospitable to plants.

“Some plants should do just fine in the lower temperatures, and we’ll keep those around,” said McCormick. Other plants are finding new homes in employee offices and homes. For months, McCormick has been labeling plants with their new owner’s names and giving cuttings to those who pass through. The Ross Jade, McCormick says, is among the plants that will continue living in the hoistroom.

McCormick cares for a red velvet plant in the Ross Hoistroom at Sanford Lab. Photo by Erin Lorraine Broberg 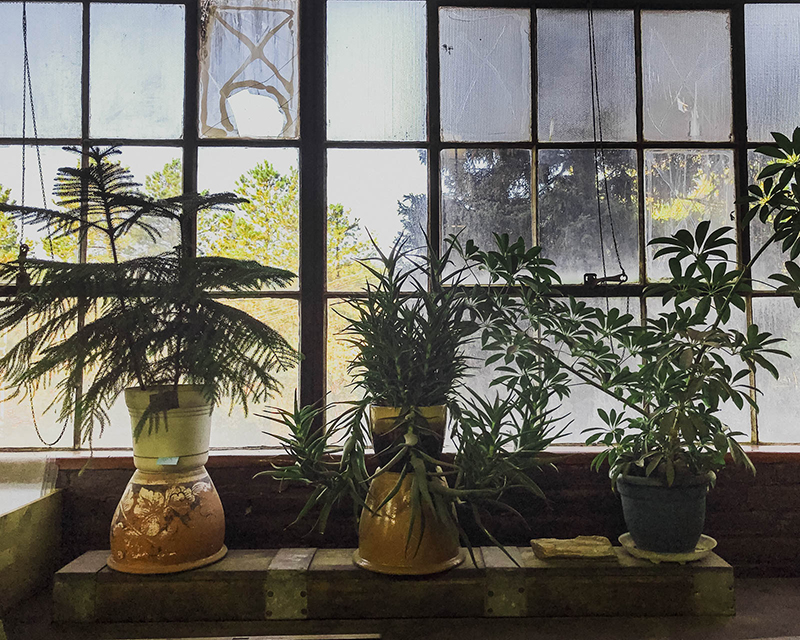 A white pine, an aloe and a schefflera plant grow against casement windows in the Ross Hoistroom at Sanford Lab. Photo by Erin Lorraine Broberg 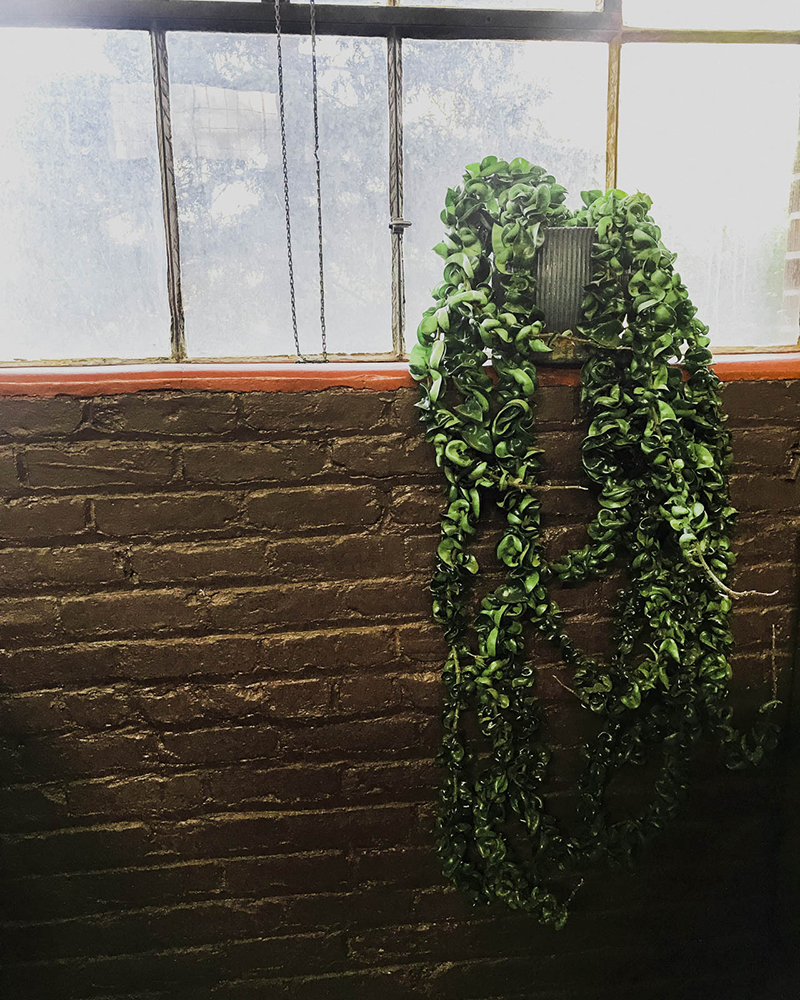 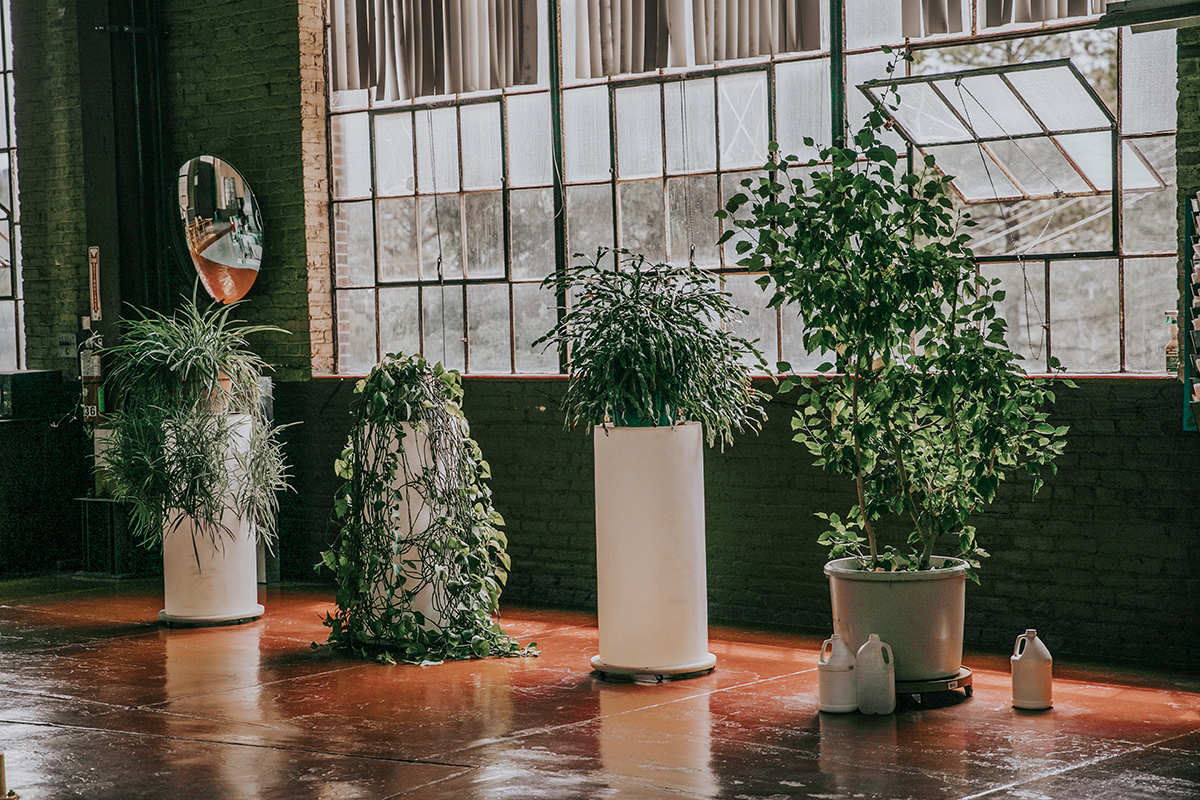 Plants in the Ross Hoistroom at Sanford Lab. Photo by Nick Hubbard