The history of the Ross Hoists 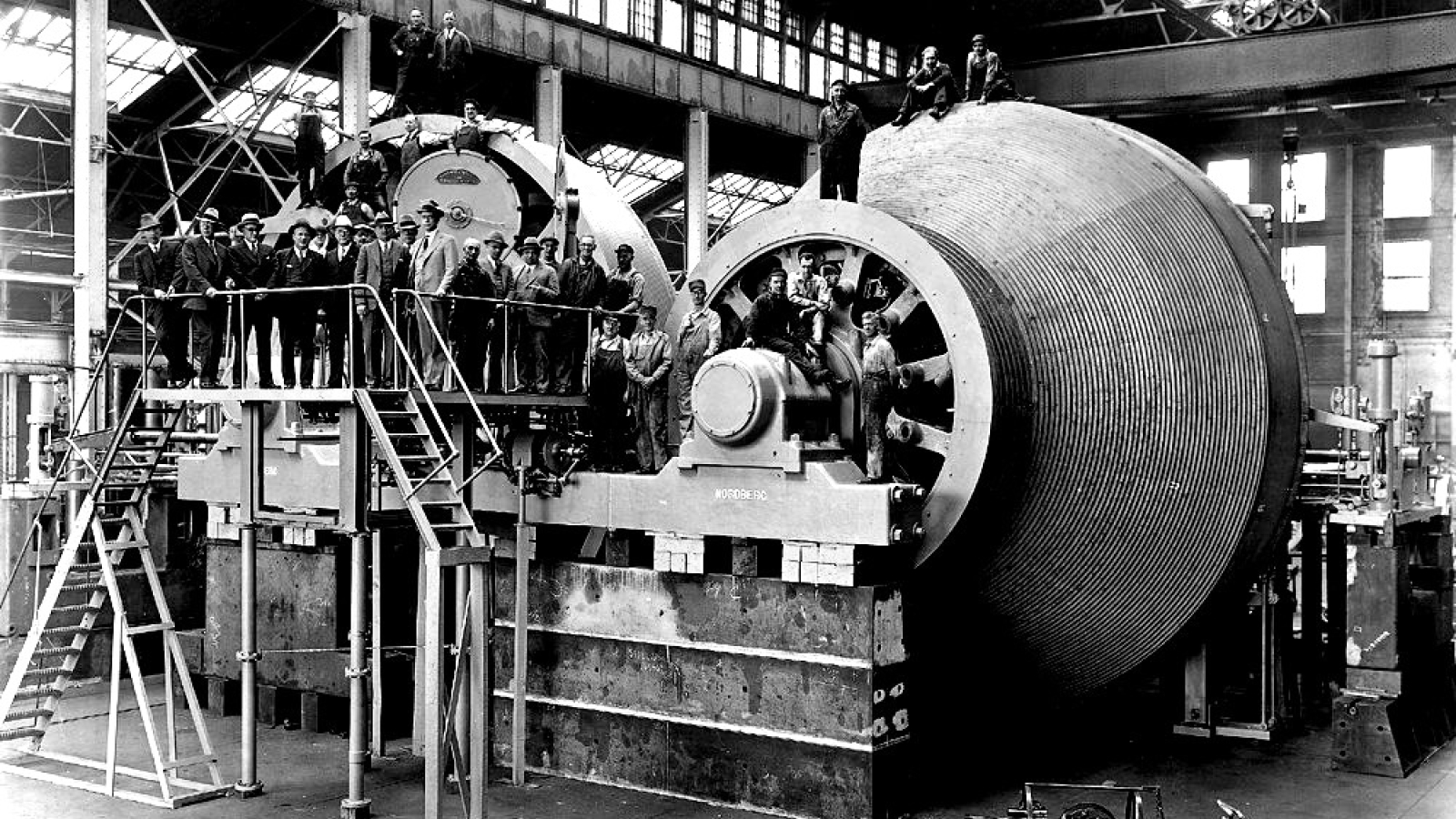 Circa 1932, this photo shows engineers and workers standing on the fully assembled Ross Hoists at the Nordberg Manufacturing plant in Milwaukee, Wisconsin. These hoists would be disassembled and shipped by rail to Lead, South Dakota, where they would operate for seven decades with Homestake Gold Mine and later for Sanford Underground Research Facility.

In September 1933, a letter was delivered to Mr. R. Williams in care of the Highland Hotel in Lead, South Dakota. The letter, sent from Nordberg Manufacturers in Milwaukee, Wisconsin, began:

“Dear Mr. Williams: Your letter and report of September 11 must have crossed our letter in the mail and covers the questions we asked in our letter. Now, in regards to the drum bushings…”

Williams was a representative of Nordberg Manufacturers on an extended trip to Lead, where the Homestake Gold Mine (Homestake) was installing two Nordberg-patented Double Drum Electric Ore Hoists. Homestake was on its way to becoming the deepest, most productive gold mine in the Northern Hemisphere; Nordberg’s hoists would be the engines behind the effort.

Between 1932 and 1934, correspondence passed from Milwaukee to Lead monthly, sometimes weekly, with inquiries into design details and updates on the installation. In addition to posted letters, several telegrams clicked across the Midwest on telegraph lines, delivering short statements.

At times, the content of the messages revealed the limitations of communications at the time. As noted in the letter delivered to Williams, sometimes letters crossed paths. And telegram authors, who were charged by the word, sent only brief bursts of information. One telegram, dated March 14, 1936, contains a curious message:

Rest assured, Williams eventually did arrive in Lead. He sent a telegram on May 12, 1936, announcing his plans to travel to Milwaukee the following day. An earlier telegram, dated January 7, 1934, and sent to Nordberg Manufacturers, contains a description of wintery road conditions that are familiar to this day:

While correspondence lessened after the Nordberg Hoists were completed in the Ross, and later the Yates, hoistrooms, it never completely stopped. Decades of letters and telegrams, together with black-and-white photographs, full-color flyers and handwritten engineering notes were compiled and stowed in an archive room in the headquarters of Nordberg Manufacturers in downtown Milwaukee.

Toward the end of the twentieth century, the Nordberg company was acquired several times, and the Milwaukee manufacturing plant was shut down, leaving only an engineering office at the location. The archive room, however, with rows of filing cabinets, binders of yellowing, onion skin pages and envelopes of microfiche, remained unperturbed.

The documents, spanning decades, provide a well-preserved paper trail of the history of the Ross Hoists.

“When you start digging through these old drawings and original blueprints, you find out a lot about how the systems changed,” said Richard Meyer, a mechanical engineer with Siemag Tecberg, the company that had acquired Nordberg’s hoisting division in 2000. “Everything is recorded in these old documents.”

In the 1930s, when most of the nation was facing a crippling economic depression, Homestake was booming. The price of gold had increased under the Gold Reserve Act of 1934. And mine planners had discovered a south-plunging ore body known as 9 Ledge, with ore averaging 0.269 ounces of gold per ton.

Homestake invested in the sinking of the Ross Shaft to chase the newly located ore body through the Earth. The shaft provided access to an additional 6.5 million tons of ore. The undertaking began in 1932, with the first rock hoisted in 1934. The shaft didn’t reach its full depth of 5,000 feet until 1956.

The Ross complex, which includes the shaft, headframe and hoistroom, was named for Homestake Superintendent Alec J. M. Ross. The Ross Headframe, which overlooks Kirk Canyon, became an iconic landmark in the Black Hills. The real power, however, resides in the Hoistroom, the unassuming brick building just a few hundred feet from the base of the towering headframe.

The original Ross hoists were manufactured at Nordberg’s Milwaukee manufacturing plant. Before the parts were shipped, Nordberg’s workforce fully constructed the hoists in their plant, ensuring everything could be installed as designed.

The hoist components were disassembled then shipped across the Midwest by railroad. The last stretch of the journey took place on the Black Hills and Fort Pierre Railroad. Built by Homestake, the rail line conveniently passed right by the Ross complex. Once they arrived, the hoists were assembled in their final home.

Homestake installed two sets of Nordberg’s double drum hoists—one set for the transportation of men and equipment, the other for skipping ore from the underground to the surface, where it could be crushed, processed and refined

At each set, two drums ran in tandem. Together, they created a counterbalancing system. As an operator lowered one conveyance, the weight of it lifted the other. While the drums could be run separately, running them together greatly reduced the energy needed to power the hoists.

The drums looked a bit like massive spools for thread but have a unique design. The diameter at one end is 25 feet, but tapers to a diameter of 12 feet at the other end, allowing them to sit opposite each other, aligned to shrink the footprint of the drums.

What makes these drums turn? A steel shaft weighing nearly 30 tons runs through the center of each drum, supporting the drums, the rope and the load on the cage. The shaft fits snugly into bearings, where it is doused continuously with circulating oil to keep everything spinning smoothly.

Energy was delivered to the Ross Hoistroom as alternating current (AC), but direct current (DC) was needed to power the massive machinery. An entire room in the Ross Hoistroom was dedicated to converting AC power to DC power. Two nearly identical motor-generator sets, one for each of the hoist sets, ran constantly inside this room. A 50-ton flywheel was also connected to the rotating shaft and was used to store and deliver mechanical power to the DC generators for times when the hoist needed additional power for hoisting

Between the counterbalance system, the DC motors and the tapered drum shape, the hoists had sufficient torque to hoist a fully loaded cage from the bottom of the 5,000-foot shaft. This hoist system continued to work through the century, enabling travel throughout the Ross Shaft at Homestake.

Robert Crane is a second-generation Ross Hoist Operator (his uncle was a hoist operator at the Ross before him), who joined Homestake in 1987. He left in 1998 as operations at Homestake began to slow, then returned in 2011 to work in the same hoistroom for Sanford Lab.

“When you hired on with Homestake, you had six months to learn every hoist on the property,” said Crane, while sitting on the operator’s platform. “And if you didn't learn them all, you were down the road. You’d learn all four surface hoists, the Yates and Ross; two at 6 Shaft; two at 4 Winze; plus, back then when I hired on, 7 Shaft was still running. So that's what? Two, four, six, eight, nine—nine hoists in six months.” Hoists for 6 Shaft, 4 Winze and 7 Shaft were all underground.

Hoist operators did more than raise and lower conveyances; they were known for their meticulous care of the hoists. And because the hoists were the engines of Homestake’s production, they ran 24/7.

“Upgrades to the hoists were pretty few and far between,” recalled Mike Johnson, who joined Homestake as an engineer in 1979 and worked for eleven years at Sanford Lab. “Basically, all repair and replace. They might have gotten new brushes, a motor replacement. If something happened and they didn’t have a spare they’d ship it out or get a contractor to work overtime to get it back into production. That was kind of the name of the game back then. Production, production.”

The hoists performed well throughout the 1900s, and Nordberg used the Homestake hoists as an example of their industry-leading technology.

For nearly 70 years, the Ross Shaft served as a main conduit for thousands of miners and millions of tons of ore. But in the late 1900s, the price of gold faltered, forcing the Homestake mine to close by 2002. The hoistrooms were cleaned and put into a static state, while discussions about the facility’s future took place.

Leaders in United States particle physics research had taken notice of Homestake, eyeing it as a possible future sight for an underground laboratory. Although the wheels of politics and financial support turned slowly, the efforts to turn the Homestake into a science facility became a reality in 2006. With a generous donation from the facility’s namesake T. Denny Sanford, a land donation from Barrick Gold Corporation and funding from the State of South Dakota, the South Dakota Science and Technology Authority (SDSTA) was formed to manage the Sanford Underground Research Facility

By 2007, the Ross Hoists were 73 years old. Although they were left in pristine condition when the mine closed, they had remained unused for years.

“They had to do a lot of work to get the hoists up and working again,” said Todd Hubbard, a mechanical engineer at Sanford Lab who worked for Homestake in the 1990s. “There were general ailments from not being used for years.

Engineers and operators completed numerous evaluations on mechanical, electrical and operational components, updating and replacing components as needed and verifying the safety of the hoists. Soon, the Ross Hoists began turning once again; this time, to support underground science.

Since 2012, a series of infrastructure improvement projects have helped restore the Ross Shaft, the Ross Headframe and the Ross Hoists. The effort prepares the system for its role in the Deep Underground Neutrino Experiment (DUNE), which will be the largest international particle physics experiment on U.S. soil. The Ross Hoists will skip more than 800,000 tons of waste rock excavated for the experiment’s caverns then move equipment, supplies and materials to build the massive detector on the 4850 Level

That this cutting-edge research is made possible by the lasting-power of 1930s engineering is not lost on those at Sanford Lab today.

“I’ve joked that the Ross Hoistroom is an operating museum,” said Al Stratman, chief engineer at Sanford Lab. “The fact that these systems are operational and reliable—it’s incredible. Every place has their histories, and this place, it's history on steroids. The shafts and the underground workings and this melding of the research and the cutting-edge technology—just cool reasons for me, as an engineer, to come to work every day.” 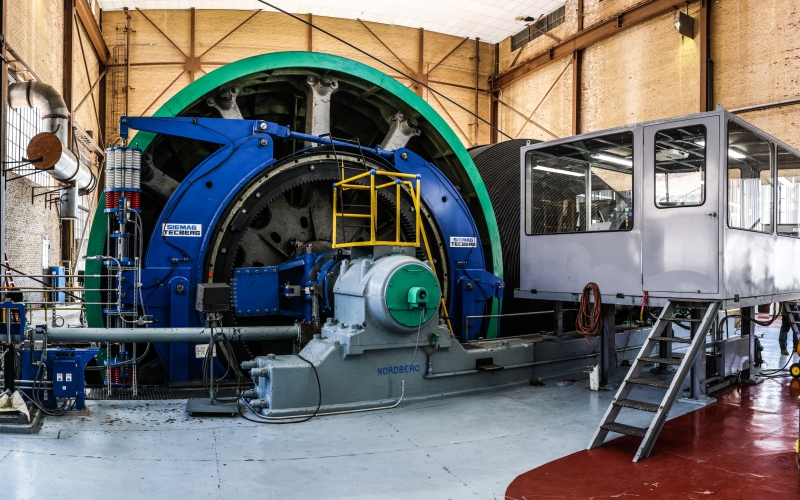 The Ross Hoists, built in the 1930s, receive major upgrades in preparation for LBNF/DUNE construction and operation
Full Details