Geothermal energy has the potential to power 100 million homes in America.
Constance Walter 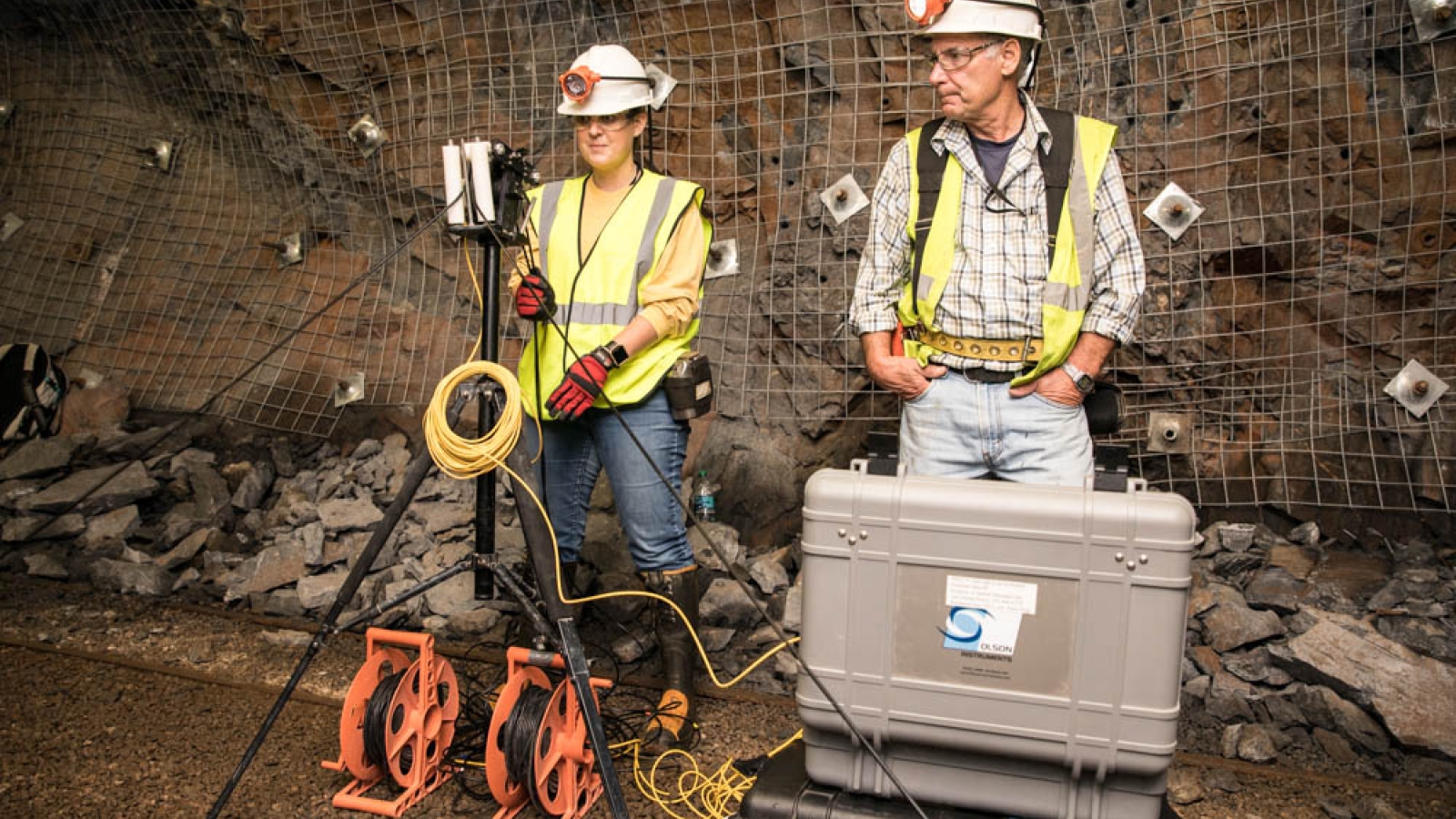 Hunter Knox and Bill Roggenthen from South Dakota School of Mines lower sensors down a set of holes that were drilled for the kISMET experiment.

As a geophysicist, Hunter Knox has worked all over the world testing bridges, dams and levees, and listening to the sounds of the earth. She even peered into the center of the earth from a volcano in Antarctica at an open connecting lake.

Now, the field coordinator from Sandia National Laboratory (SNL), is setting her sights on Sanford Lab’s 4850 Level, where she’s planning the logistics for SIGMA-V, a project under the auspices of the Enhanced Geothermal Systems Collaboration (EGS Collab).

Led by Lawrence Berkeley National Laboratory, the EGS Collab recently received a $9 million grant from the Department of Energy to study geothermal systems. It is believed this clean-energy technology could power up to 100 million American homes.

But before that can happen, more studies need to be done.

“We need to better understand how fractures created in deep, hard-rock environments can be used to produce geothermal energy,” Knox said.

Building on data collected from the recent kISMET experiment at Sanford Lab, the collaboration hopes to expand its understanding of the rock stress and incorporate additional equipment to meet the needs of EGS technology.

“A typical geothermal system mines heat from the earth by extracting steam or hot water,” said Tim Kneafsey, principal investigator for EGS Collab and a staff earth scientist with LBNL. But for that to happen, three things are needed: hot rock, fluid and the ability for fluid to move through rock.

“These conditions are not met everywhere,” Kneafsey said. “There is a lot of accessible hot rock, but it may be missing the permeability or fluid or both.”

"We know fracturing rock can be done. But can it be effective for geothermal purposes? We need good, well-monitored field tests of fracturing, particularly in crystalline rock, to better understand that,” he said.

That’s where SIGMA-V—or Stimulation Investigations for Geothermal Modeling and Analysis—comes in. “SIGMA-V is shorthand for vertical stress,” Kneafsey said.

The goal of the project is to collect data that will allow the team to create better predictive and geomechanic models that will allow them to better understand the subsurface of the earth. The team will drill two boreholes: one for injection and one for production. Each will be 60 meters long in the direction of the minimum horizontal stress. Six additional monitoring boreholes will contain seismic, electrical and fiber optic sensors.

When the holes are drilled, the team will place “straddle packers”—a mandrel, or pipe, with two deflated balloons on either end—inside them. Once inside, they will inflate the balloons and flow water down the pipe to create an airtight section. They will continue to pump water until the rock fractures and use the monitoring equipment to listen for acoustic emissions, the sounds that will tell them what is happening within the rock.

And so, she’ll continue to listen to the rock nearly a mile underground and, perhaps, learn the secret to using it for geothermal energy.

The two FORGE sites are in Fallon, Nevada, which is led by Sandia National Laboratories; and Milford, Utah, led by the University of Utah. The FORGE initiative will include innovative drilling techniques, reservoir stimulation techniques and well connectivity and flow-testing efforts.

Some information for this article was provided by LBNL: http://newscenter.lbl.gov/2017/07/20/berkeley-lab-lead-multimillion-dollar-geothermal-energy-project/

DOE’s Office of Science is the single largest supporter of basic research in the physical sciences in the United States, and is working to address some of the most pressing challenges of our time. For more information, please visit science.energy.gov.