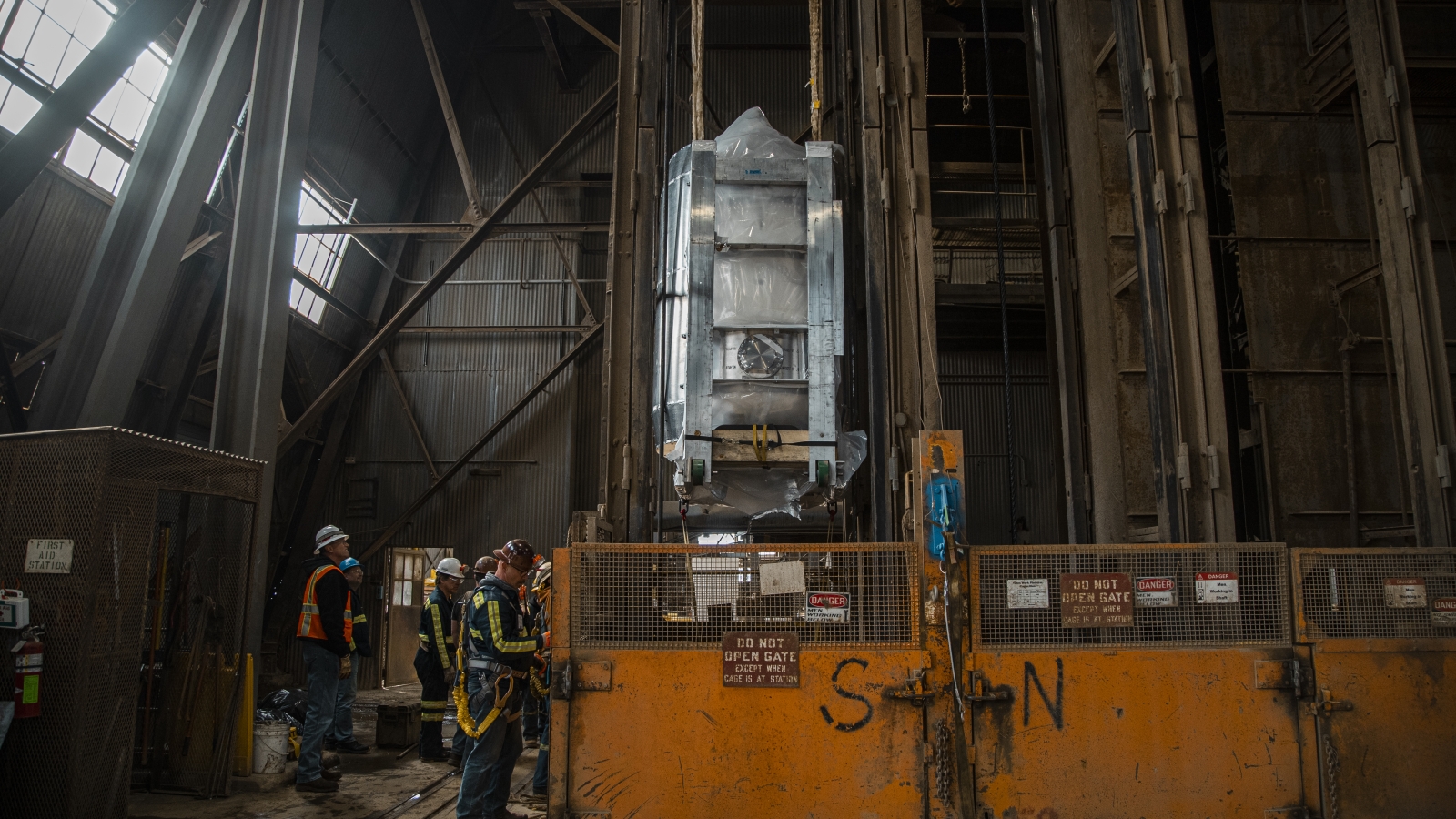 Crews at the Sanford Underground Research Laboratory in Lead, South Dakota, begin to lower the LUX-ZEPLIN central detector. Its nearly mile-long descent down an elevator shaft, and its delivery to a research cavern where it will hunt for dark matter, were successfully carried out last week.

On October 21, dark matter researchers across the globe tapped their Slack notifications “on.” Members of the LUX-ZEPLIN (LZ) collaboration, from the United Kingdom to the coast of California, tuned in to the experiment’s work channels to receive news from the small mountain town of Lead, South Dakota.

Just a fraction of the LZ collaboration’s 250 researchers were onsite at Sanford Underground Research Facility (Sanford Lab), but each member was eager for updates on the day’s task: moving LZ’s 5,000-pound, 9-foot-tall inner detector nearly a mile underground.

Since 2018, LZ’s onsite crews have been split between surface and underground operations. The surface team worked in a class-100 cleanroom, donning head-to-toe Tyvek suits and assembling the heart of the LZ experiment, the inner detector. Underground, another crew has been outfitting a custom-built research cavern with systems that will support LZ’s search for dark matter.

Last week, it was time to bring the detector underground.

This was a high-stakes move for the collaboration; it required transporting the detector from the cleanroom to the Yates Headframe, down a mile-deep shaft and through a narrow drift on the 4850 Level, all without damaging or dirtying the detector.

“This was the most challenging move of a detector system that I have ever done in decades of working on experiments,” said Jeff Cherwinka, the LZ chief engineer from the University of Wisconsin, who led the planning effort for the move along with SURF engineers and other support.

The move had been meticulously planned by LZ researchers and Sanford Lab staff. Each step was anticipated. Tight spaces were engineered to the inch. The entire operation had even been practiced with a model cryostat the week before.

"We've planned this detector move for several months, including practice runs and fit checks to ensure everything worked flawlessly," said Mike Headley, executive director of the South Dakota Science and Technology Authority (SDSTA). "The LZ/SDSTA team's attention to the smallest details and teamwork made this event an amazing success for the future of dark matter research at SURF. I'm incredibly proud of our SDSTA staff and our partnership with the LZ Collaboration."

Theresa Fruth, a postdoctoral research fellow at University College London who works on LZ’s central detector, said that keeping LZ well-sealed from any contaminants during its journey was a high priority – even the slightest traces of dust and dirt could ultimately affect its measurements.

“From a science perspective, we wanted the detector to come down exactly as it was on the surface,” she said. “The structural integrity is incredibly important, but so is the cleanliness, because we've been building this detector for 10 months in a cleanroom.”

After months of strict cleanliness protocols, researchers posed for photos in the now vacant cleanroom, atypically dressed in plain clothes and snow boots.

Outside the cleanroom, a forklift carried the detector through the yard to the Yates Headframe. The trip resembled a procession, as researchers and engineers who had worked for months to create this instrument walked alongside the detector, escorting it to the headframe.

“For some people who've spent a lot of time in the cleanroom, it's quite emotional because it's the end of the work there,” said Fruth.

In the headframe, engineers attached the detector to the underside of the cage with slings and straps.

“Prior to rigging the detector under the cage, we did tests with other cranes to see how it would react when suspended,” said Jake Davis, a Sanford Lab mechanical engineer who worked on the cryostat move. “We also completed analysis and testing to ensure it would remain nice and straight in the shaft.”

During the descent, researchers were left waiting. The last image that had been sent out was that of the detector suspended over the top of the mile-deep shaft.

When it reached the 4850 Level, the detector was detached from the elevator cage. Crews pushed the detector through the drift using air skates on a temporarily assembled surface.

Finally, a nigh-heroic image of researchers beside the detector in the Davis Cavern was shared.

“It is extremely gratifying to see it … holding the heart of the experiment and resting in its final place in the Davis Campus, one mile underground,” said Pawel Majewski of the Rutherford Appleton Laboratory in the U.K., who led the design, fabrication, cleaning, and delivery of LZ’s inner cryostat vessel for the U.K. Science and Technology Facilities Council.

“Next, the cryostat will be wrapped with multiple layers of insulation, and a few other exterior components will be installed,” said Murdock “Gil” Gilchriese, LZ project director and a physicist at Lawrence Berkeley National Laboratory (Berkeley Lab). Berkeley Lab is the lead institution for the LZ project.

“Then it will get lowered into the outer cryostat vessel,” he added. “It will take months to hook up and check out all of the cables and make everything vacuum-tight.” Most of the LZ work is now concentrated underground, he said, with multiple work shifts scheduled to complete LZ assembly and installation.

There are plans to begin testing the process of liquefying xenon gas for LZ in November using a mock cryostat, and to fill the actual cryostat with xenon in spring 2020. Project completion could come as soon as July 2020, Gilchriese said.