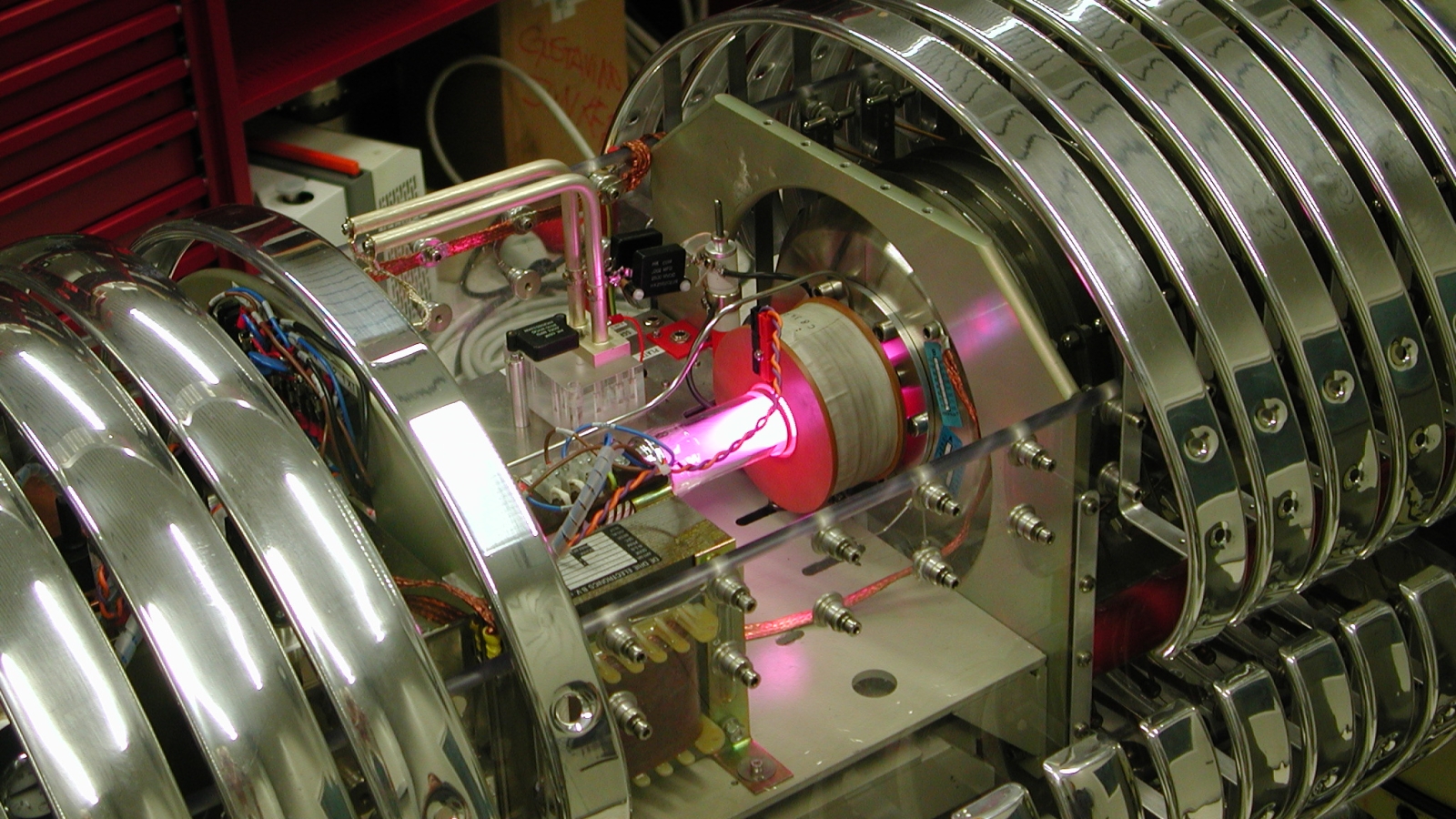 Hydrogen plasma glows at the ion source of the LUNA accelerator. The plasma is needed to extract and accelerate protons.
LUNA experiment

As a young man, Frank Strieder was fascinated with astrophysics, reading every book he could find and taking high-level courses in math and physics while in high school in Germany. One day in particular stands out.

"My teacher said, 'Ah, but neutrinos have never been measured from the sun.' I said, 'No, no, no. There's an experiment by Ray Davis somewhere in the United States at an underground gold mine.' And the teacher said, 'No, that is not the case,'" said Strieder, associate professor of physics at the South Dakota School of Mines and Technology (SD Mines).

"Now, almost 30 years later, I'm at that same place doing my own experiment in the same environment," said Strieder, who is also the principal investigator for CASPAR (Compact Accelerator System for Performing Astrophysical Research) at Sanford Lab.

For nearly three decades, Davis counted solar neutrinos on the 4850 Level of the former Homestake Mine. But there was a problem. Davis consistently counted only one-third the number of neutrinos predicted by theorists, creating what came to be called the "solar neutrino problem."

Initially, the scientific community thought the experiment must be wrong, but Davis insisted he was right. He was vindicated when two underground experiments in Canada and Japan showed that neutrinos oscillate, or change among three types, as they travel through space at nearly the speed of light. In 2002, Davis earned a share of the Nobel Prize in Physics.

But even before the Nobel, Davis's work inspired experiments around the world, including the Laboratory for Underground Nuclear Astrophysics (LUNA) at Gran Sasso National Laboratory in Italy. The first underground accelerator for astrophysics, LUNA has been looking at stellar nuclear burning in the sun for 25 years.

"Ray Davis used neutrinos as spies of the sun, to try to prove what was happening in the sun," said Matthias Junker, a scientist with the LUNA collaboration. "As we have fixed our idea of what is a neutrino, we can use it to probe what is going on inside the sun."

Strieder worked with Junker on the LUNA experiment for 22 years before moving to CASPAR two years ago. Although both experiments are studying stellar burning and evolutionary phases in stars, their work is different. CASPAR is interested in understanding the production of elements heavier than iron, while LUNA concentrates on the production of elements up to magnesium, aluminum and others in that area.

"This nuclear burning produces all the isotopes that make up life," Junker said. "Where does carbon come from" Oxygen? Nitrogen? Lead? Gold? It's all produced within stars. If you have a better understanding of the stars, you can use them to probe the universe."

LUNA and CASPAR are the only experiments doing this type of research, Junker said. "Of course, there is competition but there is also sharing knowledge and experience."

And it all started with neutrinos and the pioneering work done by Ray Davis.

On a recent visit to Sanford Lab, Junker said, "For me, this moment is extremely thrilling. This is the root of neutrino research."