The nuts and bolts of experimental science 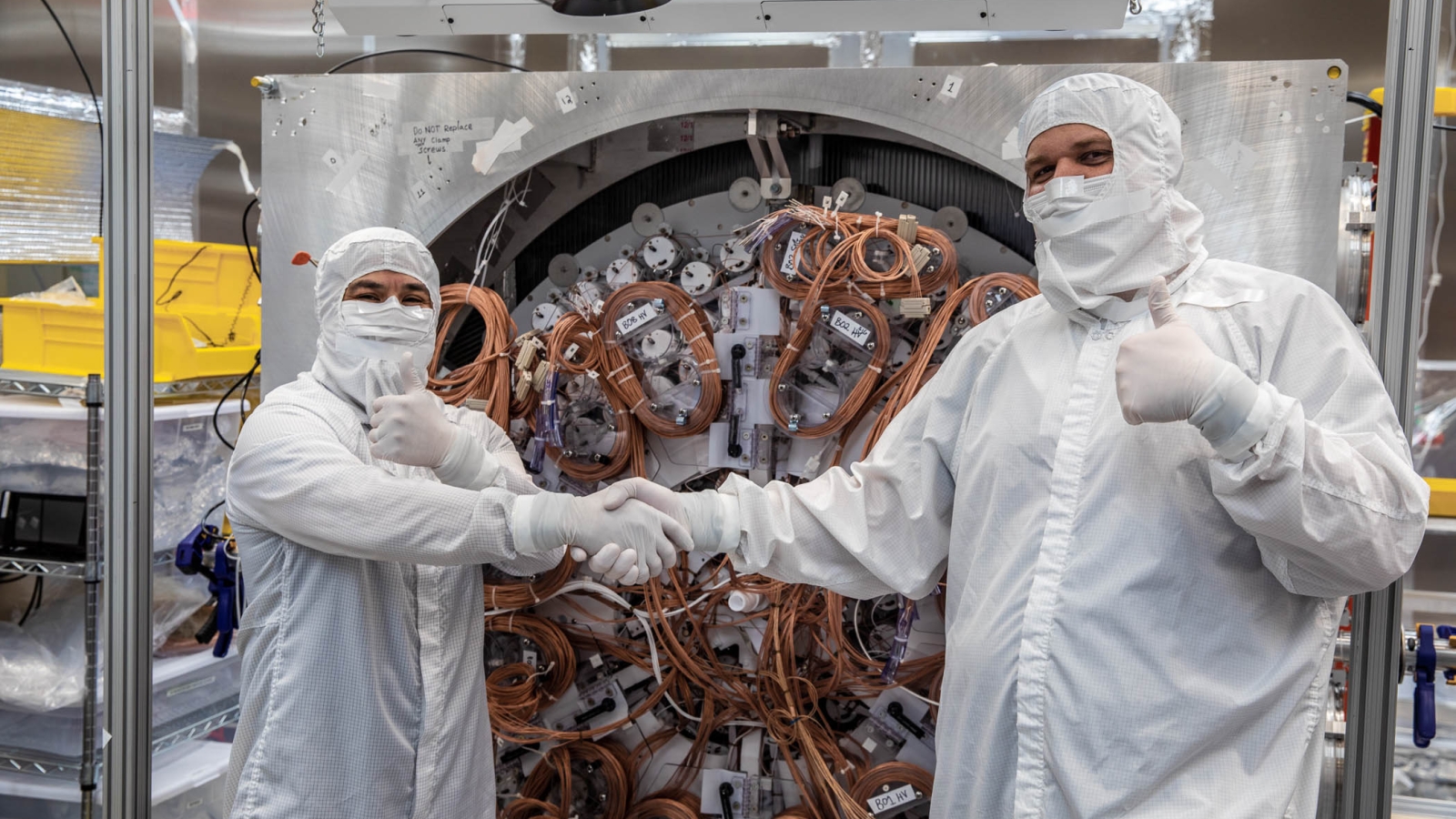 The challenge of experimental science is this: Build machines capable of testing abstract theories. To test a theory, collaborations must distill models of universal proportions into tangible nuts and bolts, twisting them into functional machines. This process demands the abstract realm of physics and the practical world of engineering to meet.

Engineers at the Sanford Underground Research Facility (Sanford Lab), whether working directly with experiments or bolstering the facility itself, are a much-needed link between scientific theory and function.

The first of its kind

Over the past year, Derek Lucero transitioned from labor-intensive work in the Ross Shaft to assembling the pieces of a highly intricate experiment. For the last 10 months, Lucero and Jeff Barthel, both engineering technical associates, provided engineering support to the LUX-ZEPLIN (LZ) dark matter collaboration during the assembly of the innermost piece of the experiment, the Time Projection Chamber (TPC), in a class-100 cleanroom.

“Trust me, there are no instruction manuals for this type of work,” Lucero said. That’s because each of the TPC’s tens of thousands of components were specifically designed and fabricated for this experiment by institutions around the world. To assemble these components, physicists and engineers converged to properly address the mechanical, optical, electrical, background and cleanliness requirements for each piece.

“From providing supplies to fine precision work on the innards of the LZ detector itself, the engineers have machined parts for both the underground circulation system as well as the xenon detector,” said Tomasz Biesiadzinski, a project scientist with SLAC National Accelerator Laboratory who has led the assembly effort at Sanford Lab. “They’re also the ones we rely on to connect fine circuits, fix fragile cables and install delicate detector components that would drive anyone else crazy.”

Each day, the team met to discuss the multidimensional work before donning full-body Tyvek suits and gloves to enter the cleanroom. “As an engineer, I typically want to find solutions as quickly and efficiently as possible,” Lucero said. “Physicists, I’ve learned, approach things more cautiously, coming at the problem from every angle. This is good, because we’ve only got one shot at this. We work together to find that middle ground between thought and action.”

“It's two different philosophies,” said Allan Stratman, director of engineering at Sanford Lab. “Engineers want to eliminate ambiguity. We like things black and white. We see problems and want to solve them. Physicists, though, are doing theoretical work, so they thrive on ambiguity and need as much flexibility as we can afford. With the reality of the experiment coming online, those philosophies meet to make it happen and make it right.”

The novel solutions these differing mindsets settled on led to the completion of the TPC, which will soon move to the 4850 Level, where another team of engineers has been preparing the Davis Cavern to receive it.

For the time being, engineers typically outnumber physicists in the Davis Cavern. At first glance, however, you’d have difficulty telling them apart. Physicists work alongside engineers to install subsystems and structural support, including the cryogenics system and extensive cabling.

“Many of the researchers don’t have backgrounds turning wrenches, running drills or cutting steel,” said Dale Curran, engineering technical associate. “I think it's good when they have an opportunity to be onsite and do hands-on work. After this is done, it’ll be a waiting-game for half a decade as the detector collects data.”

"The engineering team is crucial for us,” said David Woodward, a post-doctoral researcher who spent several months working with engineers to install the test cryostat for the circulation system commissioning. “They not only help us get things done, but they improve the quality of our work by filling in the gaps with their considerable skills and knowledge."

The learning curve goes both ways, as engineers get the chance to brush up on dark matter physics, as well.

“The big takeaway for me is that it's about noise cancelation,” Curran said. “We are looking for something that is very obscure and difficult to find—something you need to discern from a billion other things. Imagine being at a rock concert, trying to listen for a pin to drop. That’s the background on the surface of the earth. On the 4850 Level, it's goes from sounding like a rock concert, to listening to the radio in your car. Here, you still have to discern from smaller backgrounds—the drums, the guitar strums, the singing voices—until you think you’ve heard the pin hitting the floor. Then, you’ve got to prove that’s really what you heard.”

“We also provide a level of institutional memory,” Barthel said. While collaboration members visit the facility when their subsystem is ready to be installed, engineers “are here every day and our team rarely changes, giving the process much-needed continuity.”

Ship in a bottle

Just down the drift from the Davis Cavern’s dark matter hunt, geotechnical engineer David Vardiman is helping to prepare a space for the largest physics experiment on United States soil—or, more accurately, under it.

“We often say we are building a ship in a bottle,” said Vardiman, who is helping prepare for excavation for the Long Baseline Neutrino Facility (LBNF). “Except the neck of this bottle is 5,000 feet long.”

LBNF will house the Deep Underground Neutrino Experiment’s (DUNE) Far Detector on the 4850 Level in Sanford Lab, as well as the much smaller near detector at Fermilab. The DUNE detectors require intricate cryogenic technology to keep them at their operating temperature of minus 300 degrees Fahrenheit. Over the next few years, about 800,000 tons of rock will be excavated at Sanford Lab to house the detector and its complex systems.

“The most important aspect of planning is listening to a scientist’s requirements,” Vardiman said. “Not everyone understands the vagaries of the rock—they may not realize how important a specification is. As an engineer, I have to help them verbalize all that they need. If not, we could miss out on an important detection requirement, all because we failed to pay attention.”

Some engineers have little direct interaction with experiments, but their work is nonetheless critical to the facility. Physical infrastructure projects include strengthening the Ross Shaft Headframe, providing engineering support to the Underground Maintenance Crew and Wastewater Treatment Plant.

A new twist on traditional engineering

Engineers at Sanford Lab come from varied backgrounds, from the largest machine tool builder in the western world to the production of roofing materials, to mining engineering to auto shop owner. For them, these tasks are simply novel approaches to familiar work.

“I think our previous experience translates well into this facility,” said Jacob Davis, a mechanical engineer. His previous experience with cranes and rigging was called upon when layers of the LZ TPC needed to be stacked inside the cleanroom. “These were critical lifts. For some of them, there was a crowd of researchers looking from outside the window. One time, a researcher told me just how much the pieces in the lift cost. Regardless of the price tag on the object, though, I do the work the same. Whether it's 10 dollars or 20 million dollars—it’s important to do it right.”

Whether working in a cleanroom to build a sensitive detector, readying a cavern for new science or supporting the physical infrastructure of the facility, at the end of the day, the engineers are solving problems.

“Because these problems have never been solved before, our engineers are fabricating completely new solutions,” Stratman said. “As a geek engineer, that’s pretty amazing to me. We are engineering for the sake of science; our end goal is to provide exactly the solutions scientists need.”