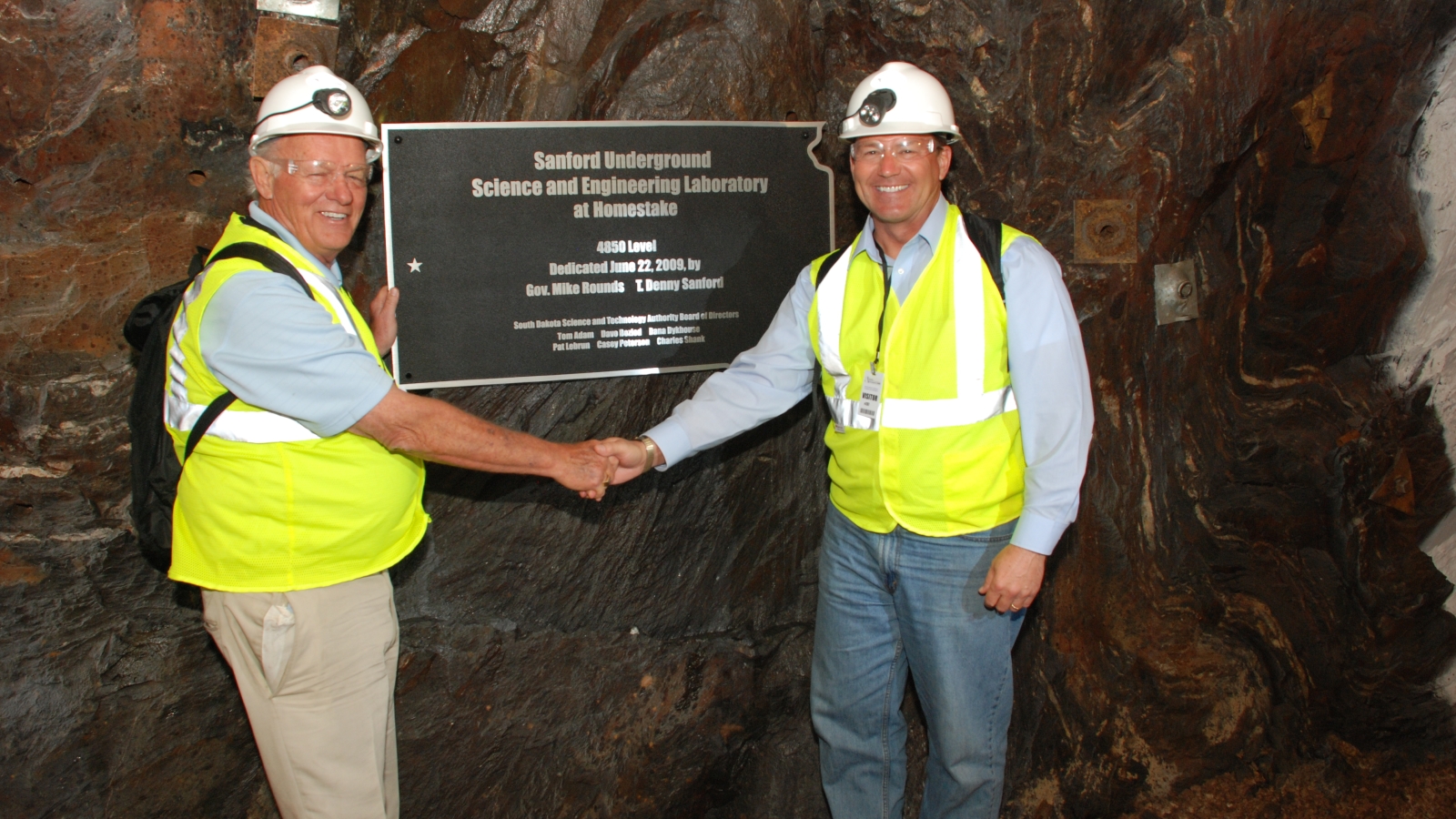 The ceremony was in a large tunnel—14 feet wide by 14 feet tall—that connects the Ross and Yates shafts on the 4850 Level of Sanford Lab. The guests wore hardhats and mine lamps, but the tunnel (a "drift" in mine parlance) was lit, the temperature was 70 degrees and there was a steady breeze thanks to a large exhaust fan on the surface.

The "ribbon cutting" was done in the style of hard-rock mining. Former Homestake gold miners Bill Heisinger and Alvin Burns used a traditional jackleg drill to punch holes into the wall of a tunnel. Then Gov. Rounds and Mr. Sanford lifted into place a plaque dedicating the Sanford Underground Laboratory at Homestake.

Deep laboratories protect sensitive experiments, such as neutrino detectors, from cosmic radiation, and underground lab space is at a premium throughout the world. Rounds cited three "catalysts" that led to converting this closed gold mine into a deep underground laboratory. "The first, of course, was the donation of the Homestake Mine to South Dakota by the Barrick Corporation," the Governor said.

The second catalyst was the South Dakota Legislature's approval to spend $34.2 million to reopen the facility.

The third catalyst was a $70 million donation by Mr. T. Denny Sanford, a Sioux Falls businessman and philanthropist. Mr. Sanford's gift included $20 million for a Sanford Science Education Center at the laboratory. "Thank you very much Denny for everything you are doing for underground science and science education," the Governor said.

Sanford credited the Governor and the Sanford Lab staff. "I'm just absolutely thrilled to be here," he said. Sanford's pledge of $70 million came in 2006, but it was contingent upon the National Science Foundation choosing Homestake as its preferred site for a proposed national underground laboratory. The NSF did that on July 10, 2007. "That was the trigger for me," Sanford said.

A group of about 30 guests—including the Governor, Mr. Sanford and reporters—descended the Ross Shaft to the 4850 Level, riding inside a steel elevator car called a "cage."

The descent took about 10 minutes, but it would have been impossible six weeks ago. Until May 13, the 4850 Level was under water. The mine had been slowly filling with water until last year, when the South Dakota Science and Technology Authority (SDSTA) began pumping it out, in preparation for building the Sanford Lab. The high-water mark was 4,530 feet underground. The water level has been lowered 426 feet since then, to 106 feet below the 4850 Level.

The SDSTA will reopen the facility to the 4850 Level for at least two physics experiments. The Large Underground Xenon detector, or LUX, will look for an exotic, yet-to-be-detected substance called "dark matter." The Majorana Demonstrator (pronounced: Mah-yo-RA-nah) will look for an extremely rare phenomenon called "neutrinoless double-beta decay." Both experiments could lead to profound discoveries about the nature of the universe.

Meanwhile, the National Science Foundation (NSF) is actively developing an even larger proposal to make the Sanford Lab a national underground laboratory. Dr. Kevin Lesko of Lawrence Berkeley National Laboratory and the University of California at Berkeley is leading a nationwide team of scientists working on that proposal. "The establishment of the Sanford Lab today is an important step in achieving the deep underground laboratory many of us have sought in the past decade," Lesko said. "It re-establishes significant physics experiments in Homestake along with earth science experiments while we develop the proposal for the national facility."

The ceremony Monday morning was held about a kilometer from the historic Davis Cavern, also on the 4850 Level. In 1965, Dr. Ray Davis installed an experiment there to detect subatomic particles called neutrinos. He went on to share the Nobel Prize for Physics in 2002 for that work.

This year, researchers hope to install the LUX in the Davis Cavern. Dr. Rick Gaitskell is the lead scientist of the dark matter experiment. He said Monday that his team would install a surface facility in a former Homestake warehouse this fall, but the real work will be underground.  "I cannot express in words my excitement that we are back here at 4850, in a position to start doing excellent science," Gaitskell said. The LUX experiment will be installed in the Davis Cavern.

Rounds emphasized that progress at the Sanford Lab also was due to sustained efforts by hundreds of people. "Over the last eight years, local and state government leaders, former Homestake miners, our Congressional delegation, universities here and throughout the United States and the world, federal government agencies and many more people and groups have joined together to create the underground science opportunities that are now starting to happen here," he said.

SDSTA Executive Director Ron Wheeler gave special credit to former Homestake workers—like Heisinger and Burns—who have brought decades of experience to the staff of the Sanford Lab. "It's amazing to think that a month and a half ago all of this was under water," Wheeler said. "It shows you what the crews here have been able to do in the last year or so since we began pumping."

Wheeler, Rounds, Lesko and others also thanked Barrick Gold Corp., which donated the Homestake gold mine to South Dakota in 2006. Dr. Ken Lande, a University of Pennsylvania physicist who worked with Davis for decades on the Homestake neutrino experiment, returned to the 4850 Level for the dedication. Dr. Lande said Homestake was a friend to science even back in 1965, when Davis installed his detector. "It was an amazing exercise for Homestake to say, Yes, we'd like to have you here. You're welcome."