On May 30, 2012, the Davis Campus on the 4850 Level of SURF was dedicated to scientific inquiry
Erin Lorraine Broberg 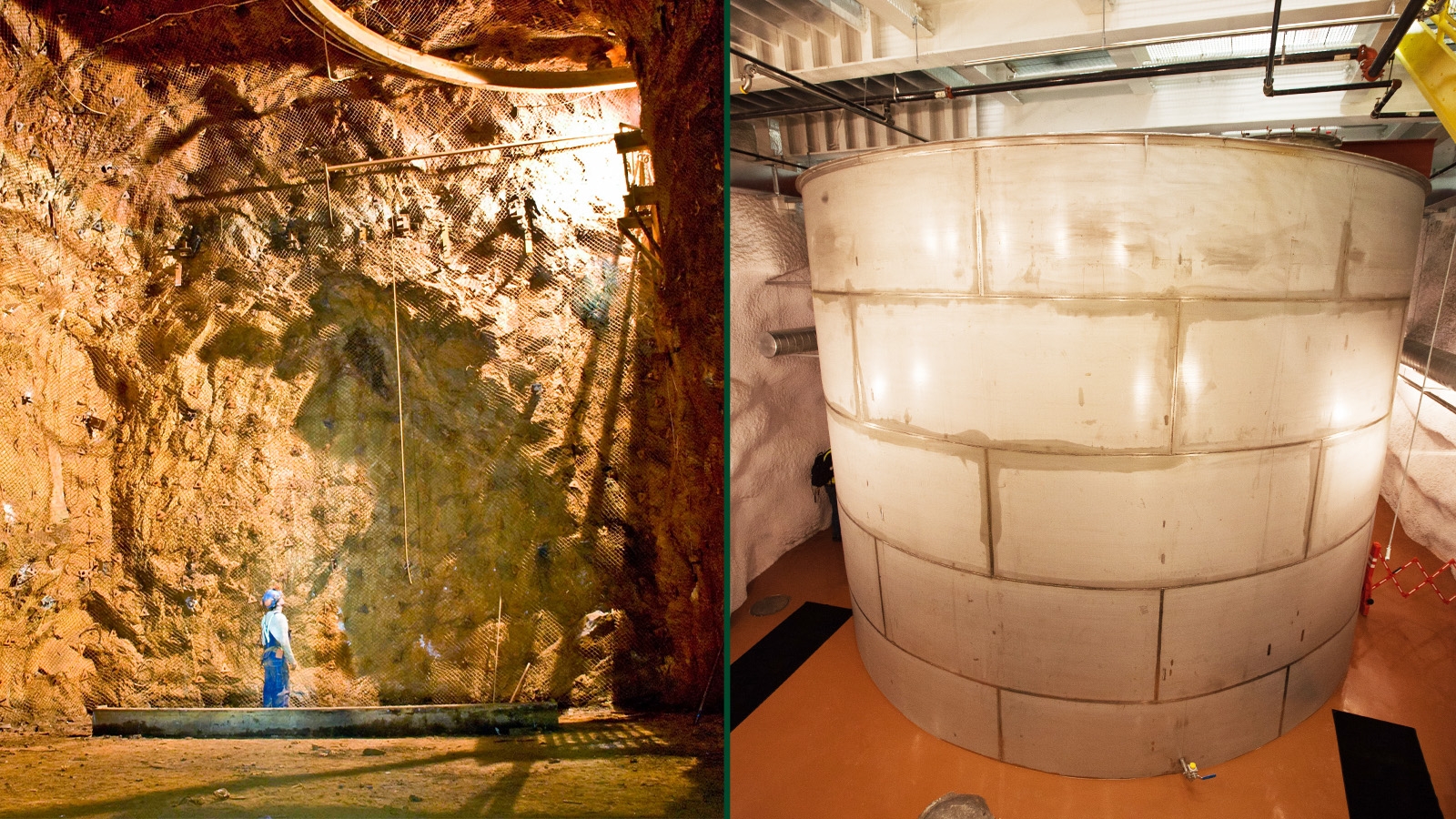 Left: The Davis Cavern during the construction phase. Right: The water tank, which holds the dark matter experiment, in the completed Davis Cavern.

In 2004, a small team in Lead, South Dakota, set an audacious goal: build a world-class science laboratory 4,580 feet underground in a former gold mine.

The South Dakota Science and Technology Authority (SDSTA) was tasked with creating the Sanford Underground Research Facility (SURF) in the former Homestake Gold Mine (Homestake). The vision—a deep underground research facility where nearly a mile of rock would shield sensitive particle physics experiments from cosmic rays—was the brainchild of several physicists. The location seemed ideal for such a laboratory. After all, Homestake had once been the home to Dr. Raymond Davis Jr.’s Solar Neutrino Experiment.

What made this undertaking so daunting, however, was the current state of the proposed space. Homestake ceased operations in 2001. In 2003, the dewatering pumps were turned off. Ground water steadily rose, eventually submerging the 4850 Level for more than a year.

In 2009, William McElroy, the construction project manager, was with the first crew to step foot on the level after it was dewatered. The crew walked the half mile from the Ross Station to the cavern where the laboratory space would be built. McElroy described the experience: “I had water spilling over my boots. Debris was floating here and there. Things were floating right by us. The walls were caked with a heavy iron oxide deposit.” McElroy also saw what wasn’tthere. No lights. No electricity. No clear travel routes. No existing infrastructure.

This was the spot they intended to build a laboratory space with less than one particle of dust per 1,000 cubic foot? This is where researchers wanted to host the world’s most sensitive particle detectors? At a recent celebration of the 10-year anniversary of the Davis Campus, McElroy recalled thinking, “I’m all for a challenge, but this, this is big.”

From mud and muck to a world-class laboratory

The SDSTA assembled a team of those most familiar with the facility: former Homestake miners. With their knowledge of the facility and expertise in hard-rock environments, the team headed back underground.

First, the 4850 Level needed infrastructure. Crews drained the level of remaining water; secured the drifts and caverns with ground support; established proper ventilation; cleared travel routes; and installed rail for locomotive travel. The crew excavated 18,000 tons of rock to expand the laboratory cavern and add space for a utility cavern.

Some of the work was familiar to the team of former miners; other parts had a learning curve.

“We had to adjust from the mining standards—get in, make the ground safe for the time you're working in the cavern, get the ore, then get out—to a new standard,” McElroy said. “This new standard was to ensure the campus would be safe and secure to work in for 50 years. It was an education for all of us.”

The enormous underground effort had lots of support “up top.” The SDSTA had established a board of directors and the SURF team was steadily growing, adding jobs for hoist operations, shaft and facility maintenance, project management, business, administration, as well as science education and outreach. Contractors, most from South Dakota, provided support and expertise to tackle some of the special construction requirements. And the project was made possible through a generous donation from T. Denny Sanford, a land donation from Barrick Gold Corporation, and the support of South Dakota governors and lawmakers, including Senator Mike Rounds.

“This was an exciting time and a proud moment for South Dakota,” said Mike Headley, executive director of the SDSTA, at the 2022 celebration. “We couldn’t have achieved any piece of this undertaking without the confidence, vision and investment of our partners and stakeholders.”

Perhaps most importantly, scientists from around the world had committed to hosting their experiments at the future lab.

“Without world-class scientists and world-class science at SURF—especially in the early days when we were just getting our feet under ourselves—we would absolutely not be here today,” said Jaret Heise, science director at SURF, at the 2022 celebration.

In 2012, the laboratory space was complete. In celebration, the SDSTA held a dedication ceremony on the 4850 Level. At the ceremony, the new laboratory was named the “Davis Campus,” in recognition of Dr. Davis.

For nearly three decades, Davis counted neutrinos from the Sun on the 4850 Level of the Homestake Mine. A chemist from Brookhaven National Laboratory in New York, Davis’ methodic approach to understanding neutrinos forever changed physics and earned Davis a share of the Nobel Prize in Physics. In September 2020, the American Physical Society (APS) designated SURF as a Historic Site in physics, in recognition of the impact of Davis’ research.

“SURF is built on a strong foundation and legacy of compelling and transformational science,” Heise said. “Ray Davis shared in the 2002 Nobel Prize in Physics, and without Ray's literally groundbreaking and pioneering work, we would absolutely not be here today.”

With Davis’ legacy, it was fitting that researchers hoping to solve current mysteries would take their experiments to the same underground cavern. When the Davis Campus was dedicated 10 years ago, scientific collaborations were eager to do just that.

The first experiment to move into the Davis Campus was the Majorana Demonstrator (Majorana). Majorana studies neutrinos, the same strange subatomic particle that Davis studied for decades.

After years of data-taking, the Majorana collaboration showed that it is possible—within a deep underground lab, with extreme cleanliness protocols and with their detector technology—to decrease backgrounds enough to search for a rare particle interaction called “neutrinoless double-beta decay.”

“The Majorana collaboration developed technical advances that are being incorporated into the next generation of experiments—that's how strong the science at SURF is,” Heise said.

Rare event searches like Majorana and LZ don’t just need to be shielded from cosmic rays—they also require some of the world’s cleanest materials. The Davis Campus is home to the Black Hills State University Underground Campus (BHUC). There, low background counters characterize materials intended for ultra-sensitive experiments. With the BHUC, the Davis Campus provides low background counting technology to emerging experiments around the globe.

“The first 10 years of science in the Davis Campus have been amazing,” Heise said. “And I know we’re all very much looking forward to the next ten years.”

Looking to the future

With the vast underground infrastructure at SURF, there’s room for expansion. Excavation is underway on the 4850 Level to create the Long-Baseline Neutrino Facility (LBNF), which will support Fermilab’s Deep Underground Neutrino Experiment (DUNE). There is also potential to go even deeper, building laboratory spaces on the 7400 Level.

Realizing these projects will require a mammoth measure of expertise, effort and ingenuity. But if the story of the Davis Campus is any indication, the SDSTA and its partners are up to the task.