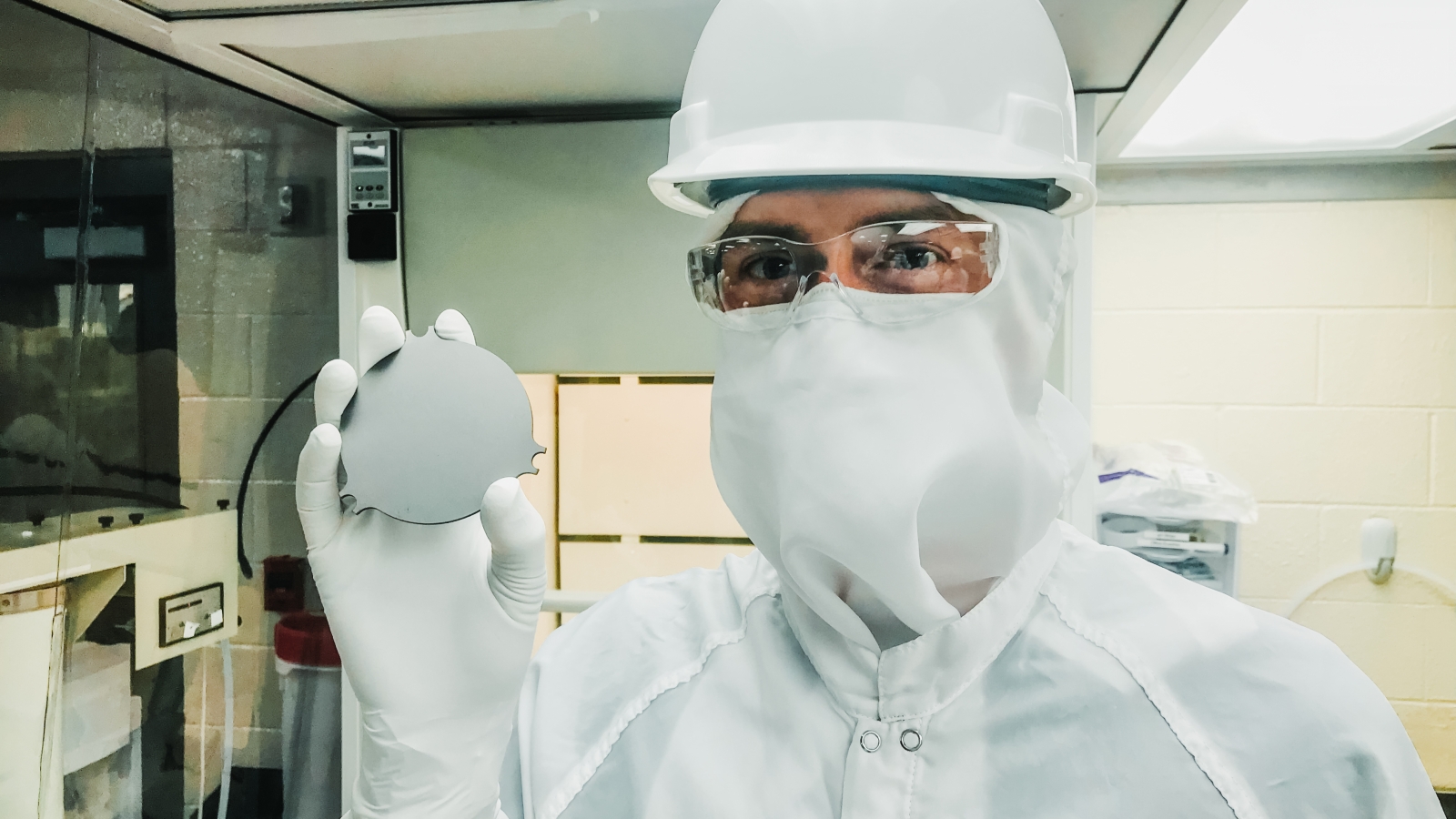 Samuel Meijer, staff scientist at Los Alamos National Laboratory, holds a tantalum plate in a cleanroom on the 4850 Level of Sanford Underground Research Facility, where a new experiment is searching for  the decay of nature’s rarest isotope.

Tantalus, a villainous demigod in Greek mythology, is perhaps best known for his punishment. For his heinous crimes against the Olympic gods, Tantalus was banished to the underworld. There, he was chained in a pool of water. Branches, heavy-laden with fruit, dangled just above his head. If he stooped to slate his thirst, the water at his feet receded. If he reached toward the fruit to satisfy his hunger, the branches recoiled.

The story of Tantalus’s punishment remains with us today in the word “tantalize” and in the name of a rare element formed in the heart of dying stars: tantalum. In a fateful twist, tantalum itself poses a frustrating problem to physicists—one that, until now, has been just out of reach.

For decades, physicists have sought to observe and measure the decay of tantalum-180m, nature’s rarest isotope. The isotope’s dilemma is much like Tantalus’ punishment: tantalum-180m is trapped in a metastable state, bound by a strange, un-intuitive quirk of physics. While theory states that the isotope must eventually decay, that decay has never been observed.

“Nobody has ever seen it; nobody's ever measured it,” said Ralph Massarczyk, staff scientist at Los Alamos National Laboratory (Los Alamos).

For the last several decades, this unobserved decay has dominated the physics community’s discussion of tantalum. “Every nuclear physicist has heard of this problem; it’s an open, standing question,” said Samuel Meijer, also a staff scientist at Los Alamos.

Massarczyk and Meijer are primary investigators, PI and co-PI, respectively, for a new experiment at the Sanford Underground Research Facility (SURF) that may finally measure this elusive decay.

In the atomic world, particles are constantly seeking equilibrium; yet that equilibrium is rarely attained and quickly disrupted.

One case of atomic disruption is when a nucleon—either a proton or neutron in the center of an atom—receives a burst of energy and leaps to a higher, unstable energy level. To regain stasis, the nucleon will immediately decay, falling back to its lower energy level and releasing the excess energy in the form of a gamma ray.

Imagine a playground swing. In its lowest energy state, the swing hangs straight down, resting close to the ground. Now, imagine the swing is pulled back laterally, then released. The swing will sway back and forth, releasing energy through motion until it again hangs straight down. This is how most nucleons decay; they release their energy and return to their ground state.

“But sometimes,” Massarczyk explained, “the nucleon gets stuck.”

In this case, the nucleon is also like a swing pulled back laterally and released. Rather than swinging down, however, it remains where it was held, hovering mid-air, full of unreleased energy. These “stuck” nucleons are held in place by a strange law of physics called “spin-suppression”; isotopes with spin-suppressed nucleons are called “metastable isomers.” Some take several seconds to decay. Others can take years.

Similar to Tantalus’ fate in the underworld, this spin-suppressed state keeps tantalum-180m in its bewildering state for an eternity—well, nearly an eternity. Theory predicts that the half-life of tantalum-180m is between 1017 and 1018years, far longer than the universe itself has existed.

Tantalum-180m’s decay hasn’t been observed, but not for lack of trying. Physicists have tried to increase their sensitivity, or chance of witnessing this extremely rare decay, in two major ways: increasing the number of atoms they monitor and decreasing spurious background signals.

Both methods pose a challenge.

Tantalum is among the rarest elements in the solar system, and the tantalum-180m isotope makes up only 0.012% of naturally occurring tantalum. Additionally, the telltale sign of tantalum-180m’s decay is the release of a gamma ray. In an ultra-sensitive detector, even small amounts of background radiation from the Sun, the atmosphere and dust can overshadow that trace signal.

Previous attempts to observe the decay have come up short. In 2016, researchers in the HADES underground laboratory in Belgium placed 1.5 kilograms of tantalum (containing about 180 milligrams of tantalum-180m) between two high-purity germanium detectors. Then, the collaboration watched and waited 244 days for a signal that never came.

The HADES experiment set the most stringent lower limit on the lifetime of tantalum-180m: 4.5x1016 years. The measurement was at least an order of magnitude away from measuring the decay.

The quietest place on Earth

But now, Massarczyk and Meijer have brought the search to one of the quietest places on Earth: The Majorana Demonstrator.

The Majorana Demonstrator was built to demonstrate technology in the search for a theorized decay that, if it exists, has an even longer half-life than tantalum-180m. The collaboration built their detector with ultra-pure materials, then placed it within layers of shielding in a cleanroom 4,850 feet underground at SURF. There, nearly a mile of rock shields the experiment from cosmic rays from the Sun. After six years of operation, the Majorana Demonstrator proved their technology and paved the way for a next-generation experiment.

As the Majorana Demonstrator’s science run drew to a close, Massarczyk and Meijer proposed that the world-class detector and lab space be repurposed to finally measure the decay of nature’s rarest isotope.

“Compared to the HADES experiment, we have more than ten times the tantalum mass,” Meijer said. “We also have an array of 23 detectors, compared to the 2 detectors used previously. This gives us a higher measurement efficiency, and we are more likely to see the signature gamma rays that come off the tantalum-180m. While the HADES group did a great job making a sensitive measurement, the low-background array of the Majorana Demonstrator allows us to be highly effective for these kinds of measurements.”

“We could not have done this without the collaboration’s efforts,” Massarczyk said. “Because of all the work that Majorana Demonstrator had already done, and with the support of Los Alamos’ lab-directed research and development program, we were able to create this new experiment with minimal effort and minimal cost.”

If all goes to plan, the new experiment will measure the half-life of tantalum-180m to 1019 years, an order of magnitude beyond its predicted half-life.

“Within a year, we expect to completely cover the theoretical prediction,” Meijer said.

If the theoretical prediction is correct, the experiment will finally witness a decay of tantalum-180m. Beyond settling a decades-old search, a better understanding of the decay process could be exploited to search for dark matter.

If, however, the theoretical prediction is wrong, a discovery will still be made.

“If the prediction is wrong, that’s still exciting, because it points us in a new direction. In some sense, you can’t really lose by trying to make this measurement with this setup,” Meijer said. “We know that we will measure something interesting, regardless of what happens.” 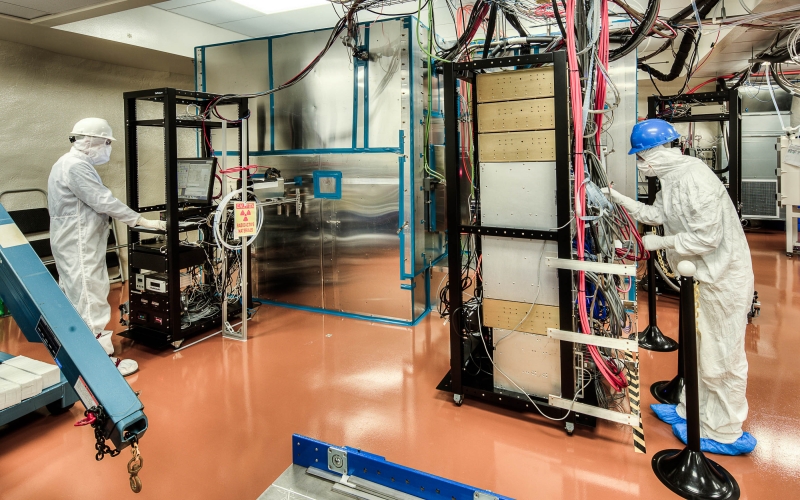 The Majorana Demonstrator is looking for a rare form of decay called neutrinoless double-beta decay. If they find it, it could tell us why matter exists.