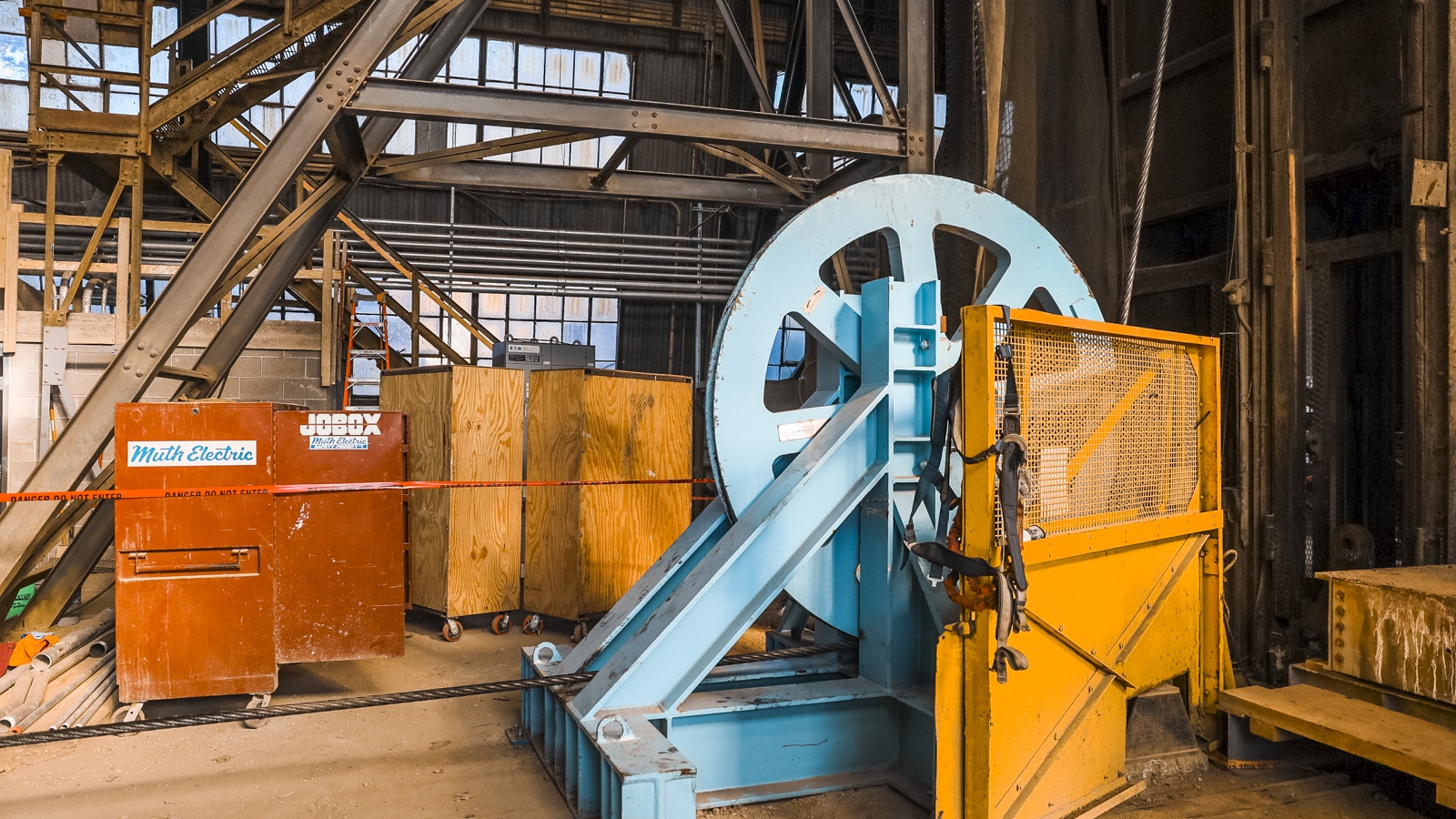 A wheel directs new thick steel cable, or "rope," as it is installed in the Ross Shaft cage compartment.

Another series of upgrades to the Ross Shaft is underway at the Sanford Underground Research Facility (SURF). Crews are working to outfit the shaft with new cage and skip conveyances and have replaced thousands of feet of hoist cables.

These efforts are part of the Ross Shaft rehabilitation project, a complete overhaul of the shaft that began in 2012. The work prepares the Ross Shaft for its role as the main travel way for upcoming excavation and construction of the Long-Baseline Neutrino Facility (LBNF) to support the Deep Underground Neutrino Experiment (DUNE). DUNE, the world’s flagship neutrino experiment, is hosted by Fermi National Accelerator Laboratory (Fermilab) with locations at Fermilab and underground at SURF.

“The Ross Shaft will be critical to each phase of LBNF/DUNE construction, as well as the long-term operation of the experiment,” said Christopher Mossey, Fermilab deputy director for LBNF/DUNE-US.

The Ross Shaft is the main highway to the underground for LBNF and DUNE. On this highway are two lanes, the cage and the skip compartments, that will be heavily traversed in the coming years. Now, SURF crews are working to install new conveyances in each of these compartments.

“These skips are similar to those used for mining purposes,” said Fermilab’s Syd DeVries, LBNF project engineer for Far Site building and site infrastructure. “Only, these will be used to haul waste rock, instead of ore.”

The cage compartment functions much like an elevator, delivering people and materials to different levels of the facility. The newly fabricated cage resembles a traditional mining conveyance but has special design features to better facilitate DUNE construction, including higher ceilings and increased payload capacity.

“When designing the cage, we spent a long time considering how to fit some of the key components of DUNE. Although some large loads will still need to be slung beneath the cage for transport, this cage design will help us fit more loads inside the conveyance itself,” DeVries said.

Previously, both the skip and cage compartments housed work deck conveyances, which crews used as they rehabilitated the shaft’s steel infrastructure. Replacing the work decks with new skips and a cage marks a significant pivot in the project, as crews begin to transition from working on the shaft, to operating the shaft for the construction of DUNE.

In early November, SURF crews worked with the Fortis Mining Engineering & Manufacturing company to replace the entire length of the steel cables, traditionally called “ropes,” in the cage compartment of the Ross Shaft. During a multi-day undertaking, travel ceased in the Ross Shaft as crews removed the old ropes, then installed 12,200 feet of 1 5/8-inch diameter thick steel rope, weighing nearly 28 tons.

The previous ropes had been in use since the final days of Homestake Gold Mine and were still in working condition when they were replaced. During routine maintenance, end segments where ropes receive the most wear are removed for testing; each time a segment is removed, the rope is shortened, until the conveyances can no longer efficiently reach the lowest levels of the facility. Thus, before DUNE construction could begin in earnest, new ropes had to be installed.

Decades of work near completion

More upgrades must be completed before the Ross Shaft is certified and commissioned for use with the DUNE project, including major mechanical and electrical improvements to the Ross hoists, said Syd DeVries.

Since work on the Ross Shaft began in 2012, crews have upgraded, replaced or reinforced nearly every feature of the Ross Complex. From the entire reconstruction of shaft steel structure; the reopening of rock passes, the reinforcement of the headframe; the rope, cage and skips replacement; the upgrades to the Ross crusher; and the rebuilding of the tramway and conveyor system—this effort has transformed every facet of the Ross Complex in preparation for LBNF/DUNE.

“It's been a great partnership,” Mossey said. “Everyone continues to pull together and push the work forward, all with the additional challenge of operating in a COVID-impacted environment.”