Who do you call when there’s something wrong with your experiment? 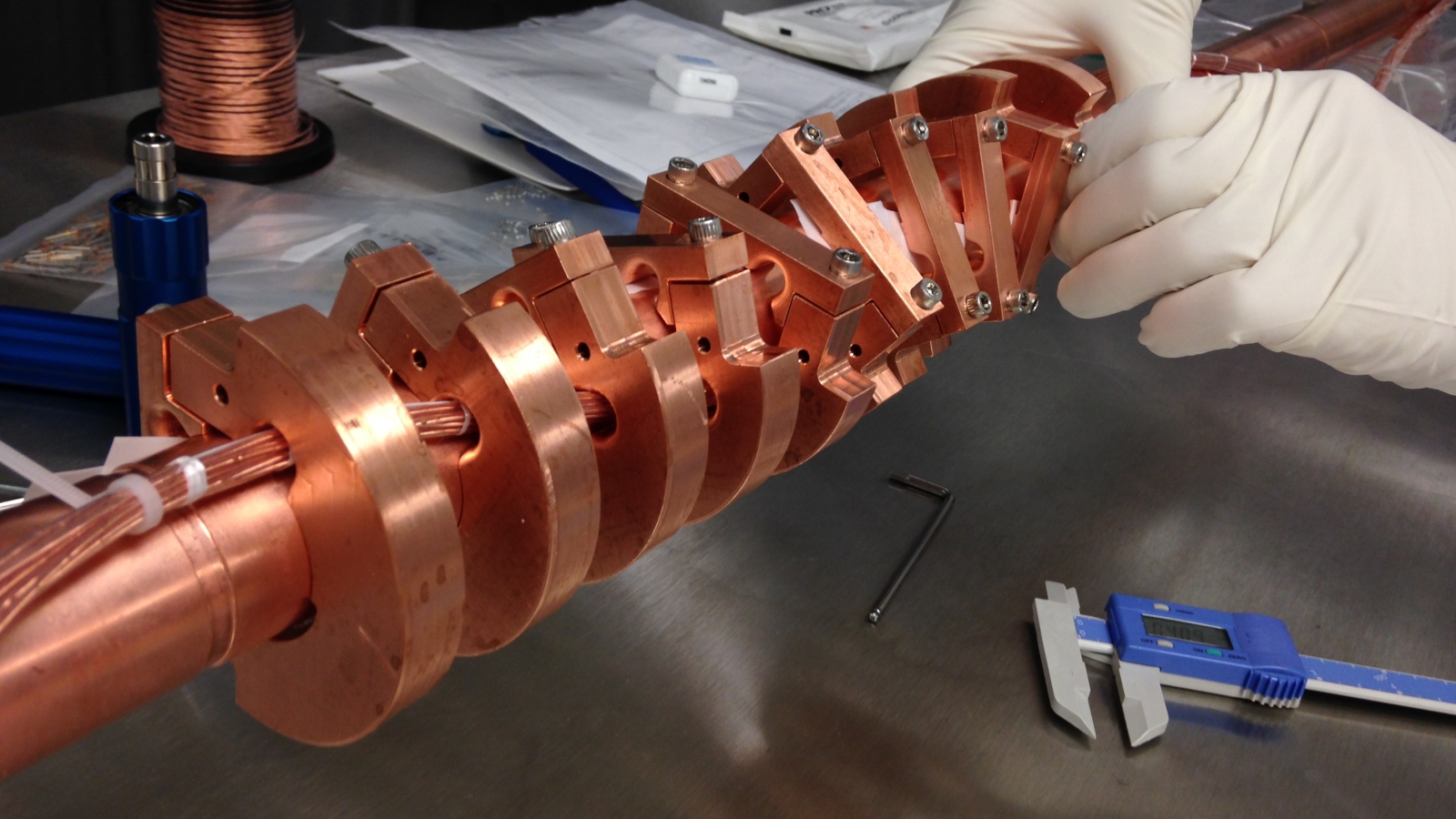 New plates were designed to hold the high-voltage cables that carry data from the detectors to data-acquisition systems.

When there’s something wrong in your experiment, who do you call? An engineer. More specifically, you call the project engineer responsible for the original design.

“We’ve had a couple of types of failures with the detectors,” said Matthew Busch, project engineer for the Majorana Demonstrator Project. “About 25 percent of the detectors are not collecting data and we figured out it’s a problem with the connectors and cables, which are challenging because of their strict low-mass, radio-purity requirements.”

The Majorana Demonstrator collaboration is looking for a rare type of radioactive decay called neutrinoless double-beta decay, the discovery of which could explain the matter/anti-matter imbalance in the universe.

The experiment, housed inside a six-layered shield deep underground at Sanford Lab, is made up of thousands of parts and pieces that vary in shape and size—from the two cryostats that hold the 58 germanium detectors (about 44 kilograms) to the high-voltage connectors and hundreds of tiny coaxial cables that connect those detectors to data-collection systems.

Most pieces in the experiment were machined from ultra-pure copper that was electroformed underground in the world’s deepest clean machine shop to eliminate most cosmic rays. And each part was designed for an experiment that had never been built before, so it is understandable that a small percentage of those parts might fail.

“When we started this project, we told the Department of Energy that with so many parts, we expected to get at least 75 percent of the detectors operating. And that’s exactly where we are right now,” Busch said. “But just because we met the minimum requirement doesn’t mean we’re satisfied, so we want to improve that.”

Using a tensile tester at the University of North Carolina, the Majorana team measured the breaking strength of the connections between the newly machined forks and cables. “That’s a step we didn’t take previously,” Busch said. “We’re adding some quality control specifications that NASA uses and it's working.”

Busch attributes the failure with the high-voltage cables to the way they are routed to the data-collection system. Right now, the cables are loosely threaded through horseshoe-shaped copper plates set along the thermosyphon tube, which helps cool the experiment. But those plates, it turns out, have a rough edge that damaged some of the fragile cables. The new plate design includes a smooth, rounded edge, which Hughes is machining. Additionally, a new cable-management system that includes tightly bundling the cables with a Teflon-like thread, will be added.

So, how do you replace parts in an experiment that are completely sealed inside a six-layered shield?

“We will have to shut down the experiment and take the shield apart,” Busch said. The team will move the cryostat from inside the shield to the glove box, then begin the process of replacing the connectors on every detector to ensure there will be no issues in the future.

Once they’ve replaced the cables and connectors, they’ll do a test in the glove box to make sure everything works before it is put back into the shield. The entire process will take 6-10 weeks depending on how things go, Busch said.

And how will that affect their already successful experiment?

“The operating detectors we have now are collecting really good data,” Busch said. “With the new connectors and cables, we expect to see a higher fraction of detectors operating and that improves our statistics.”

The new connectors and cables will also be used to inform the design of LEGEND (Large Enriched Germanium Experiment for Neutrinoless Double-Beta Decay), a much larger experiment that brings together the Majorana collaboration, members of GERDA (GERmanium Detector Array), and other researchers in the neutrinoless double-beta decay field.

Despite the issues with the connectors and cables, the Majorana Demonstrator collaboration recently announced it had achieved the ultra-low backgrounds needed to proceed with the larger experiment. Busch credits the success to the hard work of the team and the protocols put in place at the outset.

“The really satisfying part is knowing that all of the cleanliness protocols and extra steps we took to maintain the radio-purity of the copper and connectors really paid off,” Busch said.

"We put an unprecedented level of effort into cleaning technique and cleanroom protocol and it appears to have paid off in our initial dataset. For an experiment with this design, it is by far the lowest background ever achieved. That is due primarily to our electroformed copper, custom connectors, and our meticulous handling and assembly protocols.”