In 1969, a chemist by the name of Ray Davis began an experiment to detect neutrinos coming from the sun. In 2002 he would be awarded a share of the Nobel Prize for his work.

In 1965, Ray Davis began building an experiment deep in the Homestake mine with the goal of counting neutrinos, subatomic particles produced in fusion reactions inside stars. Using a 100,000-gallon tank full of perchloroethylene, or dry cleaning fluid, Davis predicted that when neutrinos interacted with the chlorine atoms, they would change into argon 37 (37Ar) atoms. Davis’s fascination with neutrinos began at Brookhaven in 1948 when he read a review paper by H.R. Crane. “Thus began a long career of doing just what I wanted to do and getting paid for it,” he wrote in an autobiographical sketch for the Nobel Prize committee.

Davis’s research initially took him to Brookhaven’s Graphite Research Reactor in New York and the Savannah River Plant in South Carolina. Then, in the late 1950s, he built a pilot experiment 2,300 feet underground in a limestone mine near Akron, Ohio. In 1965, he went deeper still—to Homestake’s 4850 Level.

Neutrinos, among the most abundant particles in the universe, go through matter like it isn't there—for a couple of reasons.. First, they are unimaginably small—about a million times smaller than electrons. Second, they have no charge, so they don't interact with charged particles. Most neutrinos pass right through the earth.

Homestake excavated a cavern for Dr. Davis on the 4,850-foot level. The Davis experiment was far removed from the Homestake ore body and from the mine's infrastructure of tunnels and shafts, but it was close enough to the Yates Shaft to provide relatively easy access for researchers. The experiment itself was installed in 1965, and soon began counting solar neutrinos.

But there was a problem. Ray Davis detected only about a third of the number of neutrinos predicted by theorists. At first, the scientific community thought the experiment must be wrong, but Davis insisted  he was right. “The solar neutrino problem caused great consternation among physicists and astrophysicists,” Davis wrote. “My opinion in the early years was that something was wrong with the standard solar model; many physicists thought there was something wrong with my experiment.”

The discrepancy became known as "the solar neutrino problem." Finally, in the 1990s, underground experiments in Japan and Canada vindicated Davis. Neutrinos come in three types, or "flavors"—electron, muon and tau—and Davis was measuring only the electron neutrinos produced in the sun. Later experiments, however, suggested that the wily neutrino can change its flavor, or oscillate, as it flies through space a near the speed of light.

The solar neutrino detector at Homestake had turned out to be remarkably accurate, and in 2002 Ray Davis was awarded a share of the Nobel Prize for Physics for his work.

A lot has changed since Davis moved to Homestake in 1965. “To my surprise, a whole new field of neutrino physics has developed in directions I never imagined in the Homestake days,” Davis wrote in 2002. One has only to look at the neutrino research at Sanford Lab and around the world to grasp just how far science has come in its search to understand this most elusive particle.

The nine members of the 2013 Davis-Bahcall Scholarship class visited the Davis Campus on the 4850 Level last week. 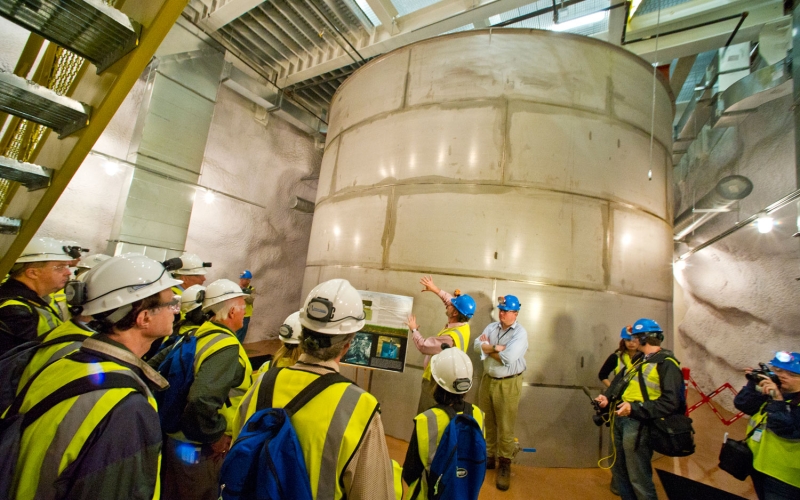