On Friday, May 13, the Davis Campus at Sanford Underground Research Facility was recognized for significant contributions to the advancement of physics 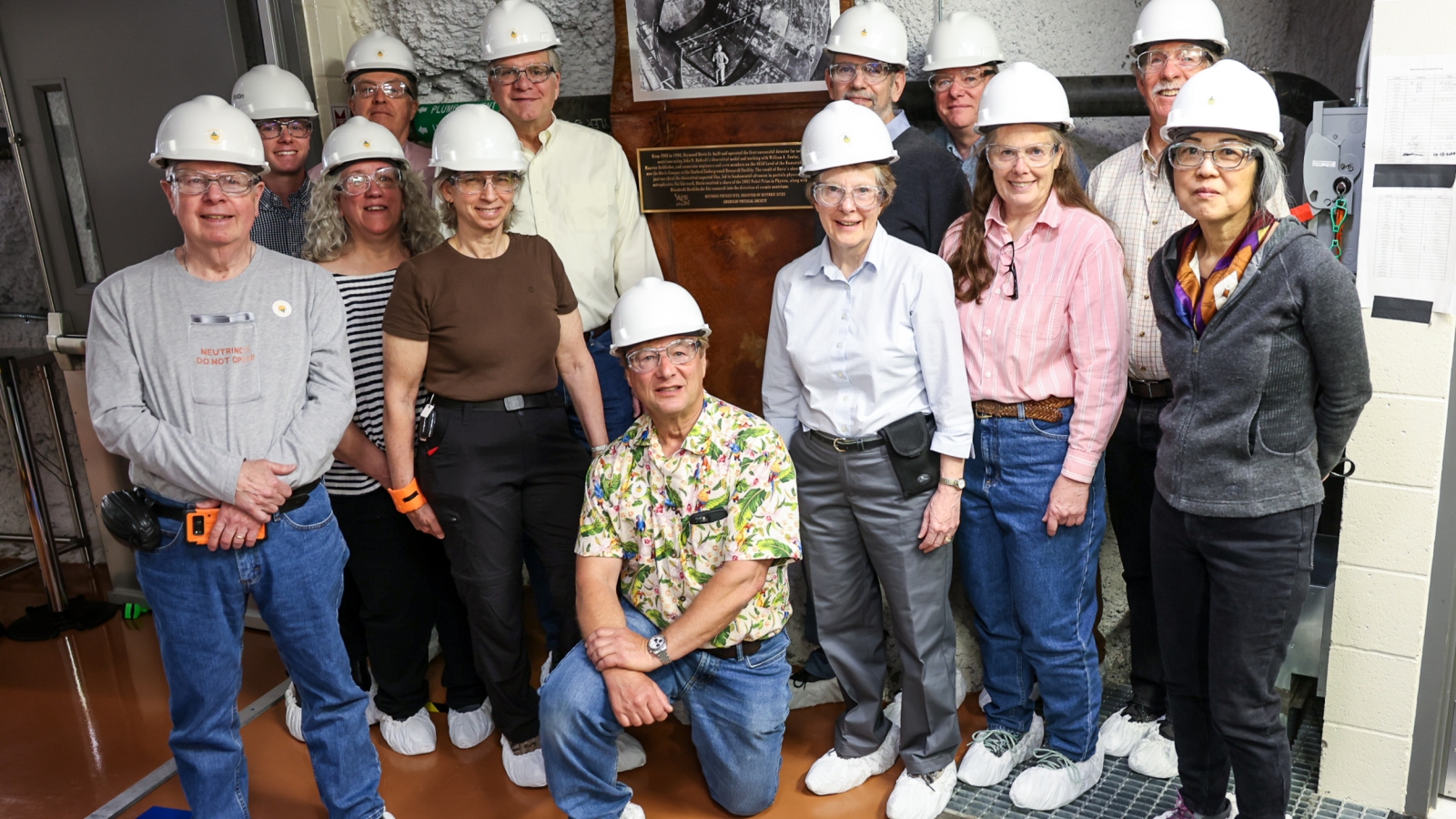 Members of the Davis family and APS surround the plaque designating SURF an APS Historic Physics Site. The plaque, along with an iconic photo of Ray Davis inside the tank that would be part of his Brookhaven-Homestake Solar Neutrino Experiment, was fabricated from a piece of the historic tank.

LEAD, SD— Maps of the Black Hills are dotted with historic monuments and memorials; the region’s newest historic site is located nearly a mile beneath the surface. On Friday, May 13, the American Physical Society (APS) dedicated the Davis Campus, a science laboratory located 4,850 feet beneath the city of Lead, South Dakota, as a Historic Site in physics.

For nearly three decades, Dr. Raymond Davis Jr. counted neutrinos from the Sun on the 4850 Level of the Homestake Mine (now the Sanford Underground Research Facility, or SURF). A chemist from Brookhaven National Laboratory in New York, Davis’ methodic approach to understanding neutrinos forever changed physics and earned Davis a share of the 2002 Nobel Prize in Physics.

“Ray Davis’ work to unlock the mysteries of neutrinos has served as an inspiration to neutrino researchers for more than five decades,” said Mike Headley, executive director of the South Dakota Science and Technology Authority, which manages SURF. “His legacy lives on in experiments around the world and in our efforts to educate the next generation of scientists and engineers. We are honored and proud to receive this designation.”

Today, the 4850 Level of SURF is home to several international experiments. The depth of the facility shields sensitive technology from cosmic rays, making it an ideal location to study particle physics and astrophysics, as well as other disciplines in the sciences.

In September 2020, the APS designated the Davis Cavern as a Historic Site in physics, in recognition of the impact of Davis’ research. The APS dedication ceremony was initially delayed due to the COVID-19 pandemic.

“We are delighted to designate SURF as an APS Historic Site,” said Jonathan Bagger, CEO of the APS. “This designation recognizes the important advances in particle physics and astrophysics that flowed from Ray Davis' painstaking experiment, carried out over a series of decades in the Homestake Mine located almost a mile beneath Earth’s surface.”

The APS Historic Sites Initiative works to increase public awareness of noteworthy physics-related events and discoveries. Each year, APS chooses a select number of member-nominated sites to be formally recognized, using a number of criteria to select the sites, including significant contributions of the site or an individual to the advancement of physics on a national or international level.

“Davis’ ingenious experiment has helped physicists understand some of the most fundamental questions in our field, and his legacy continues to serve as motivation for the next generation of scientists and engineers,” Phil Bucksbaum, who was the president of APS in 2020 when SURF was designated as a historic site. "APS is extremely proud to designate the Sanford Underground Research Facility as an historic site, a place synonymous with the ingenuity that underpins our innovation economy.”

Friday’s dedication ceremony included speakers from the APS, SURF and members of the Davis family. Davis himself passed away in 2006 at the age of 91.

Andrew Davis, the son of Dr. Raymond Davis Jr., shared about what it was like “growing up with neutrinos.” The family’s timeline of significant events includes the marriage of Ray and Anna Davis, the birthdates of their children, the publication dates of significant research papers and the family’s 2002 trip to Stockholm when their father was awarded a share of the Nobel Prize in Physics.

Andrew Davis described his father’s “lonely challenge” when the results of his experiment were not initially accepted by the physics community at large. “My family were all complete believers, because we knew what a careful guy he was, and, of course, he turned out to be right,” Andrew Davis said. “We want to thank the APS for this delightful honor.”

At the end of the ceremony, a commemorative plaque installed in the Davis Cavern was unveiled.

The plaque is mounted on a preserved piece of the Solar Neutrino Experiment and reads: “From 1962 to 1994, Raymond Davis Jr. built and operated the first successful detector for solar neutrinos using John N. Bahcall’s theoretical model and working with William A. Fowler, Maurice Goldhaber, and numerous engineers and crew members on the 4850 Level of the Homestake Mine—now the Davis Campus at the Sanford Underground Research Facility. The result of Davis’s observations, just one third the theoretical expected flux, led to fundamental advances in particle physics and astrophysics. For his work, Davis received a share of the 2002 Nobel Prize in Physics, along with Masatoshi Koshiba for his research into the detection of cosmic neutrinos.”

Sanford Underground Research Facility is operated by the South Dakota Science and Technology Authority (SDSTA) with funding from the Department of Energy’s Office of Science. Our mission is to advance world class science and inspire learning across generations. Visit SURF at www.sanfordlab.org.